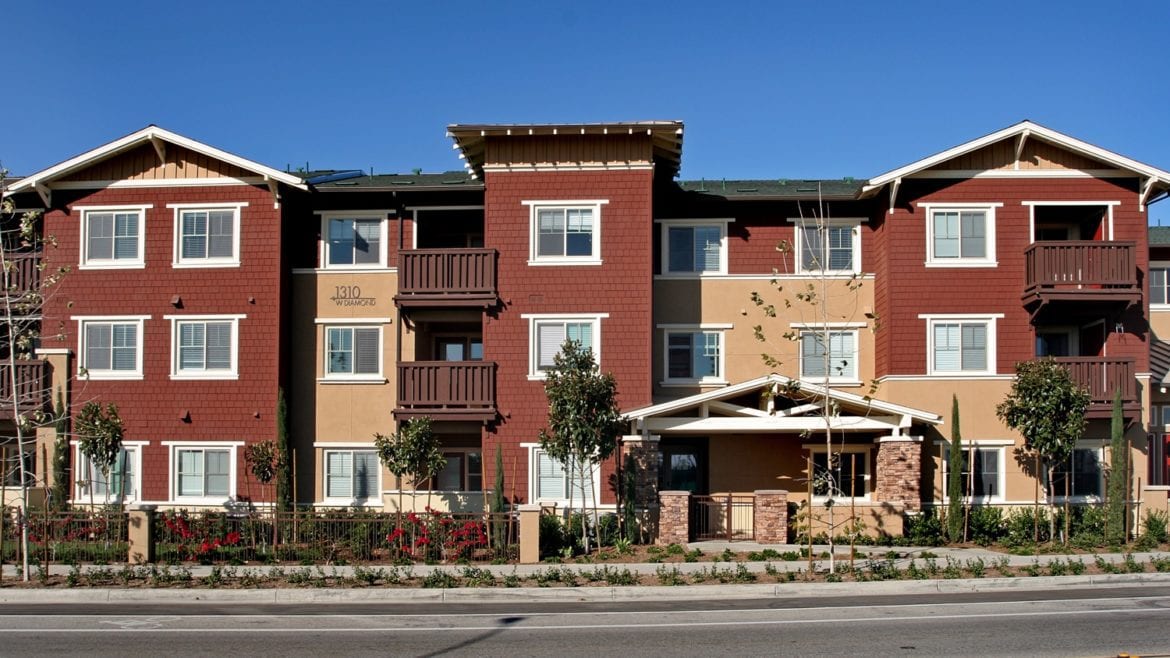 A Jamboree Housing Corp. development in Anaheim, known as Diamond Apartment Homes, which has permanent housing and mental health services for formerly homeless people. Representatives of the OC cities' association and Orange County United Way cited it as an example of the type of housing that would be built under the 2,700 units plan.

The association that represents Orange County cities said Friday it is seeking state legislation to create a regional agency of city, county, and public representatives to speed up the financing of 2,700 proposed homes with support services for homeless people.

When state funding is made available for homeless housing, local cities often end up competing against each other for the funds, said Kelsey Brewer, a legislative manager with the Association of California Cities – Orange County, during a speech Friday to a homelessness symposium at California State University, Fullerton.

“From that thought process we began thinking about, how do we regionalize the way we go after funding? And we came up with the concept of an Orange County housing trust,” Brewer said during her speech to more than 100 people who attended the symposium.

“They would be the folks that would go after those grant dollars, but would also be in charge of helping manage the dollars that we already have, in the form of Mental Health [Services] Act dollars,” and new state funding for homeless housing projects, like a new real estate transaction fee that recently went into effect.

The new agency would issue bonds to raise money for the homeless housing efforts, through a “regional approach” to accessing state and federal dollars, she added. The proposed legislation would allow mixing of private and public funds in the issuance of bonds, she added, which would allow private-sector money to be incorporated.

Heather Stratman, the city association’s CEO, said she’s working to get a draft of the bill language to the state Legislature’s attorneys Monday morning, with a likely introduction of the bill this week or early next week. The association hasn’t disclosed which legislator would be introducing the bill.

A UC Irvine cost study last year found the cost to the public is significantly less when chronically homeless people move from the streets into housing with support services – dropping from $98,000 a year to $51,000, mostly from fewer emergency room visits and arrests.

The study found a major drop in crime when homeless people are provided housing with support services, and a higher likelihood homeless people will obtain employment when they’re in housing. The average number of times a homeless person on the streets is arrested drops from roughly twice per year to near zero when they’re in permanent supportive housing, according to the study.

In February, the cities association went public with a goal of organizing leaders in government, business, and the community to create 2,700 new permanent supportive homes for homeless people over the next three years.

Also involved in the housing effort, including the trust, is the Orange County United Way and businessmen Dan Young and Bill Taormina. The two businessmen have spearheaded an effort to raise $100 million in private sector money to help pay for the proposed 2,700 homes.

One of the main goals of the proposed agency is to shorten the timelines for financing and building permanent supportive housing for homeless people, Brewer said at the symposium.

Nonprofit developers of homeless housing say it often takes two or three years to obtain the various necessary funding sources at the federal, state, and local level before construction can begin.

“What the Orange County Housing Trust is trying to do is [take] the three years it took you to get all of your financing in order, and shorten that to six months. That’s what we’re trying to do,” Brewer said. She was responding during a follow-up session at the symposium to a question from Sandra Gibbons, vice president of the nonprofit housing developer Western Community Housing.

The proposed agency would be a “one stop shop” helping to get homelessness housing projects financed, Brewer said. She emphasized it would not be a regulator of land use, an owner or operator of housing units, or a substitute for local control.

As for whether a new agency is needed, Brewer said, “I would argue that yes, we need a regional hub that deals with the financing” of affordable housing for homeless people.

A single housing trust to fund housing for the homeless has been requested by homeless advocates, including the American Civil Liberties Union, since at least 2016. Advocates have argued it would provide a way to more clearly prioritize and track development of permanent supportive housing.

“A really key piece of it is that it would be a transparent entity,” Brewer said during her speech to the symposium.

“The lawsuit that’s going on currently in the county has been really contentious, but I think there’s been a lot of great things that have come out of it…one of those being that we have to be more transparent about how we’ve been spending the dollars that have been allocated to us, and [we] have to be good stewards of those tax dollars.”

“I am envisioning that all projects and the funding provided through the [housing trust agency] would be public, on the website,” Stratman said in text messages to Voice of OC over the weekend. “Annual audit, full disclosures. An accounting of the money in and the money out.”

Asked whether there will be real-time, online disclosures of the money flows in and out of the agency, Stratman said, “I think the real time disclosures are a fantastic idea.”

Stratman said she’s “aiming to have the accountability and transparency piece written in from the beginning.”

The agency also “probably needs timeframes to spend the money,” Stratman wrote. “We don’t want to it to sit there and linger.”