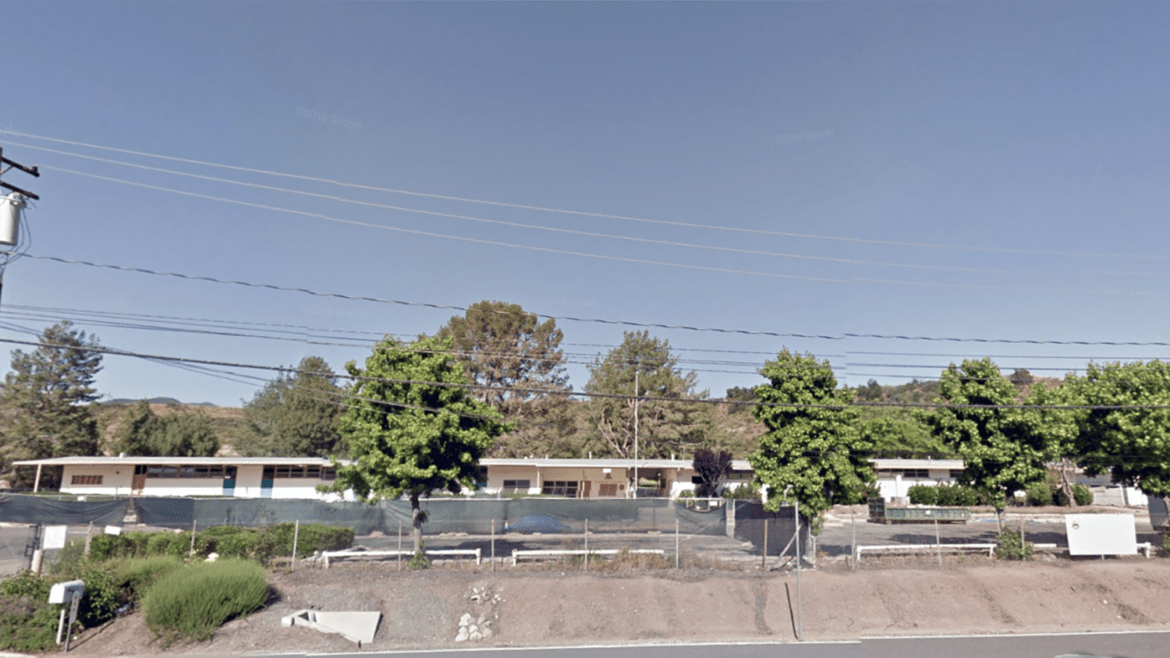 The former Silverado Elementary School, which closed in 2009.

South Orange County mayors, under pressure from a federal judge, on Thursday chose a closed elementary school along rural Santiago Canyon Road as a site they’d like to see become a new homeless shelter.

The proposed site is Silverado Elementary School, which was closed in 2009 and purchased by the county government in 2013. It’s in unincorporated county territory, about a 2.5-mile drive west of the community of Silverado. The property currently has a public library, the Library of the Canyons, as well as a preschool.

The site was chosen during “a robust discussion” in San Clemente among all 12 mayors of south county cities, said Irvine Mayor Don Wagner in a phone interview after the meeting.

In addition to the Silverado location, three south county mayors said they might have smaller sites in their cities that could accommodate around 10 to 20 people each, depending on what Carter wants, but that they all preferred the Silverado site first, Wagner said.

Wagner said he didn’t know what the capacity of the Silverado shelter could be, but that the mayors also haven’t been told how many new beds are required.

“I’ll be honest, one of my frustrations coming out of the meeting today was an inability of anyone to say, ‘Here’s how many beds you need.’ Wagner said.

“We heard 400 [from the county] when they wanted to put the tents in Irvine, we [heard] 200, 250 as a possible number today. But not all that’s emergency shelter,” and some would be transitional housing.

“Sometimes they’re talking as low as 100 and as high as 400,” Lake Forest Mayor Jim Gardner said in a phone interview after the meeting. He opposed the location, citing its proximity to a preschool and remote location.

“I don’t yet know what the real number is” that Carter says he’d need to be satisfied, Wagner said. “I don’t know if he has that number. What came out of today is we are all working together to find those beds and satisfy that number when it finally is available.”

The south county shelter proposal still is in very early stages. The mayors plan to jointly send a letter to top county officials Friday putting the site on the table and asking for help working out the details, Wagner said. The vote to send the letter pursuing the site was 10-to-1, with Gardner opposing and Mission Viejo Mayor Ed Sachs not voting because he left the meeting early.

“In my view, its a very poor site because it’s right across the street from a preschool,” Gardner said. “It’s in the middle of nowhere and it’s on a dangerously fast road that already has a history of accidents.”

Wagner said the preschool issue was on the mayors’ minds Thursday.

“I’m told that there is either a preschool or a daycare or something that is somewhat close to there,” Wagner said. That was “probably the top thing on everybody’s mind,” particularly how the county would make it safe for the preschool or daycare, and residents.

It’s one of the “unanswered questions” at this point, and is being considered, Wagner said.

Regarding the proposed shelter’s remote location, Wagner said transportation options were being explored and the county is able to provide services to people on-site.

“It is an issue, and we did talk about it,” Wagner said. Regarding the ability to provide services, Wagner said Bartlett told the mayors that the people who deliver the county’s medical, mental health, jobs and other support services are mobile and can take them where they are needed.

And regarding transportation, Wagner said: “A number of the south county cities might be willing to help with the transportation aspect if that’s a viable site. And I’m sure my constituents would be much happier with us helping transport to a site that isn’t in Irvine, as opposed to saying, ‘Hey let’s do it at the Great Park.’

“I think that’s true of most of the communities, if not all of them, in south county. So that remote [location] issue, a lot can be done to alleviate that concern.”

The county’s shelter in Anaheim, known as Bridges at Kraemer Place, does not allow homeless people to walk in or out of the facility. Instead, it has a shuttle system that transports people between the shelter and designated pick up and drop off places elsewhere.

County spokeswoman Molly Nichelson wrote in an email Thursday night “county staff attended the first half of today’s meeting and were requested to leave at the second half of the meeting by the Mayors. The County complied with the Mayors’ request and therefore are unaware of any final votes or outcomes. However, during the meeting  County of Orange CEO Frank Kim requested that the Mayors provide a list of those sites under their consideration and submit them in writing to the County.”

The supervisors’ chairman, Andrew Do, didn’t return a text message asking what his initial thoughts are on the proposal.

The proposed shelter site is within Supervisor Todd Spitzer’s district, which includes the inland canyons of Orange County. Spitzer didn’t return a voicemail and text message asking for his opinion on the proposed location.

Supervisors backed off the plan March 27 and eventually gave up on finding a site April 2, leaving it to the cities and Carter.

Wagner said the mayors now plan to report back to their residents and fellow council members, and to convene again on Thursday, May 10.

“I think the hope is the county will have responded to the letter by [May] 10th, so we’ll know what that response is and what still needs to be done on that site or additional sites. I don’t know if we’ll hear from the court or not,” and whether Carter will schedule a status conference or let this work play out, Wagner said.

Carter, who’s overseeing ongoing federal lawsuits over homelessness in Orange County, has called on city and county officials to work together to expand shelter capacity for abused women, people with severe mental illnesses, and other homeless people as the county’s existing system is overcrowded.

It was at Carter’s request that the mayors of south county cities met Thursday to try to pick one or more locations for new emergency homeless shelter beds in their cities. If they were unable to find a location for a new shelter, Carter said he would “follow the law” in the U.S. 9th Circuit’s Jones decision and ban cities from enforcing anti-camping laws against homeless people until adequate shelter capacity was available.

“I think it was a productive meeting,” said Wagner, who is mayor of the largest south ounty city.

“It was good to see all the mayors there, taking this thing seriously. And I hope that was conveyed to the court. The sense I got was that everybody that was there is very interested in participating in a way to satisfy the court that we are really trying to get a handle on this problem.”

The federal court was represented by retired Superior Court Judge James L. Smith and a couple of Carter’s law clerks, Wagner said. “I’m certainly not speaking for them, but I certainly thought that they came away recognizing that we are working very hard to find solutions to this problem. And I was very encouraged by that.”

Gardner, who was the lone dissenting vote among the mayors and has a Ph.D. in clinical psychology, said he wanted to see the sites split up into smaller ones throughout south county.

“I think the problem … is that they are trying to create a large site, a large shelter, rather than distribute the population evenly throughout the county in small numbers where they wouldn’t be noticed,” Gardner said, adding that the large grouping approach “was already discarded 50 years ago.”

“This is just the mayors and their opinion. That honestly holds no weight,” Gardner said. “The mayors have to go back to their cities and get the support [from the councils].”

“It’s very exploratory at this point,” Gardner added. “So there’s no reason to assume that this is the final outcome, but this is what’s being advocated now.”

At an April 3 court hearing with mayors from across the  Carter called on mayors to help county supervisors identify a site for an emergency homeless shelter. He made it clear that he didn’t want central and north county cities to shoulder more homeless shelters and wants a location in south county.

“If we can’t find one piece of property … that means we can never reach any kind of proportionality,” Carter told city and county leaders at the court hearing. “I wish you gave me the power and I would just pick the location, but I can’t do that. I’m a judge.”

Gardner thinks it is fascinating the proposed site isn’t in Bartlett’s district, but instead in Spitzer’s district.

Another potential shelter site that was discussed was the former Los Pinos Conservation Camp in the Cleveland National Forest. But it doesn’t seem feasible, Wagner said.

“It was talked about. For a bunch of reasons it’s probably not likely to be working out…not least of which is the county” no longer has a lease for it and permission would be required from the U.S. Forest Service.

Spitzer’s board colleagues criticized him Tuesday for previously going into other districts and building opposition against proposed emergency shelter sites. He went into Bartlett’s district when he attended a Laguna Niguel City Council meeting and Supervisor Michelle Steel’s district for a Costa Mesa City Council meeting to voice his opposition to proposed shelters in both cities.

As for how the new shelter or shelters would be paid for, Wagner said the mayors expect the county government to pay most if not all, of the costs.

“All that remains to be seen. But we are looking to the county to fund the majority of it, if not all of it, because we’re paying our taxes for that.”