The Coast to Cleveland Wildlife Corridor is a strip of continuous habitat that connects the coastal open space to the mountains, and is essential for animals to move back and forth to find genetically distinct mates.

Nobody’s arguing that there shouldn’t be a veteran’s cemetery in Irvine. In fact, both the former and currently planned locations for the cemetery are on former El Toro Marine Corps Air Station land (and neither is in the actual Great Park). The dispute is over not if, but where.

Last September, the City of Irvine agreed to a land swap with developer Five Point Communities. This moved the cemetery site to land near the Spectrum V development and the I-5/I-405 interchange. The gently sloping new site is currently being used as agricultural land to grow strawberries. In exchange, the city deeded over the parcel along Irvine Blvd, where the cemetery was originally planned. After the land swap was completed, the City deeded the new site to the State of California, which is responsible for building the cemetery.

There is now controversy over whether the land swap is in the best interest of the City of Irvine. Political squabbles aside, Laguna Greenbelt, Inc., would like the public to consider the land swap’s merits through the lens of land use principles, open space preservation, and wildlife movement. 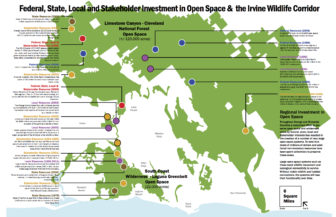 Hundreds of Millions of dollars have been invested in our public lands and open space.

Our grassroots organization has been working with the City of Irvine since before 2000, and since 2012 also with the developer Five Point Communities, to design and complete an essential wildlife corridor across Irvine to connect coastal wildlife habitat west of the I-5, to the much larger open space of the Santa Ana Mountains (including Cleveland National Forest). This wildlife corridor, that we have come to call the Coast to Cleveland Wildlife Corridor, is currently taking shape on the only possible route that will ensure that the coastal wild lands, including Shady and Bommer Canyons, and several other parks and preserves, will not wither and die over time (ecologically speaking), throwing away hundreds of millions of dollars that the community has invested over the many decades it took to set aside and manage our parks and preserves.

In mid-March, as a community, we celebrated the groundbreaking of the last stretch of the wildlife corridor between the Santa Ana Mountains and the coastal open space. In short, it’s a dating corridor for wildlife, at a time when they are increasingly isolated from one another by multi-lane roadways and urban development.

The event was important; the corridor is about 6 miles long, and the stretch under construction will be almost half of that, as it crosses Irvine between Irvine Blvd and the I-5. The so-called Great Park stretch will be entirely on the former Base, but not near the park. Instead, it will be adjacent to future urban development around the park on the East side, and, depending on the June fifth vote, it might meet the Veterans Cemetery.

When considering land uses that will be neighbors of habitat and wildlife corridors, it’s clear that some are better than others. Animals exploring for food, cover, and water are spooked and avoid moving towards noisy areas with human activity, lights, cars, unfamiliar smells, and domestic pets. Land uses that are quiet at night and minimize human activity near a wildlife corridor are favorable for animals moving through the area, allowing them to continue on their journeys.

In general, a cemetery is one of the best complementary land uses for natural areas and wildlife; a dark and quiet place at night, when many animals are active. However, in real estate, it’s all about the location, and one of the sites proposed for the Veterans Cemetery is much better than the other for animals traveling along the corridor.

A cemetery built on the strawberry-growing site would be bisected by the wildlife corridor, greatly increasing the amount of green space available to the animals. The lush greenery of the cemetery would help support wildlife to feed and mingle before moving on.

In contrast, the original cemetery site on Irvine Blvd is not near the wildlife corridor, and would have no benefits for wildlife movement or encouraging genetic mixing. Animals moving downslope from the mountains that found their way to the cemetery across busy Irvine Blvd would be blocked from moving safely inland or seaward. Surrounded by urban development and Irvine Blvd on all sides, the cemetery would be just another isolated fragment of open space.

The health and future of wildlife and their habitat in 22,000 acres of coastal parks rides on the success of the wildlife corridor. The land swap supports the bottom line, too: In sheer dollars, so much has been invested in our public lands, don’t we want to protect our investment? We urge Irvine voters to approve the land swap in June, and vote yes on Measure B.

Learn more about the Coast to Cleveland Wildlife Corridor at wildlifecorridor.org.

Elisabeth M. Brown, PhD is a biologist and the president of Laguna Greenbelt, Inc. She has resided in Orange County for 51 years. Elisabeth’s involvement in managing local wildlands has included founding roles in the Nature Reserve of OC and the Coastal Greenbelt Authority.

Gabriela Worrel is the outreach coordinator at Laguna Greenbelt, Inc and a freelance writer. She is a Southern California native currently living in Los Angeles, and holds degrees in biology (Westmont College) and urban planning (UC Irvine).

For a different view on this issue, consider