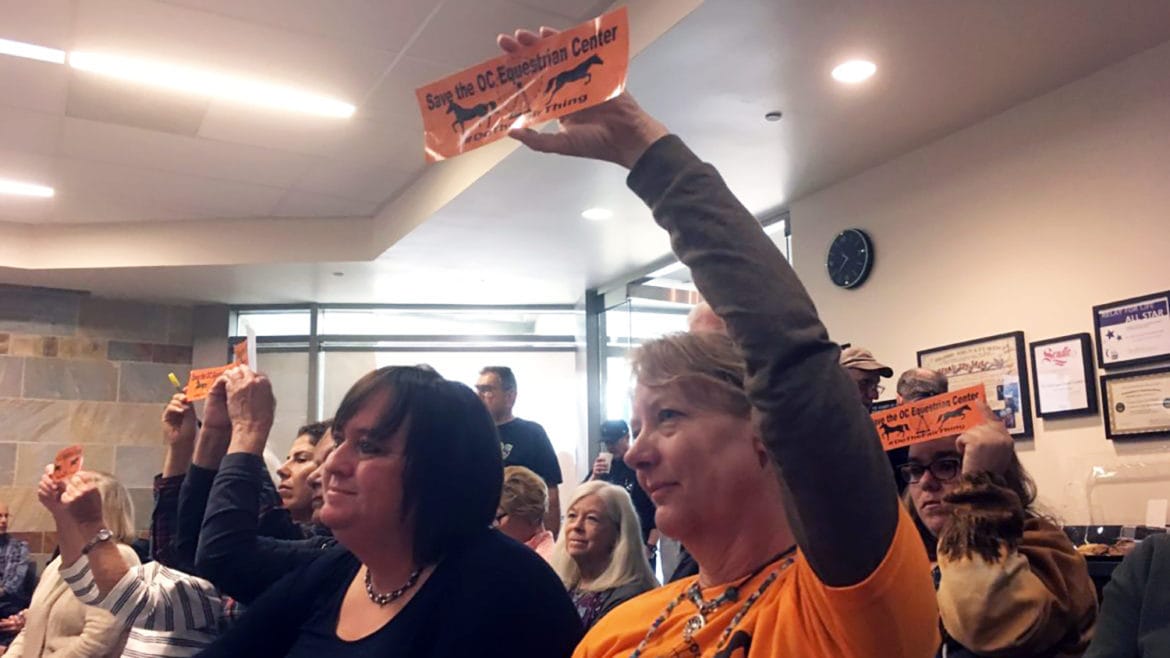 Leigh-Ann Wagner-Kazolas and Kim Stanford (left to right) attend the May 24 OC Fair and Event Center monthly board meeting, organizing activists to fight efforts to demolish a longtime equestrian center from the OC Fairgrounds.

It appears Orange County’s Fairgrounds may have been quietly privatized a long time ago.

The public just came around to that stark realization this month.

As I’ve written before, it seems as if the real owner of the fairgrounds is the fair industry, which works to ensure that industry assets such as like the 150-acre OC Fair and Event Center in Costa Mesa are protected by a bureaucratic deep state, apparently run out of the California Department of Food and Agriculture (CDFA).

That odd relationship – where a series of state vendors and agencies essentially control a taxpayer-owned asset in the midst of a local city – was on full display during the battle to privatize the fairgrounds during the Schwarzenegger Administration from 2009 through 2011.

Depending on the week, there was a different array of vendor collectives trying to purchase the property – all of whom would partner to some degree with either a block of fair executives, fair board members or mysterious state officials – to buy the land.

Over time, serious questions arose as to who really owns this property – the Governor, his Fair Board appointees, the Fair Industry, the California Department of Food and Agriculture, the 32nd District Agricultural Association.

At one point during the failed sale process, there was even an argument over who held the original title, a point of contention that was never fully answered after the Schwarzenegger Administration expired, public lawsuits were dropped and Gov. Jerry Brown took over.

Now while Brown did change out virtually the entire Schwarzenegger board, appointing the most diverse fair board in recent memory, it seems he didn’t really address any of the outstanding issues about the property or its relationship to broader Orange County.

That is a critical mistake and one that is coming back to haunt the fairgrounds.

The oversight was on full display earlier this month, as I attended another heated public meeting at the OC fairgrounds – a beat where our newsroom began back in 2009 – watching horse enthusiasts struggle to have their 7-acre facility saved from secretive efforts to write them out of a future master site plan for the fairgrounds.

It was also noteworthy to see fair board members themselves – supposedly the crème of the OC political community as gubernatorial appointees – struggle to stay relevant, openly questioning their own staff attorney, who seemed to represent more the interests of OCFEC executives and CDFA.

Again and again, at the May 24 public meeting, fair board members were restricted in their ability to place items on the formal agenda for action.

Director Nick Berardino was restricted in placing an item on the agenda to appoint a special performance auditor to look into operations.

When Director Douglas La Belle thought he had placed another item up for action, he was told it was listed only as discussion.

Another board member, Stan Tkaczyk, was even admonished by Board Chair Barbara Bagneris for speaking directly to the audience.

The fair staff attorney, Josh Kaplan, an Assistant State Attorney General assigned to the fair board, all but announced to them as a group that CDFA is the governing authority for all fairs across the state and their decisions cannot be appealed.

Truly full circle for a fair board that effectively took over the property following a stinging battle over privatization that was all about local control.

Now while Brown’s appointees did seem to give the property more community focus, this month’s debate showed that the tide may have turned back in favor of the professional staff at OCFEC and the fair industry, which provides the majority of executive salaries at the fairgrounds.

Nowhere is that more clear that on the secret effort that has arisen to rid the property of equestrians – ironically the same group the Schwarzenegger Administration tried to eliminate.

Fair board appointees have asked a series of important questions about how the effort developed to steer consultants into suggesting that the horse community be taken out of the property in favor of RV parking for vendors.

“Who told Johnson Consulting to demolish the equestrian center?” is the question horse stable activist Lisa Sabo – who also battled Schwarzenegger’s fair board – demanded to know in public at the last meeting.

Fair board members officially voted to cancel those efforts at the last board meeting, with Tkaczyk noting publicly that the consultants never met with him despite reports indicating that some members were consulted.

Fair Board member Ashleigh Aitken questioned the gross overestimates for replacing equestrian facilities and the entire process – demanding a series of public records.

There are also mounting questions about why a local fire marshall was called out to the equestrian center after horse riders protested – apparently at the direction of Board Chair Bagneris – which triggered an evacuation order on stable properties that have been inspected a dozen times without incident.

And fair board members now want an end to a practice that has been employed for some time to allow two board members to conduct fair business as subcommittees. Given all the recent secrecy, board members seem to be moving back to establishing three-person subcommittees – which triggers the state’s public records laws requiring transparency on any deliberations.

La Belle also moved to end the staff practice of listing things as “discussion-only,” which restricts board action. La Belle, a former city manager, demanded things from now on always be listed as action items to enable direction.

“Staff just does what they want,” said longtime Fair activist Reggie Mundekis, questioning why the fair doesn’t publish safety stats from the summer fair on incidents or why sales taxes to local jurisdictions seem flat despite rising revenues.

While Aitken has worked to keep a positive approach to the controversy, saying the debate is helping answer questions, offer direction and motivate volunteerism, she also is asking the most important question.

“How did we get here?” Aitken asked.

The answers to those queries should shed a ton of light on who is really running the property.