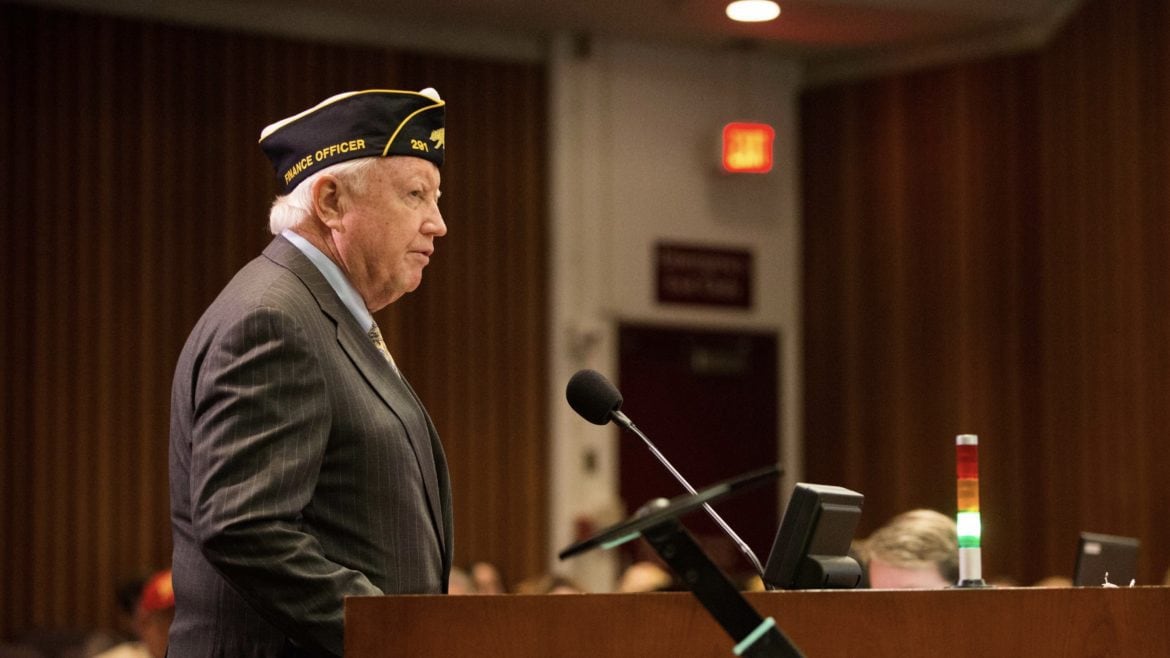 Robert Brower, a U.S. Army veteran who served in the Vietnam War, speaks in favor of studying a potential veterans' cemetery site in Anaheim, at the county supervisors' meeting on Tuesday, June 26, 2018.

Orange County’s first veterans cemetery could be built next to the 91 freeway and 241 toll road in Anaheim Hills, after county supervisors, in a public meeting Tuesday, directed staff to begin studying the roughly 290 acres of county land.

The supervisors originally planned to discuss the potential cemetery site in closed session, but changed their minds after a Voice of OC story quoted its open government expert consultant, Terry Francke who said holding the meeting behind closed doors would be a “very fundamental violation” of California’s 65-year-old open meeting law, the Ralph M. Brown Act.

During the Supervisors’ meeting County Counsel Leon Page referred to Francke as “a well-known, respected expert in open government law” and advised the supervisors against taking up the matter in closed session.

“So because of the (legal) risks, I would caution the board about recessing into closed session on this item. I think the better approach would be to simply delete the item (from the closed session agenda) and then to give direction to staff as appropriate in public,” Page said.

The veterans cemetery item remained on the closed session agenda along with other items when the supervisors went into their private meeting, although they said they wouldn’t discuss it.

As supervisors moved from open to closed session, Voice of OC reporters asked Supervisor Todd Spitzer if there would be any discussion of the property or proposed cemetery in closed session, given the item was not deleted. Spitzer said “no.”

“I want to keep the dots connected,” said Spitzer, who put the item on the agenda and wanted to keep it listed, even if they didn’t discuss it behind closed doors.

But after the closed session, Page announced the item had been deleted from the agenda.

Veterans Alliance of Orange County (VALOR) President Nick Berardino, a combat Marine in the Vietnam War, told supervisors during public comment veterans wrote a “blank check” for the country and asked the Board of Supervisors to conduct  the “simple study” of creating the cemetery on the county-owned land by the 91 freeway and 241 toll road.

“When these brave men walked over here today — we could barely walk. Most of us are disabled,” Berardino said, looking back at veterans in the audience. “We could barely get here. That’s pretty sad, but it’s the truth. Now it’s our turn to ask you to help us. To ask you to step forward.” 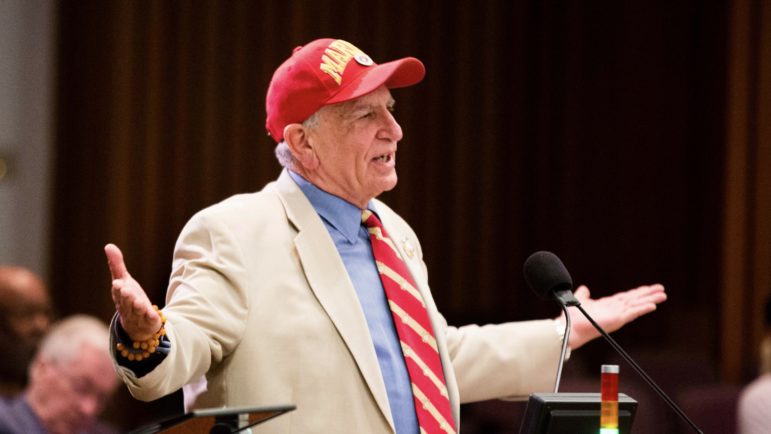 Nick Berardino, president of the Veterans Alliance of Orange County, speaks to supervisors about the potential cemetery site at Tuesday’s meeting.

The county’s first veterans cemetery was slated to be in Irvine after the City Council opted for a land swap with developer FivePoint Holdings last June. The city was going to trade land near the heart of the former El Toro Marine Corps Air Station — the original cemetery site — for agricultural land near the 5 and 405 freeways.

But Irvine voters rejected the land swap this year in the June 5 primary election after a heated ballot petition campaign that challenged a land use ordinance required for the swap.

“Obviously we’ve kind of seen a lot of drama involving this issue over the last few years, culminating with the recent election,” Supervisor Shawn Nelson said.

Nelson said the county’s proposed cemetery site could be complex because different agencies will have to coordinate with each other and the county will need to identify funding.

“This may be just exactly what the doctor ordered. Perhaps we’re in the right place at the right time,” Nelson said, but he added “This is not going to be simple.” 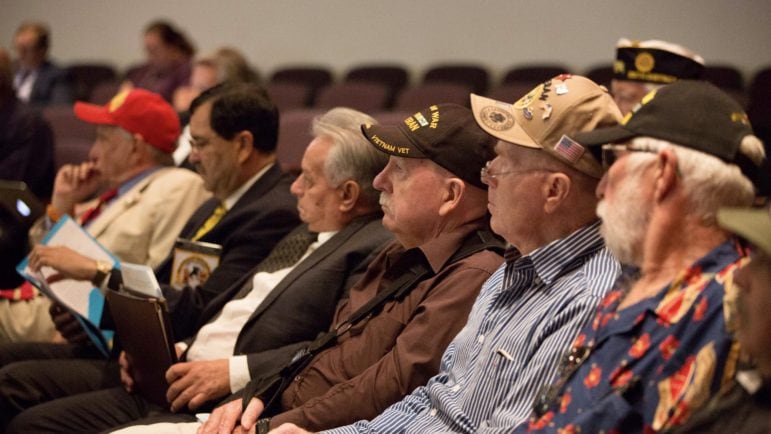 “I think we’d all love to have a veterans cemetery in Orange County. It would truly be an honor… but the timing of things is also very important,” Bartlett said. “At the present time, I’m getting conflicted input from different city elected officials, particularly in Irvine.”

Bartlett didn’t specify who she spoke to from Irvine.

Spitzer said the new proposed site has been county owned for nearly three years and a veterans cemetery wasn’t an idea there until VALOR approached him June 18.

“If we wanted to get involved in all the other issues percolating in this county, I could’ve came forward in the last three years and pushed my way into this dialogue. Never did it,” Spitzer said.

“I am supportive of a veterans cemetery,” he said. “But I am very troubled by the way this is done.”

Raising his voice, he continued “The grandstanding way that it is done. We have engaged in a lot of projects that are sensitive in nature, that require the input of a lot of stakeholders. For God’s sake – with homelessness, with the shelters, with treatment centers, with the crisis stabilization units. We all know how sensitive these issues are, and the locations and the way we handle them.

“So don’t tell me that this it the only way to proceed. We could have done this study, no problem. But now, the way that it’s put here – and I have had political people tell me that they would like to take the pressure off of Irvine and put it on our neck, because they have some political things that they want to accomplish elsewhere. That is offensive…”

Do said, “If we don’t respect the process, then everything we do up here can be done like this, where we agendize it, and we grandstand, and then we put our colleagues in [a] bullseye. And so we will move forward, we will do the feasibility studies. But make no mistake about it, we have Yorba Linda – this property is right at the border of other cities. Okay? And we all know how sensitive this is. So, we will do the study. But understand we’ve got a lot of people that [are] going to speak up, that [are] gonna push back, that [are] gonna tell us their position.

”And I’m telling you, I will do everything I can to repay the veterans for all the sacrifices that you [veterans] have made on our behalf. But understand the complexity and the landscape within which we operate. And so, I agree with my colleagues that it’s long overdue. We need a veterans’ cemetery.”

Spitzer told Voice of OC after the cemetery item and before going into closed session, he didn’t think the criticism was leveled at him, but at the politics in Irvine.

“I think he (Do) got a lot of phone calls from people who are lobbying behind the scenes to deal with political issues. He wasn’t talking about me, he was talking about the politics in Irvine. There’s a lot of different interest groups that are trying to use the cemetery issue in Irvine for different purposes,” Spitzer said.

“The point of coming forward today is to say we’re not going to have any part of that. We’re going to run a process that has nothing to do with Irvine,” Spitzer said.

But Do said his criticism was “absolutely” about Spitzer.

“The item was agendized by him,” Do said Wednesday in a text message to Voice of OC.

“This attitude of going behind the Board’s back, being transactional and willing to throw his colleagues under the bus anytime it helps his grandstanding and pandering purposes shows clearly why none of his colleagues on the Board feels we can trust him with the future of our county’s law enforcement,” Do said.

Spitzer is running for district attorney in the November election. All four of Spitzer’s colleagues on the Board of supervisors, including Do, have endorsed Spitzer’s opponent, incumbent DA Tony Rackauckas, according to Rackauckas’ campaign website.

Veterans have been fighting for years to get a cemetery in Orange County. Currently the closest veterans cemeteries that aren’t full are in Riverside and San Diego counties.

“We’ve been working in some form or another. Sometimes just as voices crying in the wilderness, sometimes as an organization… pursuing a veterans cemetery in Orange County,” said VALOR member Bill Cook, a former Marine and Vietnam Veteran who worked with state legislators to help secure the original site in Irvine. 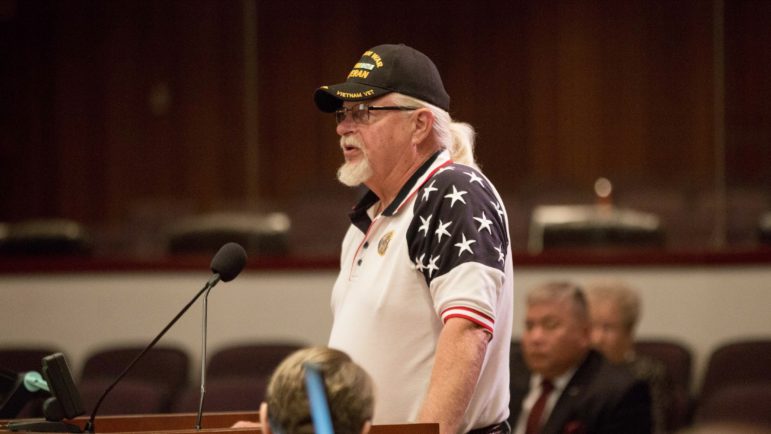 County staff is supposed to report back to the supervisors by Aug. 14 and were directed to work with different veteran groups around the country, like American Legion and Veterans of Foreign Wars and to also work with the Orange County Cemetery District.

After the board acted on the cemetery issue, Berardino told Voice of OC “veterans are removed from the political equation and now heading in a practicable, reasonable direction to give all the brave men and women a final resting place.”

Spencer Custodio is a Voice of OC reporter who covers south Orange County and Fullerton. You can reach him at [email protected].