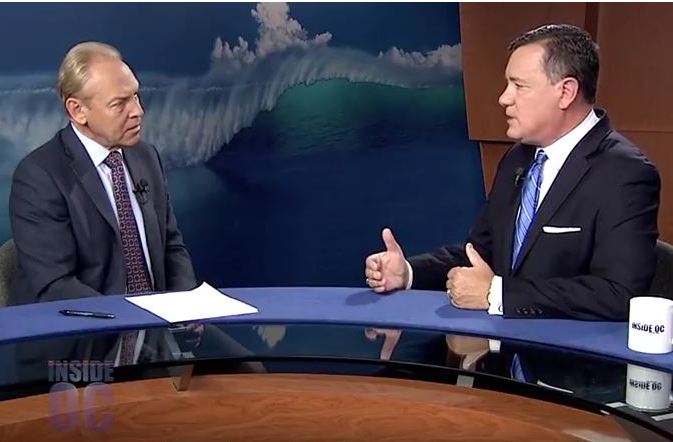 Irvine Mayor Donald Wagner says he’s confident that, one way or another, his city will continue to be served by the Orange County Fire Authority despite its decision to leave the OCFA by July 1, 2020.

“We’re not likely to see, and we would not have taken this step if we would see, any diminution in fire services provided to the city,” Wagner said on the “Inside OC with Rick Reiff” public affairs program.

“There is no complaint about the quality of service that the Orange County Fire Authority provides. They do a great job for us. But we are paying well beyond what those services are,” Wagner said. He called it “fiscally responsible” to seek a better deal with OCFA.

In the interview, Wagner also:

Wagner said if Irvine fails to cut a new deal with the Fire Authority, the county of Orange is required by law to provide fire protection for Irvine and the county is “almost certainly going to contract with OCFA.”

Wagner did not say how the city might get a better deal through that arrangement, nor did he suggest that Irvine start its own fire department.

Irvine is locked into a property-tax formula that requires it to pay more to OCFA than it receives in services – $100 million more over the next 12 years by the fire authority’s own estimate, Wagner said.

In 2014 the county successfully sued to stop a rebate scheme worked out between Irvine and the OCFA. Rather than be stuck with the existing arrangement for another 12 years, the city recently opted to leave the authority, effective in two years.

“It does give us the opportunity to continue the talks that otherwise had no chance to go anywhere. … Hopefully we get back to the deal that we’d worked out a few years ago, that the court put a stop to, in a way that involves all of the parties,” Wagner said.

Complicating negotiations is OCFA’s unfunded liability for retired firefighters, estimated at a half billion dollars. Over the past four years the authority has allocated an additional $56 million toward the pension debt.

The mayor said he shares the frustration of residents stuck in traffic, but warned that a movement to subject most projects to popular vote would all but kill economic growth in the city: “I favor responsive managed growth that is consistent with the master plan and I think that’s where the the citizens are.”

He blamed past Agran-led city councils for approving non-conforming projects that have worsened traffic, particularly in the Irvine Business Complex near John Wayne Airport. “This council has stopped that,” Wagner said. Now Agran “is trying to co-opt the no-growth movement,” he said.

Asked if he thought Agran would challenge him in November’s mayoral election, Wagner said, “That’s up to him… Anyone is free to run.”

Agran forces scored a win in June when voters overwhelmingly rejected Measure B, killing a council-approved land swap that would have shifted the site of a proposed veterans cemetery at the Great Park. The anti-B campaign focused on concerns over increased neighborhood traffic from resulting development at the original cemetery site.

In the wake of the Measure B rejection, attention has shifted to placing the cemetery on county-owned land in East Anaheim.

Wagner said while veterans and council members still favor a cemetery somewhere on the former El Toro Marine base that includes the Great Park, there are “no realistic prospects” for raising the estimated $77 million needed to build the cemetery on the original site.

“If the Anaheim facility ends up working better fiscally, if the state gets behind it, if the federal government gets behind it, it still gives the veterans a real respectable place,” he said.

Wagner said the city has retained a consultant and is talking with the Smithsonian Institution about putting a museum on part of the 260-acre Cultural Terrace at the Great Park. The Smithsonian will provide the “treasures” to display, but the city needs to work out the financing, Wagner said. He said the museum would likely focus on natural history, including dinosaur exhibits.

OC cities are under court pressure to address the homeless problem, but Irvine residents have protested against homeless shelters.

“The people of Irvine are very compassionate and have done a lot for supportive housing,” Wagner said, ticking off Illumination Foundation, Families Forward and Second Harvest Food Bank as three Irvine-based entities that assist the homeless. But he echoed residents’ concerns:

“The county said, ‘Oh my gosh, we have a problem, we’ve got to respond immediately, let’s do tents in Irvine,’ to which people said, ‘Wait a minute, all you’re doing is taking up the riverbed and the courthouse lot and moving it to Irvine and we don’t want that here.”

Wagner said the city has offered a single unidentified site for a shelter that would accommodate between 10 and 50 people. But he said Irvine is working with other cities to establish a major shelter elsewhere in South County and is committed to providing transitional housing for the homeless. He said close to 15% of Irvine’s housing stock is for low-income people.

Wagner’s comments were made in a televised interview and a post-show discussion. The show is airing this week on PBS SoCal, KDOC and Cox and is also available on YouTube. The post-show “Open Mic” segment is also on YouTube.