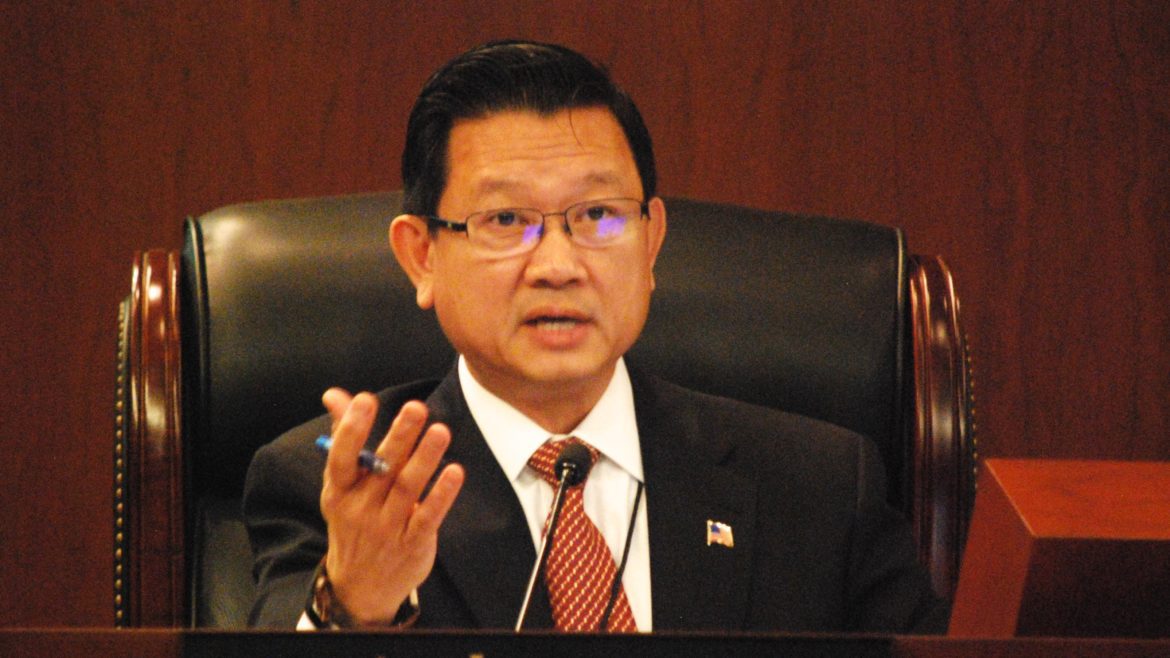 Supervisor Andrew Do at an Orange County Board of Supervisors meeting in October 2017.

Do’s 1.2 million mailers to specific voters in his district, which often highlighted his name, later prompted the state Legislature to make it illegal for local governments, such as counties, to send out government-funded mailers featuring elected officials within 60 days of an election.

Do’s taxpayer mailer spending ramped up in the months before the June 2016 primary election, and then dropped off after the primary. The spending then ramped up again ahead of the November election, which Do won by 0.4 percent. After he won re-election, Do stopped spending taxpayer money on mailers for at least the next several months, according to the county data.

The July 6 “warning letter” to Do came more than two years after the California Fair Political Practices Commission (FPPC) opened its probe.

In its letter, the commission’s top enforcement official, Galena West, said 13 of Do’s 15 taxpayer-funded mass mailings did not violate the state’s Political Reform Act, which the commission enforces.

“In all but two instances where Mr. Do’s name appeared on a mass mailing, it was either part of the letterhead, or in conjunction with an announcement of a meeting or event, and therefore was permissible,” wrote West, chief of the commission’s Enforcement Division.

In those two cases, the mailers’ stamp mentioned “Orange County Board of Supervisors District 1,” which West said violated the law, but that the mention was “inconspicuous and not likely to be noticed.” Commission staff declined to pursue enforcement action, instead issuing a warning to Do.

“If you take a step back and remember what the allegations initially were – that this was improper campaign activity – on that point, Chairman Do has been completely and entirely exonerated,” County Counsel Leon Page said in a phone interview.

Ethics experts had questioned whether Do was improperly using taxpayer dollars to promote his name during his re-election.

“This was not an abuse of taxpayer funded mailings,” Page said in the interview last week. “This was not campaign activity by another name. This was legitimate government outreach to alert constituents to important county functions.”

As he faced a tight re-election in 2016, Do’s office spent more than $246,000 in taxpayer money sending 1.2 million mailers featuring his name to voting households.

SB 54, the new state law in response to his mailers, passed unanimously in both houses of the state Legislature in 2017, was signed by Gov. Jerry Brown, and took effect Jan. 1, 2018.

Many of the 2016 mailers prominently featured Do’s name, such as one that declares, “Orange County Supervisor Andrew Do is Helping the People of Orange County Find Their Unclaimed Property.” Do’s name is highlighted twice in large, bold font. 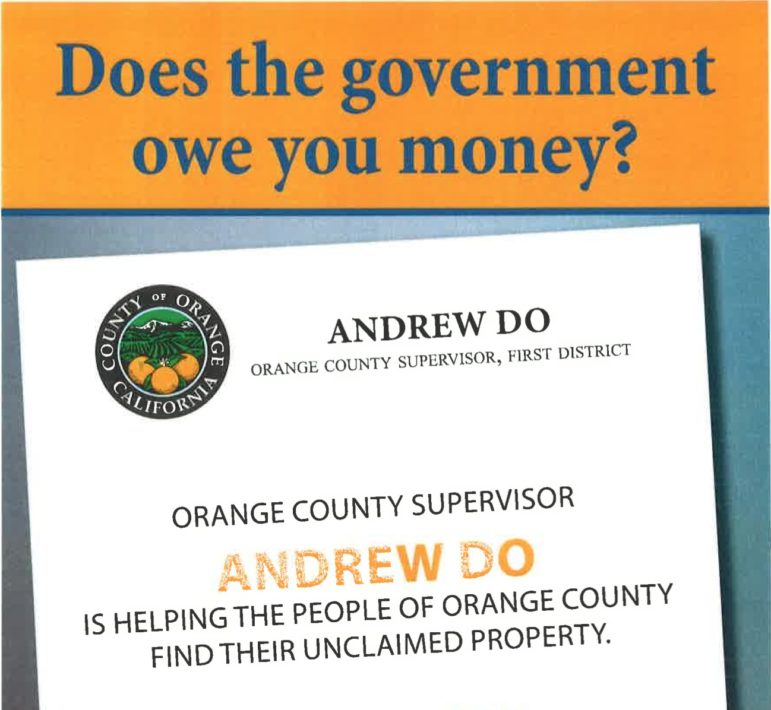 An example of one of the taxpayer-funded mailers sent out by the county. The mailer was an invite to an event about unclaimed property.

And county records indicated many of the taxpayer-funded mailers were targeted based on detailed voter databases, an approach normally used by political campaigns.

Do’s then-chief of staff Brian Probolsky, who was also working on Do’s election campaign, obtained voter data from a political information firm to target the taxpayer-funded mailers, according to county records.

The firm specializes in preparing voter databases for political campaigns to target mailers and other communications to voters. It also sells a constituent management database for elected officials that is based on voter data.

Voter registration data can be a powerful tool to target a mailer toward specific groups of people, such as the most active voters, known in the industry as “high propensity voters.”

The voter mailing lists that Probolsky requested were intended for county-funded mass mailings to specific types of people within Do’s district, according to the invoices. County invoices describe the mailing lists with names like “Spanish 40-56,” “Vietnamese,” and “Prop 13 mailer.”

All of Do’s 1.2 million county-funded mailers were printed and mailed using the same political mailing companies that are used for Do’s re-election campaign, county records showed.

In response to questions at the time, Do issued a statement about the public benefits of the events the mailers invited people to.

“We’ve tried to change the culture at the county – to get bureaucrats out of their cubicles and into our community,” Do said in the statement. “I’m proud that our community events have helped working families find jobs, expanded access to health care for patients in need, and educated parents about ways to protect our children from violent predators.”

FPPC spokesman Jay Wierenga declined to release the commission’s copy of the July 6 warning letter to Do, citing FPPC rules. Those rules, he said, do not allow the FPPC to publicly disclose warning letters until at least 10 days later, while the recipient decides whether to exercise their right to a hearing.

Page, the county’s attorney, said “Chairman Do’s desire – and certainly my obligation – is to ensure that mailers that go out comply with the requirements of the law. And as the law changes so will our advice.

“The one ticky-tack item that the FPPC noted, and that formed the basis of their warning, was something that was not done at the behest” of Do, Page said, referring to the stamp reference to Do’s office.

The stamp language was added by county staff, Page said, and “simply related to an internal accounting mechanism” for the Orange County Community Resources department, which handles the mailing of these “constituent notices.”