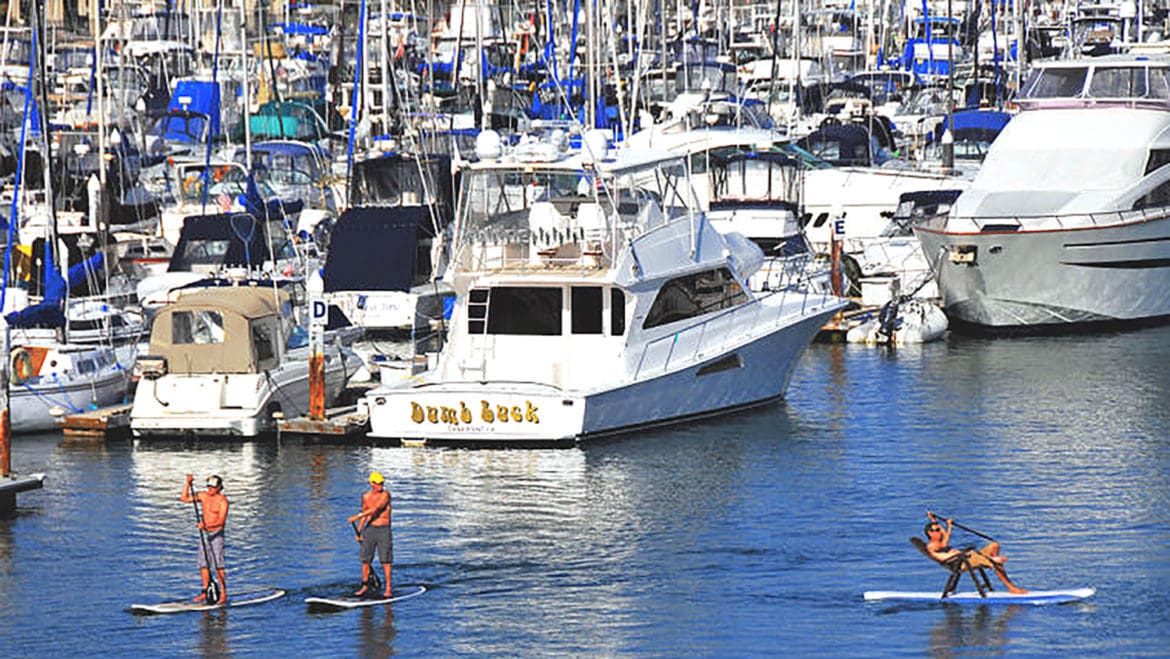 Dana Point Harbor is in the midst of a controversial revitalization effort.  (Photo by: Flicker user "chanmelmel")

The long-awaited revitalization of Dana Point Harbor, two decades in the making, will move forward after Orange County supervisors Tuesday approved a 66-year lease agreement to develop the Harbor through a public-private partnership.

Separately, officials said, the costs of the Sheriff’s Department’s Harbor Patrol in Dana Point Harbor, which currently are fully covered by harbor revenues, are projected in the future to use hundreds of millions of dollars meant for parks all around the county.

“The harbor is over 47 years old…We’ve tried to use Band-Aids over the years to keep it together, but now is the time to move forward on a major revitalization project,” said Supervisor Lisa Bartlett, whose south county 5th District includes Dana Point.

The approval is a major step forward for one of the county government’s largest projects, which has languished in the planning phases for more than 20 years. Most of the structures at the harbor were built in the early 1970s, and need major infrastructure upgrades and renovation.

Under the 66-year agreement, the developers will spend an estimated $337 million constructing and redeveloping the county-owned harbor, and pay $717 million in rent to the county. In turn, the county will subsidize the construction of a dry boat storage facility with $20 million in public dollars, and foot the bill for $1.2 billion in operating costs over the term of the lease, most of which are expenses for the sheriff’s harbor patrol.

“County staff has done a remarkable job to date in the negotiations to achieve building-out a new harbor without any public financing, providing revenue to the [Dana Point] tidelands trust…and ensuring our public facilities remain with the county,” Bartlett said.

What’s still unclear is how much of the projected $1.2 billion in county expenses for the harbor over the next 66 years will be covered by the money generated in the harbor, and how much will come out of the county parks fund, which supports parks all over the county.

Supervisors said the proposed project would significantly help in paying the costs. But even with the development’s additional revenues, the county staff report leaves nearly $500 million in county costs at the harbor for which there is no revenue identified to pay for it. Most of those projected costs are for the Harbor Patrol, which currently is fully funded by revenues generated at the harbor.

“These shortfalls will require funding from another county fund/funds and evaluation of options for additional revenue-generating activities or expenditure reductions to support operations long term.”

According to staff, any shortfalls in revenues generated at Dana Point Harbor would come from countywide parks money.

In his memo, Mayer said the Dana Point Harbor fund, which has been built up to its current $55 million over the last several years, is projected to be drawn down going forward, and “are expected to be depleted” after ten years. This will allow time to find alternative funding sources, he wrote.

Based on the current trajectory, including using countywide parks funds to pay for Dana Point Harbor, “park operations and capital for improvements will experience constraints over the 66-year term of the lease,” Mayer wrote. Options to reduce the effect on the countywide parks funds “will need to be explored,” he said, including possibly restructuring the harbor patrol.

After several requests, county staff haven’t provided information about how much of the $1.2 billion is expected to be paid for out of which fund.

Most of the 12 speakers at Tuesday’s meeting were Dana Point business owners, residents and boaters who support the project, many of whom said it is long overdue and the developers have proven themselves to be trustworthy.

“Since 1998, I’ve been telling my customers: Construction will begin in the next five years, and we’ll see a new harbor soon,” said Jim Miller, president of the Dana Point Harbor Merchants Association and owner of the Coffee Importers cafe at the harbor.

“We’ve had enough public input,” Miller said, citing over 150 public hearings he said he’s attended over the last 20 years. “We are ready to move. People today are wanting to see this new harbor happen.”

Conservation advocates raised concerns that costs related to Dana Point Harbor will negatively impact resources available to parks countywide. The county recently finished paying off debt related to the 1994 bankruptcy, which had taken funds away from county parks and other departments.

“Orange County parks should not absorb the financial impacts for the project. We in park poor, densely-populated North Orange County are especially aggrieved for footing the bill for another district,” said Karen Lang-McNabb. “I’m all for having an improved harbor…but as a citizen I’m aghast.”

Supervisors pushed back, noting that while the harbor is located in the southern 5th District, it’s a county amenity the same way John Wayne Airport is located in central county but services the entire county.

“Basically the argument is that somehow if a supervisor, a non-5th District supervisor were to support this project, we’d be doing it to the detriment of our own constituents,” said Supervisor Todd Spitzer. “We need to get out of these district boxes…we make decisions as a region.”

At the same time, Spitzer and other board members said the harbor patrol costs need to be brought under control, while not offering a timeline for when they would take action.

“It’s incumbent on this board that we get a handle on the big bogie, which is harbor patrol,” Spitzer said. The revitalization deal, he added, “highlights the big hole that has nothing to do with this project.”

“In my opinion, park rangers would be better served to do the boating-related stuff,” said Supervisor Shawn Nelson of the Dana Point harbor patrol.

“With our current harbor patrol, they’re all trained at the homeland security level,” said Bartlett. “You don’t need a homeland security-level person necessarily telling someone to put their life vest on.”

Under the terms of the public-private partnership, the developer is entirely responsible for the construction, development and ongoing maintenance of the harbor. An estimated $717 million of the revenues generated by the project will also go into the county’s Dana Point Harbor fund, known as Fund 108, which is legally restricted to being spent at Dana Point Harbor.

Nelson said while the scale of the project and renovations is large, the financing plan generally reduces the county’s cost in the long-run because of the new lease payments from the developer, along with an estimated $414 million in reduced county costs from the developer taking on maintenance duties.

“Whatever chart is being read, the facts are this: We lessen our obligation to the parks budget by doing this – not increase it,” Nelson said.

Spitzer referred to a spreadsheet given to supervisors which, he said, found that in a “no-build scenario” where no renovations to the Harbor are completed, the county would spend $2 billion on the Harbor, rather than $1.2 billion with the revitalization deal, over the same 66-year period.

Voice of OC asked county staff Tuesday afternoon for a copy of the spreadsheet, but it wasn’t available as of the end of the day.

Discussions about the revitalization of Dana Point Harbor began in 1997, followed by the award of a contract in 2003 to Project Dimensions, Inc. to manage the project and administer contracts related to the revitalization. In the ensuing decade and a half, the county paid the company at least $13.7 million and extended the contract at least five times to develop design plans, secure permits from the city of Dana Point and California Coastal Commission, create an environmental impact report, conduct public outreach and perform other analyses.

In 2016, under the direction of Bartlett, the county solicited bids from companies to redevelop the Harbor under a public-private partnership. The board in October 2017 voted to select the winning bidders, a trio of companies organized under the name Dana Point Harbor Partners LLC.

Representatives of harbor business owners and boaters said they were excited to see the project get underway.

“I’m confident that we have good people on both sides of this agreement,” said Dan Streech, owner and president of a Dana Point Harbor-based boat-building company, Pacific Asian Enterprises.

“Furthermore, it’s been 20 freakin’ years,” Streech added. “We’ve got to get this thing done.”