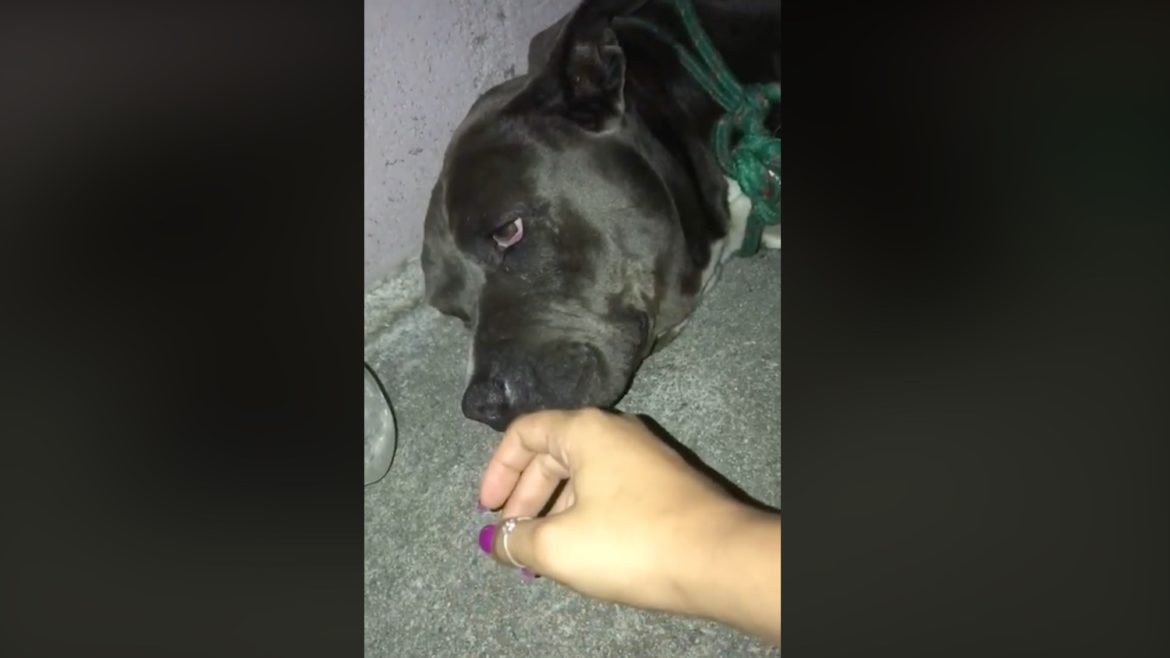 An injured pit bull, named "Valerie" and "Cargo," was abused, left on the sidewalk in South Los Angeles and died last week after being adopted at a low-cost OC adoption event. (Image from Ghetto Rescue Foundation video posted to Facebook)

Orange County supervisors, facing criticism over the sexual abuse and killing of a dog adopted last month from a free county program, took steps Tuesday toward creating a regional list of potential animal abusers to be shared across adoption programs and potentially setting up an animal cruelty task force.

“All of us just want to have that system and be proactive and prevent more abuses from happening,” Supervisor Lisa Bartlett told Voice of OC after Tuesday’s supervisors meeting.

Supervisors directed county staff to work with other local governments in the region on an information-sharing system about potential abusers, which Chairman Andrew Do called a “centralized Do Not Adopt list,” and to explore a task force. They did not set a date for next steps or define the areas of focus for a potential task force.

The discussion was prompted by the recent abuse and killing of a 5-year-old adopted pit bull, identified by two names: Cargo and Valerie. She died Aug. 7 from physical and sexual abuse after being found injured in South Los Angeles, according to the Los Angeles Police Department.

The dog was dumped in front of a house before she was found, Dianty Marquez of the Anaheim Hills-based Ghetto Rescue FFoundation told KTLA-TV.

The dog was adopted July 23 from Orange County’s shelter during a free adoption event, according to news reports.

During the event, OC Animal Care was waiving fees, with the exception of a $27 charge for rabies licensing, for animals that had been available for adoption longer than seven days. Orange County has been holding low-cost adoptions to find homes for animals in the overcrowded shelters, according to a statement from the county government’s OC Animal Care agency.

Animal advocates warned in 2016 that special screening procedures were crucial at free and low-cost adoption events to help protect animals from being adopted by abusers.

“Usually these types of people troll Craig’s list and newspapers looking for ads that say ‘Free to Good Home’. But when a shelter holds an event like Orange County has been holding, this is truly Christmas for these miscreants,” wrote Lake Forest Mayor Jim Gardner in a December 2016 opinion article published by Voice of OC, titled “Free Pet Events May Lead to Unspeakable Animal Abuse.”

“The Board of Supervisors and the County staff should immediately take steps to screen applicants who want to adopt animals, in general, and more specifically when they have these low cost events,” Gardner wrote.

As supervisors faced criticism for euthanasia at the then-full county animal shelter, they passed a fee waiver resolution in 2016 foregoing regular adoption costs when shelter capacity exceeds 80 percent. The fee waiver also applies when the shelter is expecting to see a sharp increase in numbers, such as during the Fourth of July holiday.

At the Board of Supervisors meeting Tuesday, Supervisor Todd Spitzer received support from his colleagues in directing county staff to collaborate with other counties on the information-sharing system about potential abusers.

Do, the chairman, said the idea is for “all jurisdictions, across counties” to have access to that list.

Kelly Reeves, co-founder of Paw Prints in the Sand Animal Rescue, told supervisors Tuesday the most recent incident was an example of the dangers of giving away animals for free or at low cost.

“Animals are considered property,” Reeves said during public comments. “Animals don’t have a voice, but we do.”

Do, the supervisors’ chairman, was scheduled Tuesday to award a county resolution to the TV stations for their support of the event, but the item was deleted from the agenda without explanation.

During their discussion Tuesday, the supervisors did not say what kind of screening was in place or ask staff about it, other than suggesting they should create a centralized regional list of potential abusers.

“Dogs shouldn’t be given away for free or cheap to anyone who fills out an application and presents their driver’s license. No due diligence is done in the form of background checks or home checks during these events,” Reeves said during public comments.

In response to questions after the meeting, county officials said they currently conduct screenings of adopters and will continue to do so.

“OC Animal Care will continue to screen potential adopters using information from our own animal control investigations as well as other law enforcement agencies to determine if those looking to adopt are suspected of or have been convicted of animal offenses – in which case they cannot adopt,” said a statement from OC Animal Care, via county spokeswoman Molly Nichelson.

“We will also continue to log information about adopters (including ID, address and phone number) into our computer system as an additional safety measure.”

The current screening of people looking to adopt uses “information from our own animal control investigations as well as other law enforcement agencies who have worked with [OC Animal Care] on these investigations to determine if those looking to adopt are suspected of or have been convicted of animal offenses,” Nichelson wrote Tuesday in response to questions from Voice of OC. “If a potential adopter is the subject of an OC animal control investigation and is suspected of or has been convicted of animal offenses they cannot adopt.”

Asked if the screening process was limited to offenses in Orange County, or is statewide or nationwide, Nichelson wrote “Currently, the information screened is limited to investigations within OC Animal Care’s own jurisdiction (14 contract cities and county unincorporated areas) and cases which have been referred to us by other law enforcement agencies.“

“OC Animal Care staff and volunteers care deeply about animals in our care, and we are committed to finding permanent, loving homes for each animal,” the county statement added.

“While we never excuse or condone a single case of animal cruelty, it’s our experience that people who adopt from our shelter are looking for a new family member and the animals continue to be well cared for after adoption.”

People posted dozens of critical comments toward OC Animal Care regarding the dead pit bull on the Saturday event’s Facebook page, many of whom called for it to be canceled.

The exploration of an animal cruelty task force was not initially included in the supervisors’ direction to staff.

Later in the meeting, during general public comments, animal advocate and Laguna Woods resident Rose Tingle, who founded the group Citizens for Animal Shelter, Orange County, brought up the fact that the Los Angeles Police Department has such a task force, and that Orange County has three-quarters as many people as the city of LA.

A few minutes later, Spitzer acknowledged Tingle’s remarks and asked staff to explore the creation of a task force.

Tingle said after the meeting that “for years” she’s requested the county create a citizens’ advisory committee to involve community members in county animal shelter policies, but that it has yet to happen.

“Even one Valerie or Cargo is a price too high to pay for a clear-the-shelter event,” said animal advocate Sharon Logan.