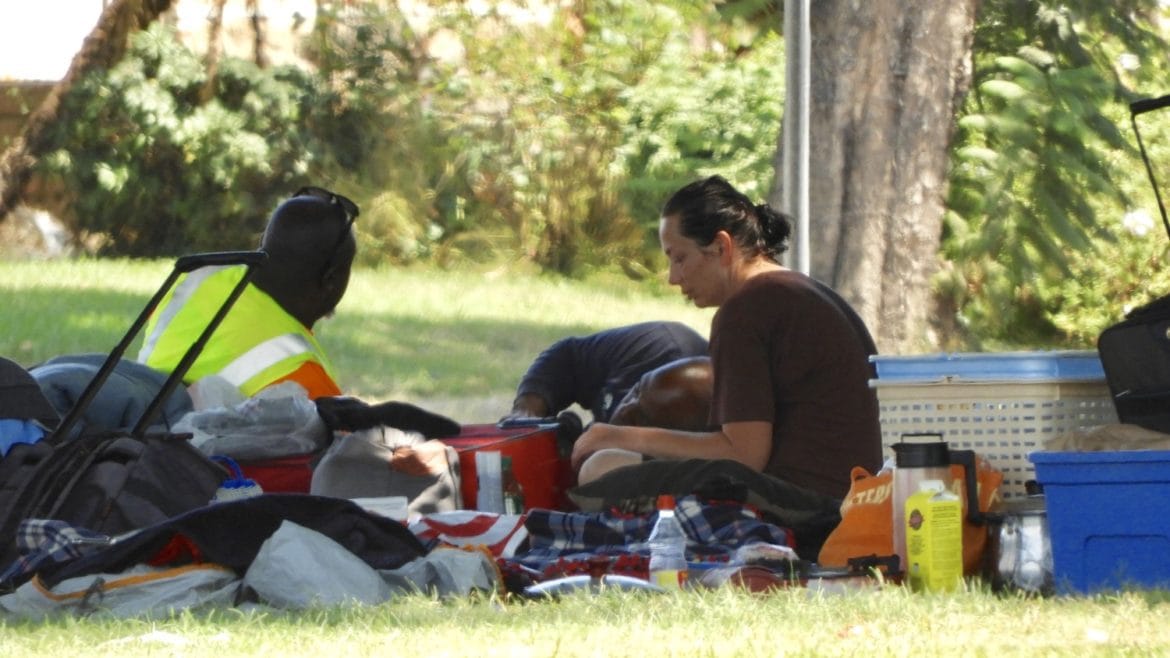 People at Maxwell Park in Anaheim on Friday, Aug. 3, 2018, where dozens of homeless people moved after the Santa Ana riverbed closure

U.S. District Court Judge David O. Carter warned the County of Orange and its cities they will need to make significant progress on plans for new emergency shelter housing for the homeless, or face a possible court ruling or temporary injunction stopping the enforcement of anti-camping laws.

Carter told attorneys and public officials in his courtroom Friday he wants to see action to get people housed quickly, especially after the closure of two National Guard armories in mid-July that each housed up to 200 people.

“My breaking point were those armories – I’ve got three to 400 people seeking shelter sleeping in people’s backyards and parks,” Carter said. “This idea people aren’t seeking shelter is nonsense.”

Carter set a hearing for September 7 and said he wants to see a “resolution” or else he will consider issuing an order. He also invited attorneys for the homeless to file their own request for an injunction, and threatened to impose more restrictive requirements on the county and cities if they fail to come up with their own solutions.

“The last thing I want to do is come down with a TRO [temporary restraining order] – but unless I see progress, I’m now inviting counsel to bring it,” said Carter, looking at attorneys for the homeless. “Put up or shut up.”

Although Carter did not give specific goals, he outlined figures for the number of new shelter beds he expects in each of three geographic regions of the county, and pressed for the finalizing of a deal between Santa Ana and the county for a 700-bed shelter, which would replace the current 400-bed Courtyard Transitional Center and add another 300 beds.

Overall, Carter and the county agree they need at least 1,550 new shelter beds, 60 percent of the estimated 2,584 unsheltered homeless people countywide, according to a 2017 count.

Specifically, he called for at least 450 new beds in North Orange County, 300 beds in Central Orange County and another 300 in South Orange County. It’s unclear where the remaining 500 beds would come from, although Carter noted at least 500 new housing units for the homeless are expected to be built by the end of the year.

Friday’s hearing was held because Carol Sobel and Brooke Weitzman, attorneys for the homeless, filed an amended complaint July 26 renewing a request for a court order banning the cities of Anaheim, Orange and Costa Mesa from enforcing anti-camping laws against homeless people until there are adequate shelter beds for them.

Carter said for months he has been asking the county and attorneys for specific numbers of beds needed to accommodate the county’s unsheltered homeless. He received estimates from a document circulated by the county on July 3.

“If you can’t give me numbers today, then I’m going to give you numbers I can live by,” said Carter, directing his comments to county officials. “From your side, if I hear one more time that you don’t have any money, I’m going to put up some very embarrassing figures. I’ll put up initial figures that show you have all the money you need.”

Sobel argued that the requirement for new beds in the north part of the county should be increased, pointing to a survey which found 906 homeless people in Anaheim alone, 797 who are unsheltered.

“The numbers in the Point-in-Time count are pre-riverbed dispersement [sic] – we have a lot of people who went into Anaheim,” Sobel said. “For us the number might be closer to 600 or 650 [beds].”

At a June 13 hearing, Anaheim officials announced plans for a 75-bed shelter and a 200-bed shelter that will apparently be financed by private donors.

Another site with 100 to 125 beds is also being discussed by a coalition of 11 North Orange County city managers, according to Orange City Manager Rick Otto.

“The cities have agreed to share a proportional cost for the purchase and development of that site in conjunction with the County of Orange,” Otto told Carter, adding no discussion has been had yet about sharing operating costs.

Carter also questioned Santa Ana city and county officials over why the boards for both entities have yet to approve a partnership agreement for the construction, financing and operations of the new shelter.

Santa Ana and county officials exchanged drafts of the agreement Thursday, but talks appeared to slow down over the use of “two controversial, potentially politically sensitive words” in the agreement, although county counsel Leon Page said those words could be easily removed. Page did not disclose the words.

Carter spoke extensively about his belief that the Fairview Developmental Center — a state-owned facility in Costa Mesa with dormitories and medical facilities that is slated to close — could easily accommodate most of the county’s homeless, permanently or temporarily until other facilities are built. Carter said he considered holding Friday’s hearing at the Fairview Center.

“Can you call the governor for me?” Carter asked Costa Mesa City Manager Thomas Hatch. “Would you tell him you met with the city council and we just want four [dormitories]?”

The Costa Mesa City Council voted unanimously in March to oppose turning Fairview into a mental health facility for the homeless, although Hatch emphasized repeatedly Friday that the council is willing to “do its fair share,” they just don’t want to take on the entire county’s homeless population.

Hatch noted under the city’s general plan, 25 percent of the property is set-aside for institutional uses, such as a hospital or medical facility. Pressed by Carter, Hatch eventually said the city believes using four dormitories from the current facility for homeless housing is feasible.

Only one official from South Orange County was present at Friday’s hearing, Laguna Niguel City Manager Kristine Ridge. Except for the four cities directly involved in the litigation, other cities were not invited or asked to come.

Ridge told the judge South Orange County cities are happy to collaborate but disagree with the 300-bed estimate suggested by the county, noting that their region has 286 homeless people based on county estimates.

Carter urged cities to add enough beds to accommodate the ebb and flow of homeless people throughout the region.

“Watch out because if you just build it [shelter] for 50 what happens when the population shifts and we really need 75?” Carter asked. “Maybe just build out 50 beds at the present time but give room to build.”

While Carter has not taken any public actions in the weeks since the June 13 hearings, he said Friday he has been busy meeting with public officials, visiting shelter facilities and touring city parks.

After the closure of the armories, Carter said he and a law clerk drove to a number of shelters and found few or no open beds at any of them.

He also toured parks in Anaheim with Acting Police Chief Julian Harvey, later returning on his own in the early morning hours, he said.

“Our parks are a complete mess. There are folks who came out of armories who wanted shelter – these aren’t the folks who are resisting,” said Carter. “In the initial intake [at the Riverbed], I was surprised by how low the criminal element was from what I expected to be.”

Carter visited Maxwell Park, the city’s “most impacted” park in terms of homelessness, according to a city staff report.

A Voice of OC reporter was taking photographs of Maxwell Park Friday afternoon when he was confronted by a police officer for taking photos of the officer while he detained a homeless man and two other people.

Carter played a brief video clip of interviews he conducted in public parks with homeless people who told him they would stay at a shelter if there were beds available. Several of the people he spoke to were sleeping in parks after staying at the armories, Carter said.

Carter said although officials have told him they were in contact with Gov. Jerry Brown, Carter spoke with the governor’s staff recently and was told neither the county nor cities of Santa Ana and Fullerton had submitted a request to keep the armories open beyond July.

He urged the parties to reach a settlement rather than delve deeper into litigation and spend more taxpayer money, and said issuing a formal ruling would impose specific requirements that would require a lengthy and inflexible monitoring process by the court.

“It’’ll take six months to a year, billing costs will go sky high, there will be a winner or loser with no projects built, nothing gets accomplished,” Carter said.

The judge said he wants to see major progress before September, when most schools are open again.

If the parties reach a settlement, Carter suggested a scenario where a panel of magistrates would rule on the details of individual cases — for example, disputes over whether a couple can be housed together – and he would be available on short notice for appeals.

Carter warned attorneys that he plans to outlive this litigation.

“I’m 74 years old and I feel very good. I’m not going to die regardless of some of you thinking I might like to,” Carter said. “I believe in this cause so much that my family has had a discussion if I’m going to hang in there for another three years…if we don’t reach a resolution we’re going to take action faster than you can imagine.”