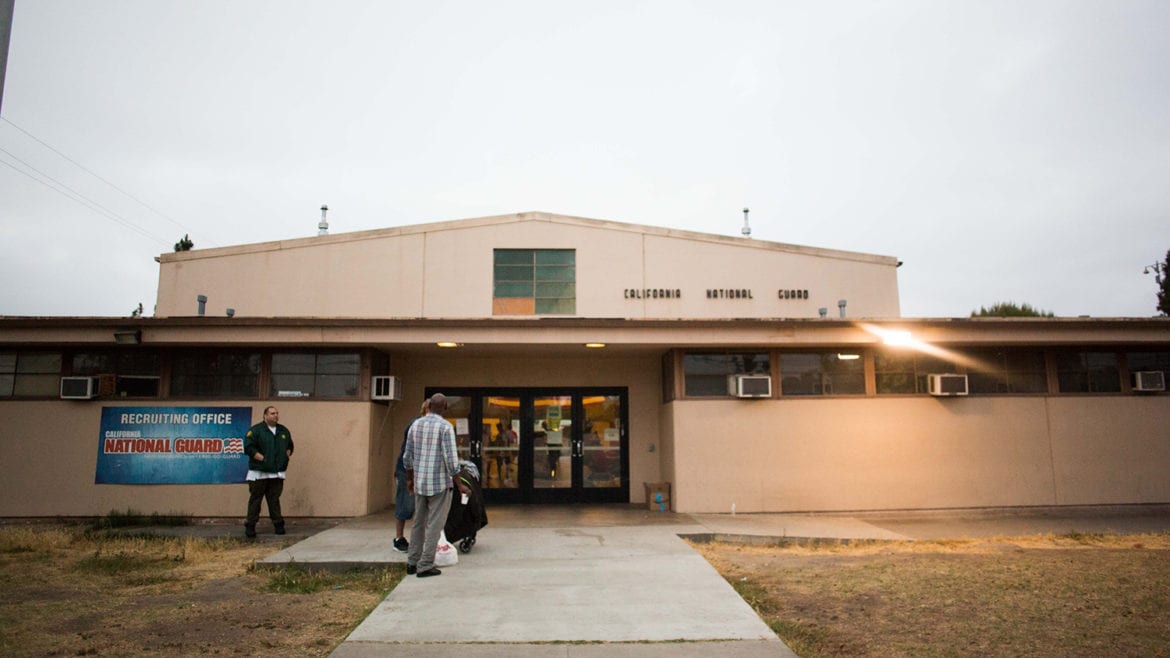 The Santa Ana National Guard armory overnight homeless shelter on July 15, 2018, when it closed its doors for the season.

Homeless people in north Orange County no longer will have nightly shelters at the National Guard armories after the Santa Ana armory closed its doors Sunday morning and Fullerton shut down last week.

Most people before dawn Sunday morning walked or rode bikes into the surrounding Santa Ana neighborhoods as they planned their next move. Many said they’re not sure what to do next.

“Where you think they’re gonna go?” asked Gerald Broussard, a homeless man. “They’re gonna go to the parks, the neighborhoods, the schools and the people aren’t going to want them there — I don’t blame them.”

Broussard, 56-years-old from Los Angeles, said he’s been staying at the Santa Ana armory on Warner Avenue next to Delhi Park for a couple of months. He lost his apartment in LA shortly after losing his job last year and came to Orange County because he had a job lined up, but it didn’t pan out, he said.

The county is offering the Courtyard shelter in Santa Ana, near the Civic Center, to people leaving the armories, but it doesn’t have enough space for everyone.

County spokeswoman Molly Nichelson said, in a Friday phone interview, the only shelter people can walk into without reservations or background checks is the Courtyard in Santa Ana, a little over a block from the Civic Center.

Nichelson said there were 43 beds available at the Courtyard shelter Thursday night. Using data provided by the county, July’s average for both the Fullerton and Santa Ana armory shelters is 200.

While Broussard said he’s got a job lined up in LA and will be moving back, he said many of the people at the armory have nowhere to go after it closed Sunday.

“I’m just kind of learning how to deal with it,” said Orange County native Tim Smith. “We have no voice and it gets hard.”

Smith said he had a house in Midway City until a fire left him homeless. He said he’s battling diabetes and the disease causes neuropathy in his feet and prevents him from standing more than 10 minutes. The 55-year-old Smith said he’s fighting to get Social Security.

When Smith was being interviewed at approximately 6:30 a.m. Sunday, a woman leaving with her backpack said to her friend as they started to walk west on Warner Avenue, “I gotta figure out where the fuck I’m sleeping tonight — like everybody else.”

Meanwhile, Smith said he’ll be avoiding parks and other public areas as best he can because of the police.

“I’d like to know how we became not American citizens,” Smith said. “It’s like we can’t be anywhere without the cops showing up … they (police) try to make you flip, but you can’t.”

Smith, Broussard and the security guard working the front door said the armory was nearly full Saturday night. The armory can shelter up to 200 people a night.

A bus pulled into the armory parking lot shortly after 5 a.m. and left at 5:18 a.m. The driver said he was taking the passengers to the Santa Ana Civic Center, roughly a block away from the Courtyard shelter. Santa Ana, working with the county, cleared out the Civic Center homeless camp in April.

Many people came out of the armory carrying suitcases, bags, backpacks or duffel bags to wait for the bus, only to find out it already took off, which angered a few people.

Broussard and other homeless people said the bus was early on Sunday and the normal time for the bus is 5:30 a.m.

The nightly average number of people staying at the armory was 101 in June and 113 in July.

The county is scrambling to find more shelter space after it cleared the roughly 800 homeless people out of the Santa Ana riverbed beginning Jan. 22. The clear out led to a federal lawsuit a week later against the county, Anaheim, Orange and Costa Mesa.

Assemblywoman Sharon Quirk-Silva (D-Fullerton) was able to get Gov. Jerry Brown to authorize 90-day extensions for the armory shelters amidst the county’s scramble to find more shelter beds. They normally are open only during the winter and were scheduled to close April 15. 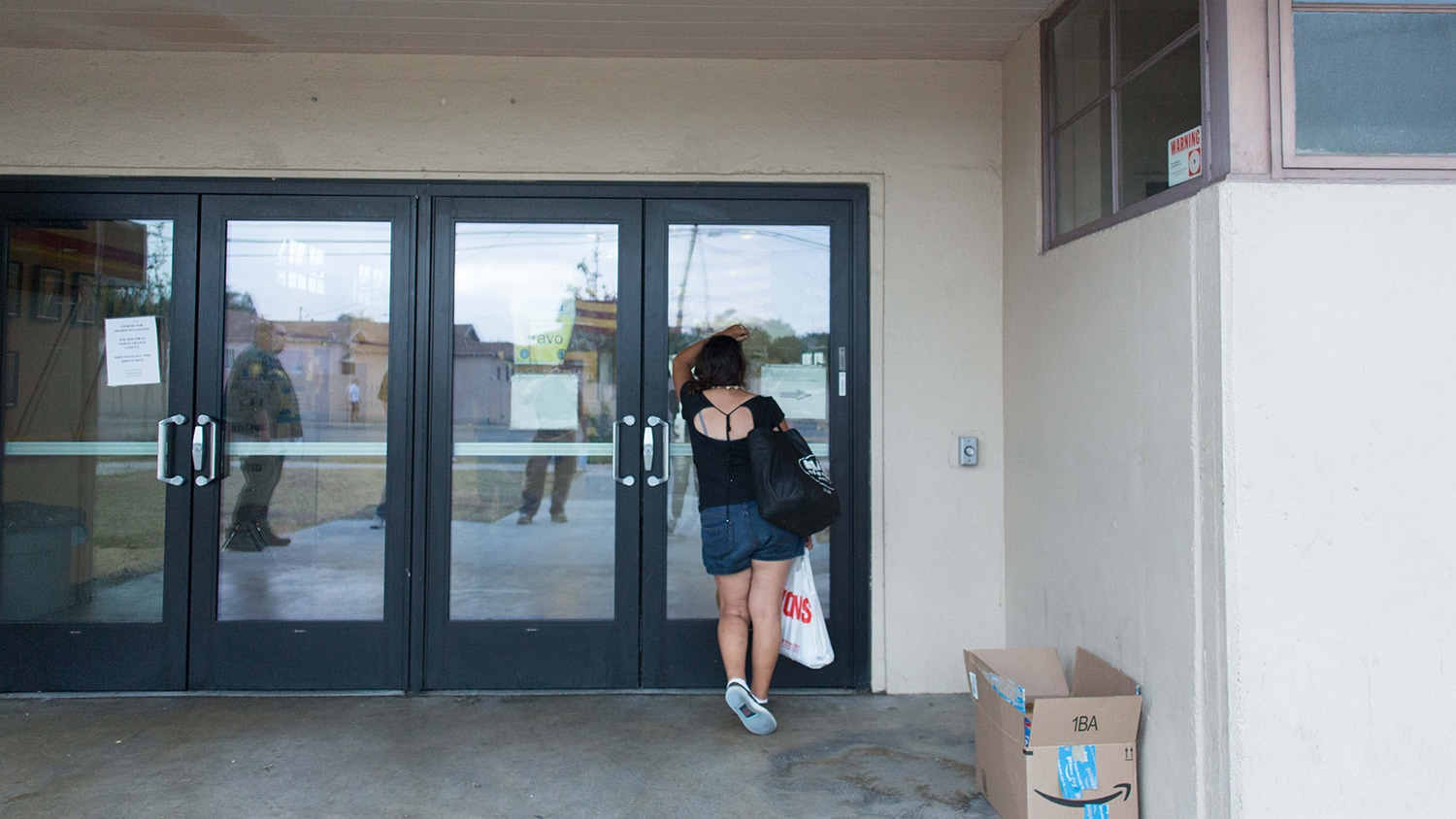 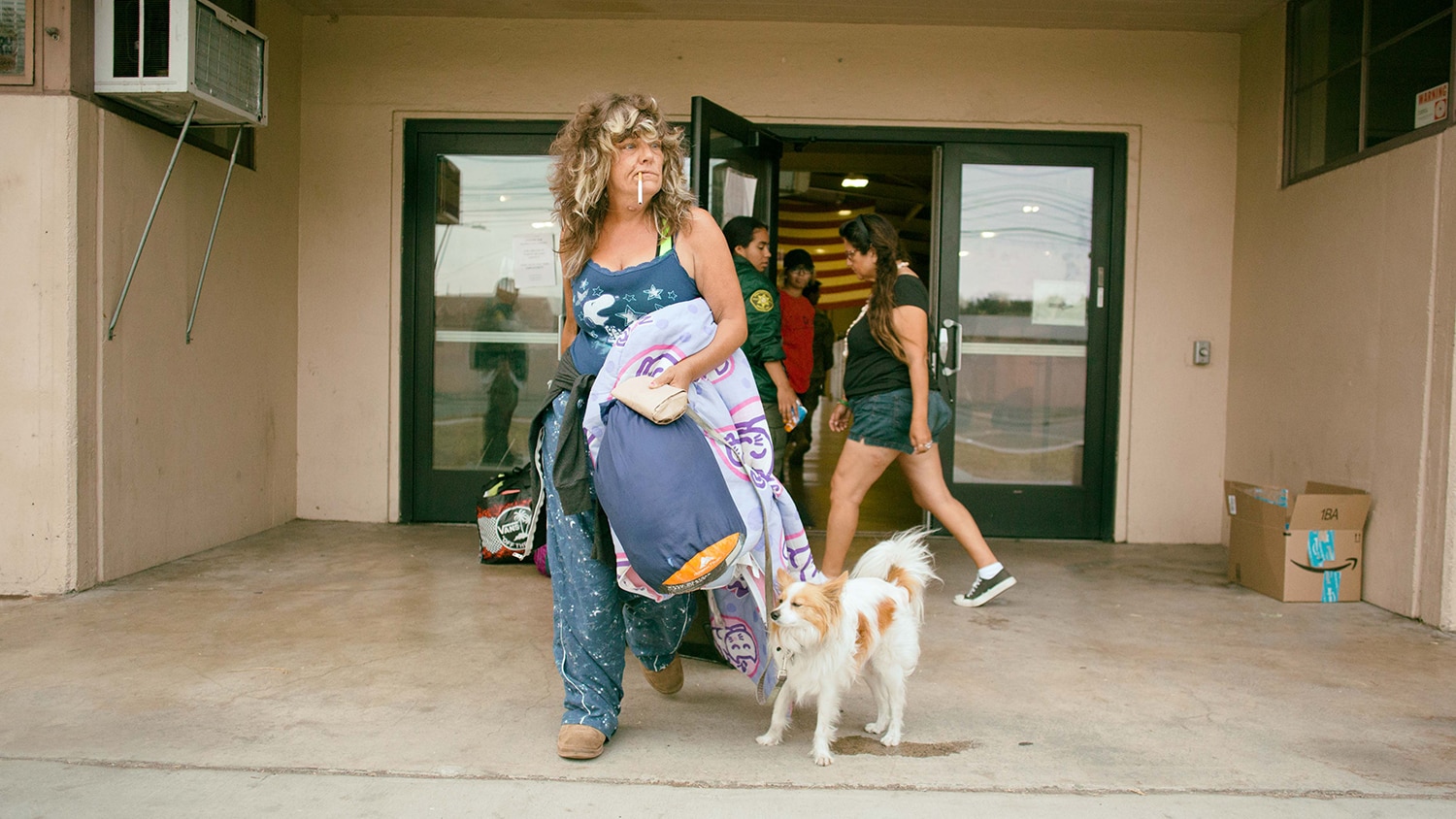 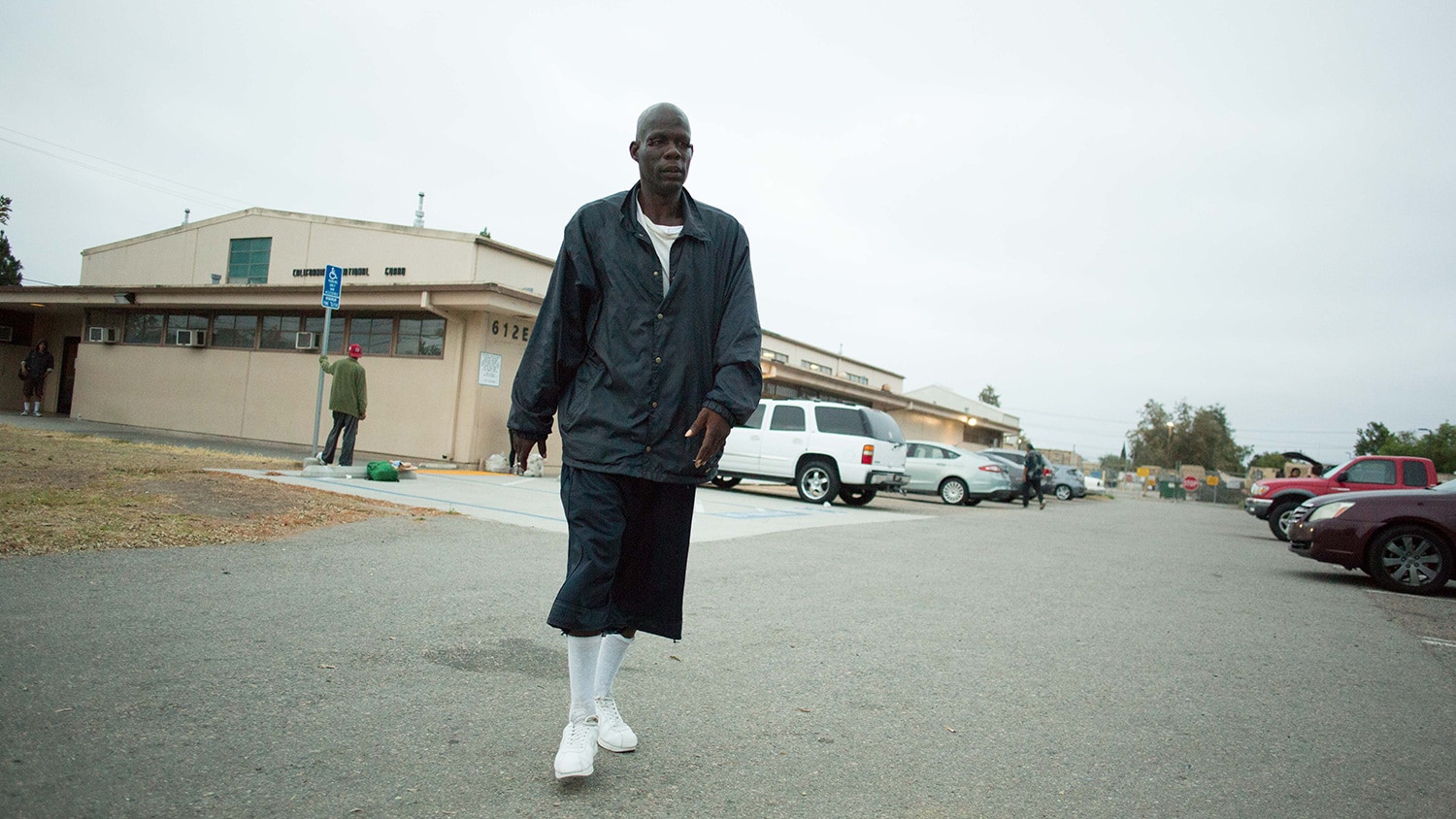 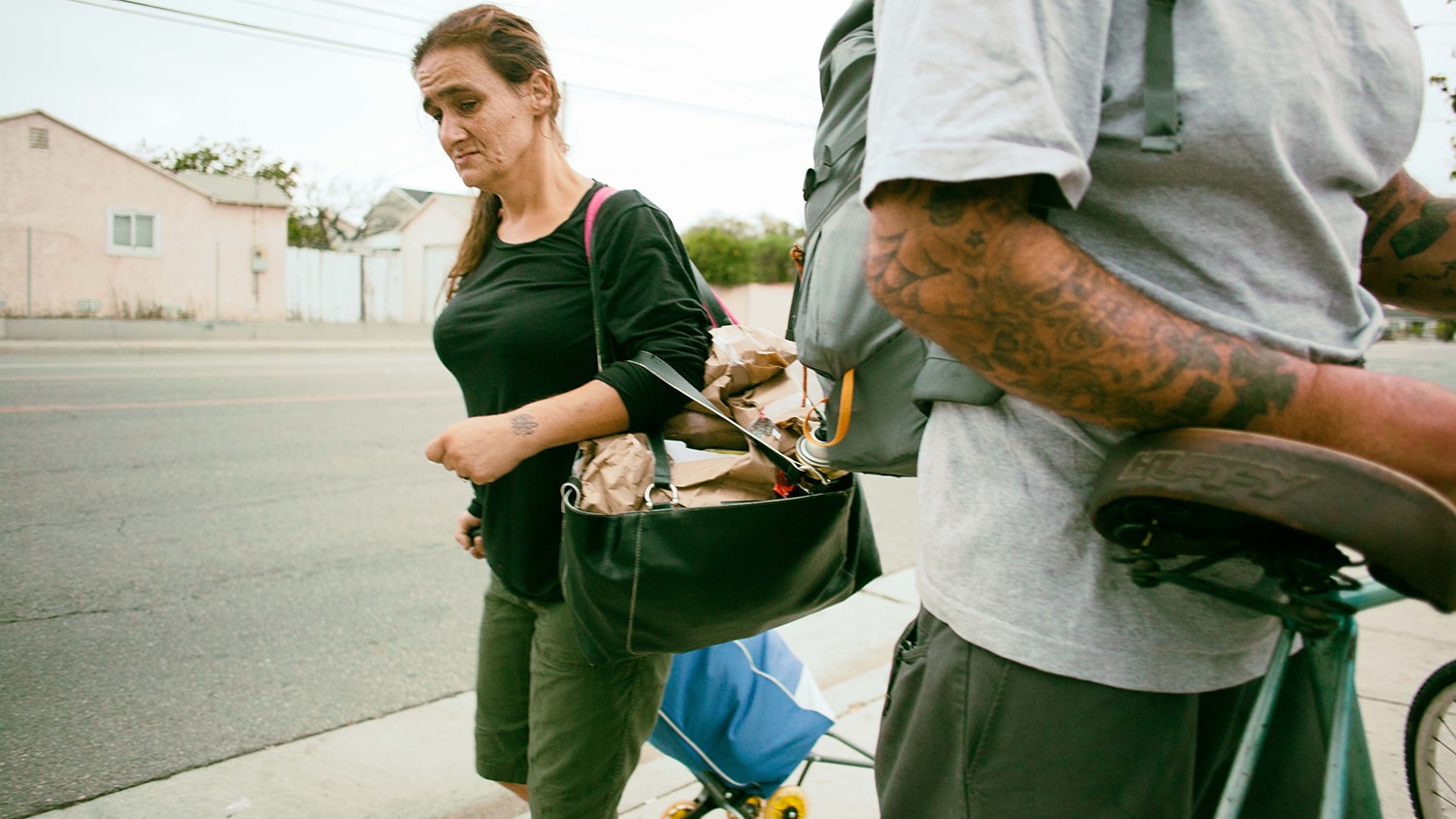 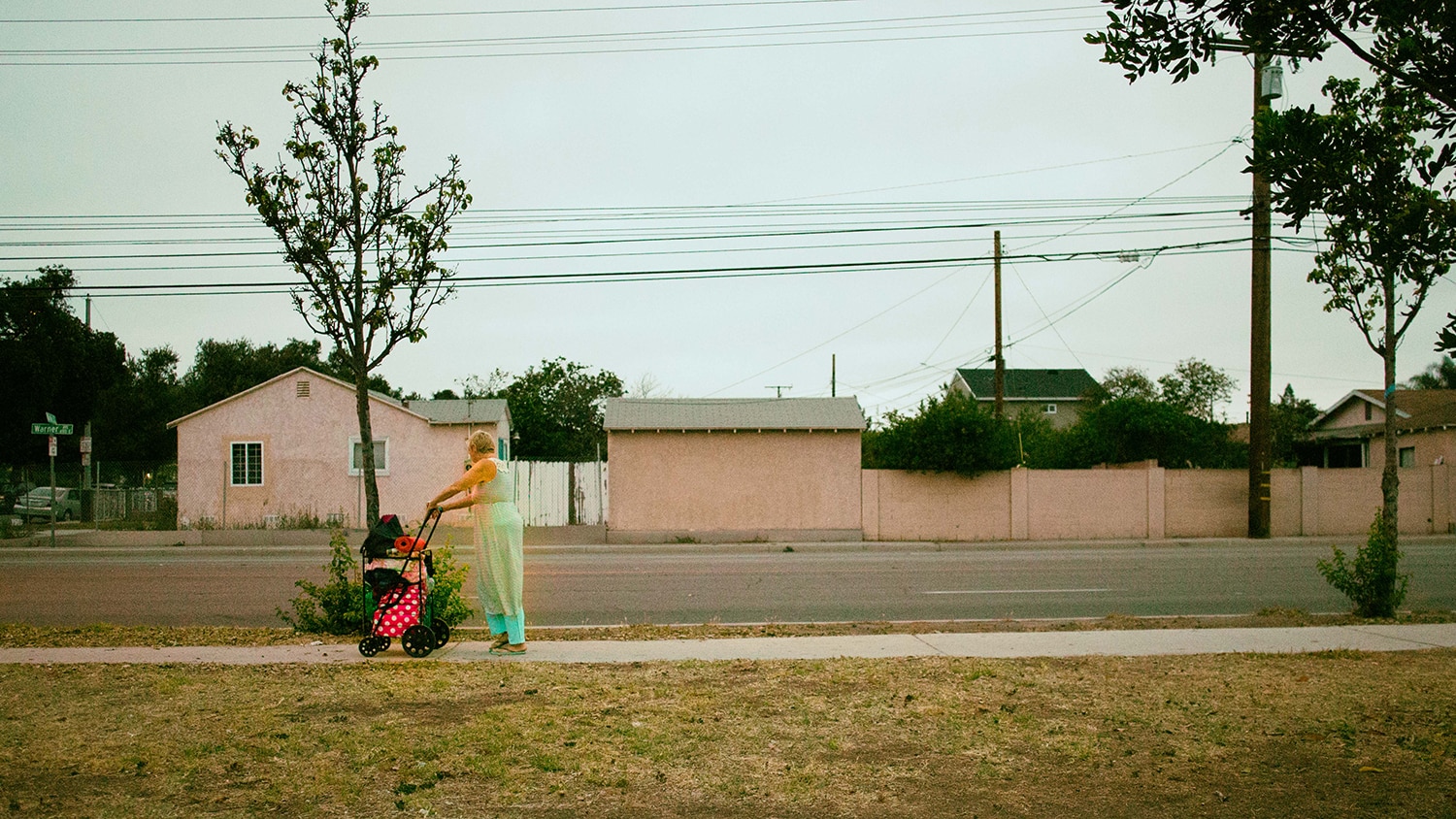 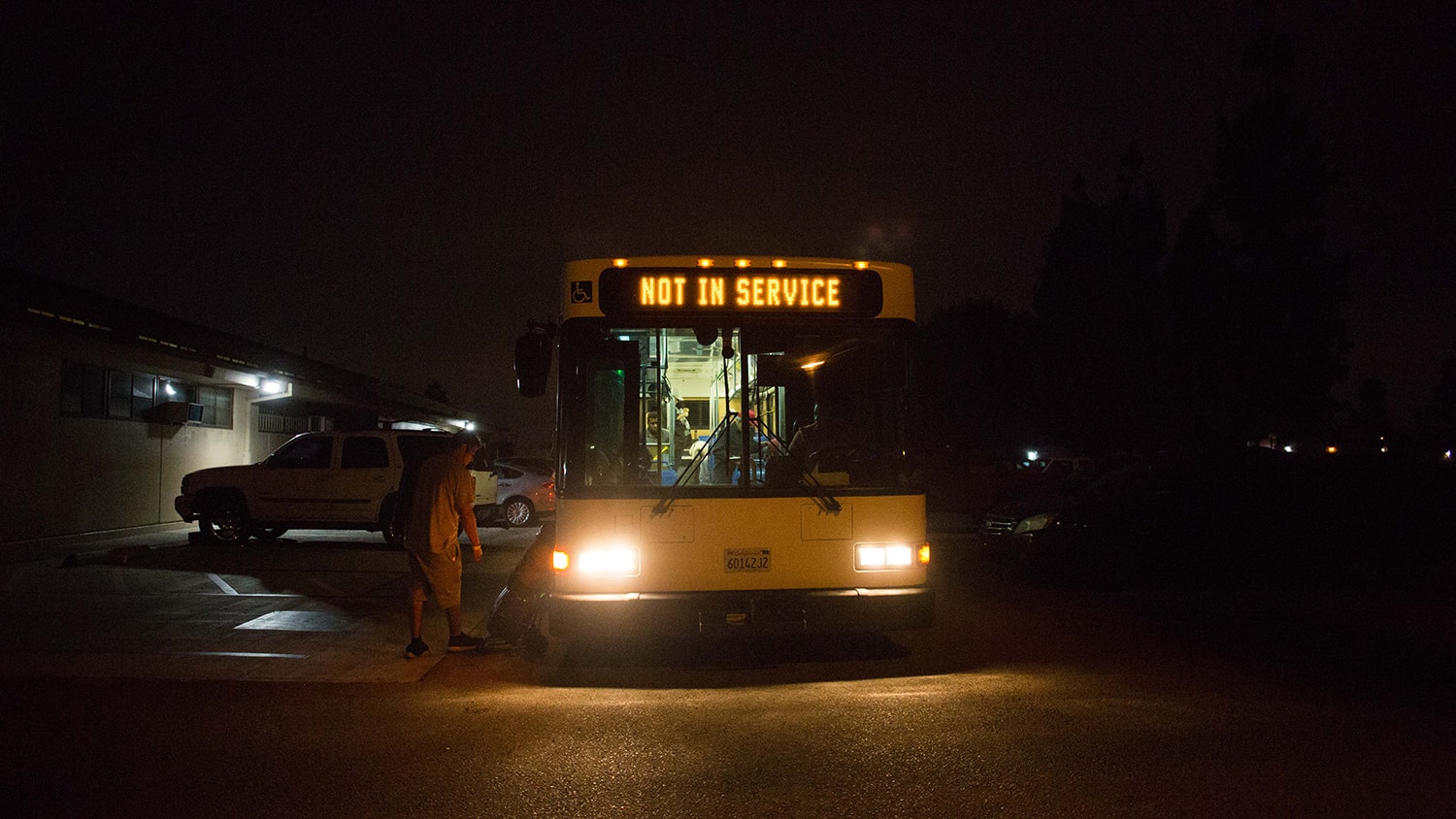 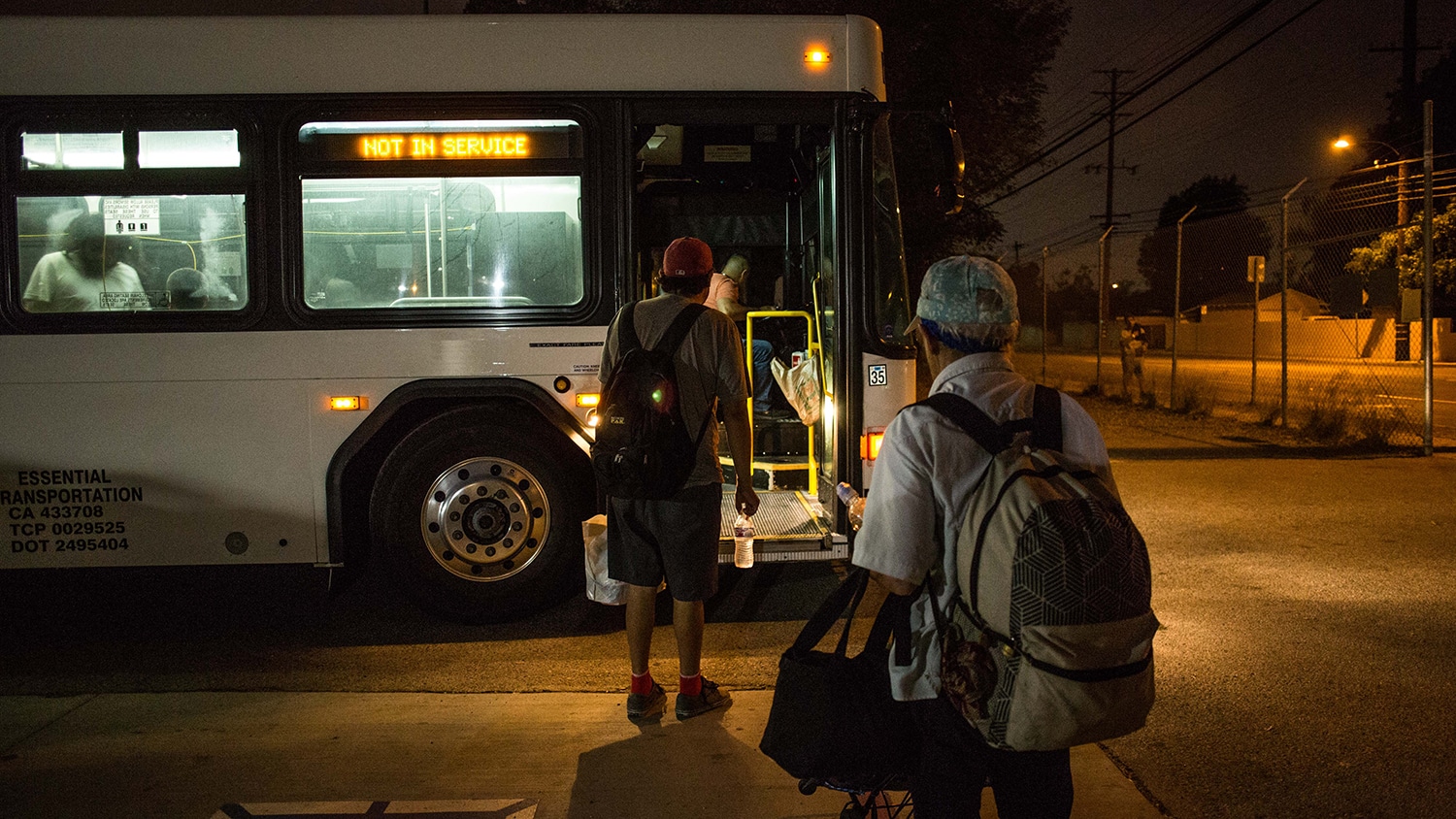 The lawsuit, filed by attorneys Brooke Weitzman and Carol Sobel on behalf of the homeless people, claimed the people will have nowhere to go and cities all over Orange County would enforce anti-camping and loitering laws which leads to “criminalization” of homelessness.

Many people living on the riverbed said they had nowhere to go when they were being evicted. Many expected to be ticketed and potentially serve time in county jail for failure to pay their anti-camping and loitering tickets.

The county ramped up its enforcement efforts Feb. 1 when officers from the probation and parole departments accompanied sheriff’s deputies when they went tent-to-tent and checked names for warrants and probation/parole violations.

Federal Judge David. O Carter halted the evictions Feb. 6 when he ordered the county, Orange, Costa Mesa and Anaheim to stop enforcing anti-camping and loitering ordinances on the riverbed.

While the temporary restraining order was in effect, the 74-year-old Carter walked the roughly three-mile stretch of homeless encampments on the riverbed while he spoke with homeless people, attorneys from both sides and county staff to gain firsthand information. Carter, a Vietnam War combat Marine, assured many homeless people that he and the county were going to figure out a plan to fix the shelter shortage.

Carter lifted the order Feb. 20, after the county and Weitzman and Sobel came to an agreement in court which provided nearly 400 hotel and motel rooms for homeless people. The riverbed evictions ended Feb. 26.

One of Carter’s law clerks was at the Santa Ana armory Sunday morning to observe the homeless people leaving on the last day.

Earlier, the roughly 200 people living at the Santa Ana Civic Center’s Plaza of Flags and surrounding area were also cleared out as part of a court agreement after the urging of Carter. They were put in nearby shelters like Bridges and Kraemer Place in Anaheim and the Courtyard — an old OCTA bus terminal — a block away in Santa Ana.

Smith was critical of the staff and environment at the Courtyard shelter.

“They look through your stuff, take what they want and they even take the blankets back — that’s just kinda bullshit,” Smith said. “That place is so hinky, it’s unreal.”

After roughly 2,000 people — mostly from Irvine — descended on the courtyard outside of the Hall of Administration to protest the proposed homeless shelters, county supervisors voted to kill the plan March 27.

“It’s just a pain in the ass to get some help,” Smith said, noting public pushback. “Nobody wants to deal with us.”

Although there were no plans or any specifics about a shelter, hundreds of Costa Mesa residents showed up to protest the idea at a special City Council meeting March 28. The Council adopted a resolution denouncing the plans.

Broussard said there’s too many misconceptions about homeless people and it makes it harder for the homeless to get back on their feet.

“People think because you homeless, everybody done the wrong thing to become homeless, but it’s not always like that,” Broussard said.

After the hotel stays ended mid-March for the riverbed homeless people, many said they again didn’t know where to go.

While there’s been a push — both on the private and public fronts — to build more affordable housing around the county to prevent poor people from falling into homelessness, there’s still a shortage of homeless shelters.

The OC Grand Jury also told the county and cities to stop fighting and band together and form a regional body to help build more affordable housing.

“Discussions are still ongoing with relation to permanent shelter sites and temporary shelter sites, but we don’t necessarily have anything to report at this time,” Nichelson said.

Justin, an Anaheim native who didn’t want to give his last name, said he lost his job over three months ago and has been on the streets since. He plans to go to the Hospitality House run by the Salvation Army in Santa Ana so he can get ready for an upcoming job.

“I’m going to go to hospitality house tomorrow and see if I can get in there. From there, I got work starting in August — thank god. That’s all it really takes is to get a job: a place to lay your head and take a shower. You gotta have a place to shower in order to get work — one has to come before the other,” Justin said.

Broussard said homelessness is growing in Southern California and nobody seems willing to deal with it.

“The homeless is a really big problem and nobody wants to deal with it. They just put a Band-Aid on it,” he said.

Smith said the county and cities aren’t spending the state and federal money received to combat homelessness on homeless people.

“The funny thing is that they got all this money, but we at the bottom don’t see it,” Smith said. “Somebody’s got this money somewhere, but it sure as hell ain’t us.”

Spencer Custodio is a Voice of OC reporter who covers south Orange County and Fullerton. You can reach him at [email protected]. Follow on Twitter @SpencerCustodio