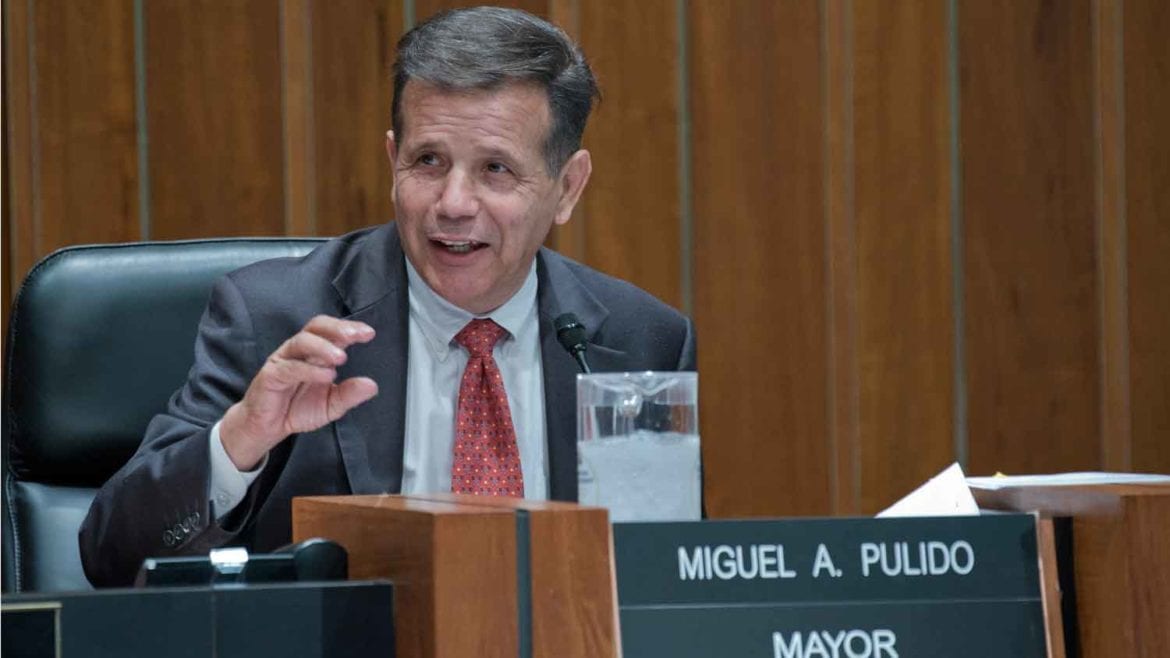 Santa Ana should try to “harass” and “get tougher with” homeless people through law enforcement, which would push some to “move out of town and go harass another town,” Mayor Miguel Pulido said Tuesday.

“I believe we’re about to come up with a settlement,” Pulido said during the City Council’s regularly-scheduled meeting, referring to an ongoing federal civil rights lawsuit regarding homelessness.

“What I’m suggesting is that, maybe through the city attorney, the minute we have a settlement, we can have some type of an interim agreement with the court, so we can start enforcing our [anti-camping] laws again,” Pulido said.

Pulido said the enforcement could be done once the city has a plan for additional shelter beds, but before the beds are actually available, if the court agrees to it.

“Some [homeless people], the minute we start to harass them and get tougher with them, are gonna move out of town and go harass another town. And that would not be a terrible thing. So let’s try to figure out…what we can do,” Pulido said. He directed his comments at a deputy police chief, the city attorney, and the city manager.

Pulido said some homeless people are “flat-out criminals” and “mean, mean people” who are “terrorizing our community.”

Under federal court precedent, cities can face legal liability if they enforce laws against homeless people for sleeping in public when there is a shortage of adequate shelter beds that provide an alternative to sleeping on the street.

U.S. District Judge David O. Carter, who is presiding over the civil rights lawsuit about homelessness in Orange County, has warned cities that the existing shelter system is already overcrowded and that officials must create additional shelter space if they want to be able to legally enforce anti-camping and loitering laws.

Carter has suggested he would let cities settle out of the lawsuit if they make serious, enforceable commitments to create a significant number of new shelter beds. And he has said anti-camping laws could be an effective tool to incentivize homeless people to get into shelter – if shelter is actually available.

At the same time, he has warned cities against pushing homeless people to other areas – such as Santa Ana – saying it raises constitutional issues.

“I don’t want people pushed into [your city],” Carter told Costa Mesa city officials at his most recent court hearing on August 3.

Carter has emphasized that Santa Ana has stepped up more than any other city in hosting shelters. And with other areas of the county not doing the same, Carter has said, Santa Ana has been “inundated” with homeless people transported, pushed, and drawn there from across the county.

In his comments at the end of the City Council meeting, Pulido said he believed Santa Ana was about to settle, and said the city should seek court permission to enforce its anti-camping laws against homeless people before additional shelter beds are available.

“The minute we put together a [shelter] plan – I know we’re not going to be able to implement it right away. Even if you’re trying to get a building, you’re trying to get [in] cots, you’re trying to do stuff. But what I’m driving at, is that the judge has said once we’ve have a plan, and we’re exempt from the lawsuit, that we can begin to enforce the [anti-camping] law,” Pulido said.

“And what I’m talking about is that some of these homeless are flat-out criminals. I mean – you know, some might be down on their luck, and they’re trying to find a job. But others are just, you know, mean, mean people that are…terrorizing our community. They’re coming into our homes, they’re coming in our businesses, they’re stealing things. And they know we can’t do anything, because we’ve got this lawsuit over our head,” he said.

“It’s very frustrating for all of us up here…to be in this position and this situation where we…really can’t help ourselves,” he added.

However, Santa Ana’s top lawyer said the lawsuit does not stop the city from enforcing its laws.

“I would just like to clarify, for the record, that we have been continuing to enforce our regulations, because we aren’t enjoined,” City Attorney Sonia Carvalho said shortly after Pulido’s remarks. Pulido didn’t dispute her statement.

Santa Ana can, and does, conduct enforcement if a shelter bed is available and a homeless person declines to accept it, she said.

“What the real trick there – what’s really been the biggest challenge is, the law says that before we can take someone into custody, we have to give them the option of going to a shelter, or having a bed. And that’s been the trick, is it’s building those shelter spaces, so that our police officers…they call all the available places to see if there’s a bed. And if an individual does not take that bed, and refuses to, then we are [enforcing],” Carvalho told the council.

Asked about Pulido’s comments, and the idea of Santa Ana pushing homeless people to other areas, a spokesman for the nearby city of Anaheim said it will take regional cooperation to address homelessness.

“I think we’ve all seen that we’re all gonna need to work together in this. And really shifting issues from one place to another – we know that’s not a real long-term answer to homelessness,” said Anaheim spokesman Mike Lyster.

Anaheim officials “commend” Santa Ana, which bears “an incredible burden” on homelessness for the county, Lyster added. “We understand their frustration.”

“Honestly, Santa Ana’s been a great partner with us as well, in terms of addressing this – they’ve been one of the most active, progressive, along with ourselves” and Fullerton, to take steps to address homelessness.

Mayor Don Wagner of Irvine, which borders Santa Ana, declined to respond to Pulido’s remarks, saying he respects Pulido and didn’t hear his comments or their tone.

“I have great respect for Miguel and his efforts to deal with this problem,” Wagner said. “We have our ordinances, and we are going to continue our efforts – with him, with the court, with anybody interested in solving this problem.”

A spokesman for Costa Mesa, which also borders Santa Ana, declined to comment.

One of the lead attorneys for homeless people in the civil rights suit said Santa Ana can enforce criminal laws but cannot criminalize homelessness if people don’t have realistic alternatives.

“They can certainly enforce laws for criminal behavior,” said attorney Brooke Weitzman, in a text message regarding Pulido’s comments. But, she wrote, “there will not be any settlement that permits the criminalization of homelessness,”

“Enforcement of anti-poverty laws without adequate alternatives continues to violate the constitution and is certainly a factor in whether we will be able to reach any settlement.”

Over the past couple of years, homelessness has emerged as among top issues the public cares about in Orange County, with the issue becoming ever more visible amid a shortage of shelters and growing numbers of homeless people on the streets and along waterways and railroad tracks.

Residents and businesses in Santa Ana and elsewhere in the county have complained about harassment and crime associated with the growing homeless population.

Carter’s offer to potentially lift Santa Ana from the lawsuit centers on the city’s proposed 700-bed shelter, which officials have said would be in an industrial part of the city and could replace the existing 400-bed Courtyard shelter in downtown Santa Ana.

The city and county have been at a stalemate over the proposed shelter, over issues like who pays for it, who operates it, and who decides which homeless people can stay there. County and city officials publicly disclosed several of the sticking points in Carter’s courtroom earlier this month, under questioning from the judge.

There also have been major disagreements about the shelter’s capacity, and whether it would be 700 beds or significantly fewer. Pulido publicly said 700 beds were possible at the property, when he was speaking to Carter at a June court meeting, and the judge has since said he is holding the city and county to that number.

Pulido’s capacity number took some officials by surprise because it would provide very little space for each homeless person and Carter has already called the crowded conditions unacceptable at the existing Courtyard shelter, said a person close to the negotiations who was not authorized to speak publicly about them.

Another person close to the negotiations said the property owners for the proposed shelter site have not wanted to sell or lease the land for a shelter. There have been discussions of Santa Ana potentially being willing to seize the property through eminent domain.

Neither the names of the property owners or the address of the proposed shelter have been made public.

The property owners “have expressed concerns in terms of the use. But our intent, ultimately at the end of the day, is either to purchase or to lease. That is our goal, in partnership with the county,” said Santa Ana Deputy City Manager Robert Cortez in an interview earlier this month.

Asked if eminent domain is an option, Cortez said, “I will not even comment on eminent domain, because those are very delicate proceedings. What I can tell you is we will go through whatever we can to go through an acquisition” or purchase process. And if this property does not work the city and county would look at other sites, he said.

“Santa Ana has a great need” for homelessness to be addressed, Cortez said. “And I completely agree with the judge in wanting all the cities to come up with their plans sooner rather than later. Because we’re getting a lot of constituent complaints, we see it in our community, and we’re trying to address it as fast as we can.”

Carter scheduled his next hearing for Sept. 7, and said city and county officials will need to make significant progress by then on plans for new emergency shelter housing for the homeless, or face a court order blocking the enforcement of anti-camping laws.