Despite widespread disapproval from local residents, the Board of Supervisors will be considering the Esperanza Hills project above Yorba Linda in County territory for the third time in late September. The Superior and Appellate Courts have already ordered the Board to revoke approvals for the project twice because of deficiencies in the Environmental Impact Report (EIR), a document required to assess project impacts. 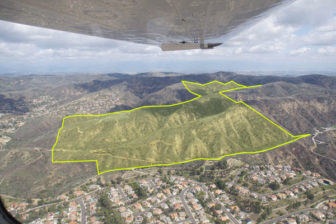 This aerial view of the Esperanza Hills property, outlined in yellow, shows its steep terrain and deep canyons.

Neighboring residents remain deeply concerned. The Esperanza Hills developer proposes 340 houses on 469 steep acres, but the site has other challenges as well: an extensive border with Chino Hills State Park; a propensity to burn; an active earthquake fault; numerous landslides; a major water pipeline; high-voltage power lines; and limited irregular access. Considering this laundry list of site constraints, who would want to build here? An Arizona developer—that’s who.

The property is a polygon with eight sides. Four sides border Chino Hills State Park on the north and east, and a fifth borders recently protected land to the west. Courts found the EIR maps failed to show the full extent of the boundary with the State Park—rendering the baseline setting inaccurate. This is important because the Park provides a permanent contiguous 14,100 acres of natural wildland. A historical look at where fires have burned before, shows a recurring fire pattern. If built, those 340 multi-million dollar houses will sit on land that has burned three times in the last 72 years. 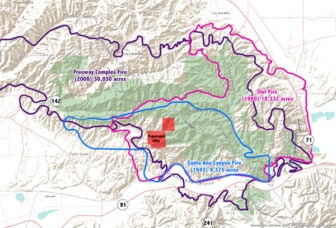 Three major fires—the Santa Ana Canyon, Owl and Freeway Complex—have all burned the site down over the last 72 years.

The State Park, the site, and homes, will burn again. We should know better now than to approve plans that put so many houses and people in harm’s way.

In addition, the active Whittier earthquake fault cuts across the property. This fault is capable of a 7.2M earthquake. The site also has multiple landslides. Yorba Linda has a long sordid history of landslides destroying homes. In order to contend with those slides, nearly 16 million cubic yards of dirt will have to be moved to take down the hills and fill in the canyons.

Crucial regional infrastructure also traverses the property. A major water pipeline operated by the Metropolitan Water District (MWD) provides daily water to Southern California residents. The up to nine-foot diameter pipeline sits at the southern end of the property and requires special attention for roads built on top of it. In addition, two rows of 500 kV Southern California Edison transmission lines cut across the entire eastern edge of the site, making aerial firefighting even more challenging.

Currently, there is only one secured way in and out of the site: a steep, undulating road with multiple hairpin turns. To enter, drivers must negotiate a hairpin turn to the west below a 15-foot retaining wall. Once over the hump of the MWD pipeline, there is another hairpin turn heading to the east. Then the road descends with an 11.5% grade and 37 feet of combined retaining walls on each side of the roadway leading down to the bottom of Blue Mud Canyon. A bridge spans the canyon and the road then climbs back to the west with 8% grades and 34 feet of combined retaining walls on each side leading up to the actual homes. Any number of disasters (fire, mudslide, or earthquake) could render this roadway impassable.

This singular daily access road empties onto the Stonehaven-Via Del Agua loop which itself is a steep residential street with only one lane in each direction. The loop was harrowingly gridlocked in the 2008 Freeway Complex Fire. Families fleeing by car were crammed three abreast only to get stuck at Yorba Linda Boulevard at the bottom of the hill. If Esperanza Hills is built, another 1,000 cars or more will be added to the throngs of panicked evacuating residents during the next major wildland fire. 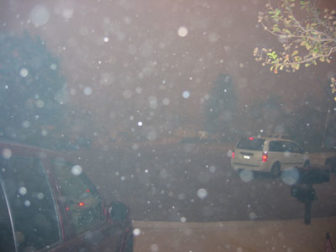 At a recent Planning Commission meeting, the Orange County Fire Authority stated that it only pays attention to getting fire trucks in—not getting residents out. Yet even gaining access in for fire trucks will be challenging. We learned in 2008, cars escaping the fire filled the loop road beyond capacity leaving no room for fire trucks to come in. Over 25% of the houses lost in that fire were located in the neighborhoods surrounding the proposed Esperanza Hills project. 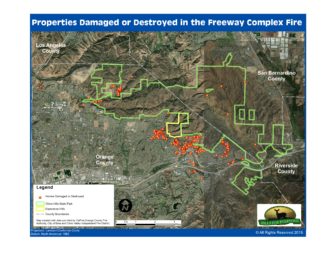 Over 280 properties were damaged or destroyed in the 2008 Freeway Complex Fire with over 25% in the neighborhoods immediately surrounding Esperanza Hills.

A second emergency-only road is actually a disputed easement with its own problems. The easement may apply to only 33 of the 469-acre site. The court has yet to decide how much of the acreage the easement applies to. This fire lane is proposed to enter on the same loop road only a stone’s throw down from the main project entrance.

Given the potential for loss of life and property, it’s no wonder this site has not been developed. The developer and County staff’s flagrant disregard for these cumulative risks is astonishing. Residents hope that common sense, safer planning, heeding the lessons of history, and the testimony of experts will win over reluctant Supervisors. We expect, the Board of Supervisors will hear the project at its Tuesday, September 25thmeeting.

Sharon Rehmeyer is a 30+ year Yorba Linda resident.  Her career was spent as an elementary school teacher for Whittier City School District. Since her retirement she’s been engaged with the resident based group Protect Our Homes and Hills.