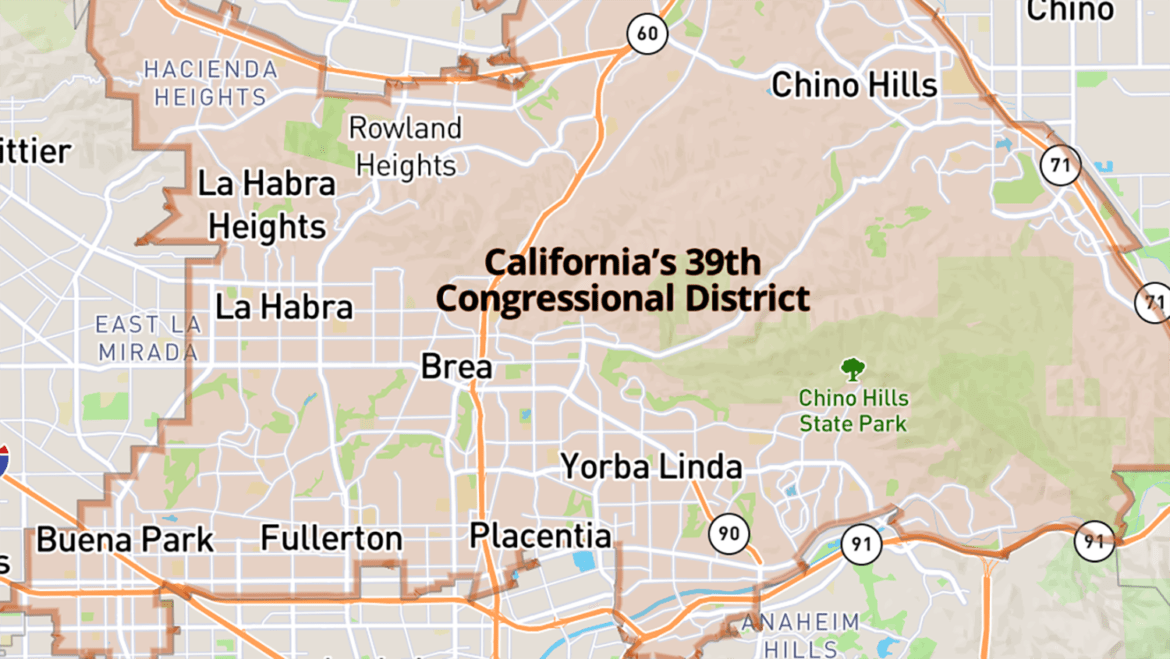 39th Congressional District candidates Republican Young Kim and Democrat Gil Cisneros traded barbs during a combative television debate that aired Sunday, frequently interrupting each other, steering the conversation to other topics and at times ignoring the show’s host Rick Reiff as he tried to move the conversation along.

The 39th District is one of four Orange County Congressional contests Democrats hope to win Nov. 6 in their bid to flip at least 23 seats nationally, which would give them control of the 435-seat U.S. House of Representatives.

Midterm elections typically are viewed as a referendum on the current President and party in power, and with Democrats seeking to capitalize on discontent with President Donald Trump, Inside OC host Rick Reiff asked Kim if she is “running with…or running away from the president.”

Kim, 56, a former state Assemblywoman and 20-year congressional aide for retiring incumbent Rep. Ed Royce (R-Fullerton), said she would be an independent and bipartisan congresswoman.

“There are issues where I would support him,” Kim said, citing the Trump administration’s recent tax overhaul. “And there are areas I disagree with, like family separation issues.”

When their views don’t align, “I will say so in the strongest terms,” Kim said.

Cisneros, 47, a U.S. Navy veteran and former shipping manager at Frito Lay, has become a philanthropist since winning $266 million in the California lottery in 2010.

Cisneros’ campaign and Democrats have sought to tie Kim to the President as closely as possible, paying for mailers that call Kim a “rubber stamp” for the President and a TV ad that labels her “Trump’s apprentice.” He said while Kim has tried to distance herself from Trump during the election, she’s failed to call out the President on issues like the separation of immigrant children from their families at the U.S.-Mexico border.

“When I’m out there talking to the people of the 39th district, they want someone who is going to hold the President accountable,” Cisneros said.

“Ed Royce hasn’t done that, and Young Kim won’t do that in Washington.”

Asked if he would vote to impeach Trump as a member of Congress, Cisneros said he would not, and instead wants to see special counsel Robert Mueller complete his investigation into alleged Russian tampering into the 2016 election.

The taped debate, which aired Sunday on PBS SoCal, was one of two congressional debates organized by Reiff, and the only debate where the campaigns agreed news media could attend. Reiff also hosted a debate between candidates for the 48th Congressional District, incumbent Republican Rep. Dana Rohrabacher of Costa Mesa and his Democratic challenger Harley Rouda, that was not open to reporters.

The 39th District show was taped Oct. 16 before a crowd of college journalism students, who were able to ask both candidates questions after the taping.

Kim and Cisneros previously appeared together on a FOX News show, The Issue Is, in September.

During the Inside OC debate, the two mostly disagreed on major issues but landed on the same page in a few instances.

Kim said she supports the Republican tax bill, saying it gives money back to the middle class. When Cisneros accused her of supporting a bill that will weaken Medicare and social security benefits – echoing an argument by Democrats that the GOP would cut those programs to pay down the national debt – Kim fired back: “That’s what Republicans have said, but I’m a different type of Republican that will fight to preserve and protect Medicare and social security.”

Cisneros said Kim voted along party lines as a member of the State Assembly, where Republicans are a minority in both houses, and said her support of the tax bill “hurt the people of California” through a provision that caps federal income tax deductions, which is currently unlimited, at $10,000 for state and local taxes.

“That is something I would fight to bring back,” Kim said.

“You just admitted, that this bill is hurting the citizens [of California],” Cisneros replied, setting off another exchange between the two.

“We are one question in,” said Reiff, while the candidates continued to argue.

Republicans were hoping to run on the tax bill ahead of the midterm elections, but are now pulling back from that strategy because of the unpopularity of the bill and backlash over the state and local tax deductions.

On immigration issues, both Kim and Cisneros have said they are against the separation and detention of immigrant children from their parents.

Cisneros questioned Kim’s commitment to that stance, pointing to comments Kim made to Bloomberg News in July where Kim said family separations were concerning but added, “I don’t want to see a crying child, but what’s the real story behind it?”

“I’m against family separation. I’m a mother, I’m a woman…I see these things and it breaks my heart,” Kim said during the Inside OC debate.

“Well then speak up against the president,” Cisneros replied.

Kim said she is against sanctuary cities because they “tie the hands of our law enforcement to be able to work closely with federal agents.” She added that she and Cisneros don’t differ much in that she wants a “fair process” and is against efforts to limit family sponsorship of relatives, noting she came to the United States that way.  Kim’s family immigrated from South Korea in 1975, when she was 13 years old.

Cisneros, questioning Kim’s credibility on immigration policy, said while Kim has stated support for the Deferred Action for Childhood Arrivals program (DACA) that creates a path to citizenship for certain undocumented youth, she voted against a bill in the state Assembly to create resource centers for undocumented students at public colleges and universities.

“In the primary, she talked about how her family immigrated to this country and others were just coming looking for a handout,” Cisneros said, referring to one of Kim’s early ads.

Reiff asked Cisneros about allegations of sexual harassment by a fellow Democrat that have followed him since May, until his accuser retracted those accusations earlier this month, calling them a “misunderstanding.”

The Congressional Leadership Fund (CLF), a political action committee supporting Republican candidates for the House, ran several ads about the harassment and accused Cisneros of trying to silence his accuser.

“Did you feel anything for Judge Kavanaugh?” Reiff asked, referring to sexual assault allegations against Supreme Court Justice Brett Kavanaugh that emerged during his confirmation hearings.

“I think our situations are totally different. I had one individual that has since retracted her statement,” Cisneros said. “Judge Kavanaugh has had multiple people come out against him.”

When Reiff pressed the comparison, Cisneros said he was “taking it too far.”

“She never said it was sexual harassment – it was never that,” Cisneros said.

Reiff turned to Kim, asking her about the ads paid for by the CLF about the sexual harassment allegations.

Kim said she never commented on the allegations against Kavanaugh or Cisneros.

“This is not an issue I was running on. The ads he’s referring to, they’re not my ads,” Kim said.

“You could say stop the ads,” Reiff said.

“Well that is being very naïve about how a superPAC is run,” Kim said, noting federal election laws that prohibit coordination between candidates and independent expenditure committees.

With just a few minutes left in the segment, Reiff asked the candidates to talk about how they differ on health care issues.

“My opponent wants to pursue a government run health care program, Medicare for all, that is already…bankrupting the system as is,” Kim said.

Cisneros said if Kim is concerned about coverage for people with pre-existing conditions she should “speak up.”

“The truth is, you’ve taken hundreds of thousands of dollars from insurance companies and Big Pharma, and that’s who you’re going to represent.”

That prompted another extended exchange where Kim criticized Cisneros for self-funding attack ads with his lottery winnings, and Cisneros criticized Kim for taking money from superPACs.

“I have never lost control of a show like I have this one,” Reiff said.