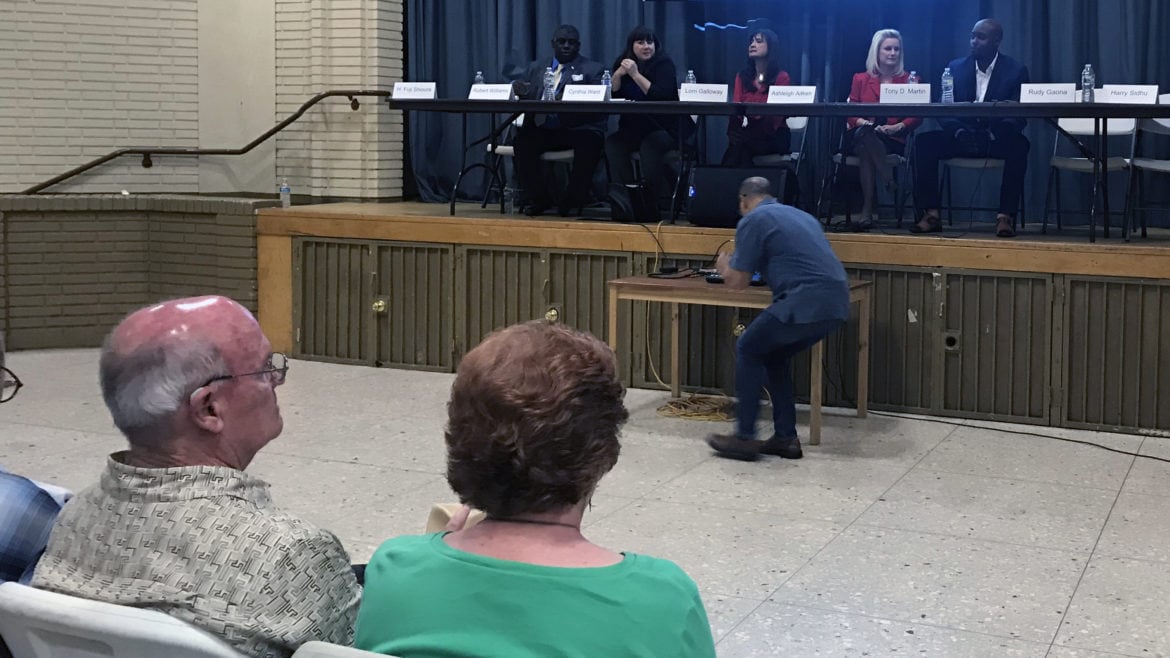 An Anaheim mayoral candidate forum turned into a debate over the role of the Disneyland Resort in the city elections and the minimum wage initiative on the Nov. 6 ballot.

“When we read in our newspapers that some of the richest corporations spent over a million-and-a-half dollars to take out community leaders and certain candidates,” said candidate Ashleigh Aitken just seconds into her introduction, “we need to stand together to make sure that this type of tactic and dark money is not acceptable.”

Aitken’s father, Wylie Aitken, chairs the Voice of OC Board of Directors and is a major financial donor to the news agency.

“Well, corporations are shouting louder than the citizens of Anaheim,” Ward said to applause.

All the mayoral candidates, with the exception of former city councilman Harry Sidhu and local business owner Rudy Gaona, were present at the Oct. 18 forum hosted by the Arab-American Civic Council at Saint Boniface Catholic Church in Anaheim.

Ashleigh Aitken specifically called out Sidhu and Galloway, who both received $2,000 campaign contributions from Disney.

Ashleigh Aitken’s position contrasted to one she took at a Sept. 13 candidate forum, where she expressed hope that Disney’s canceling two major tax subsidy deals with the city indicated the company’s readiness to be “a community partner.”

When she announced her campaign in 2017, Aitken told Voice of OC she generally supports subsidies and believes they are important incentives for businesses “if we can entice them to grow and build.”

“Ms. Aitken mentioned I took a maximum donation from Disney, which is $2,000,” said Galloway as the church’s evening bells rang out. “I received a lot of donations, but they do not control me. No one controls me. I wonder about the hundreds of thousands of dollars that Ms. Aitken took.”

Disney’s $1.5 million campaign spending in Anaheim is matched only by a coalition of labor unions representing Disney workers. The unions are currently pushing Measure L, which would require companies in the resort district receiving tax rebates to pay an hourly minimum wage of $18 by 2022, increasing by at least two percent each year after, depending on the cost of living.

Though Sidhu was absent from Thursday’s forum, he had voiced his opposition to the wage initiative at the Sept. 13 forum, where he called Disney the “golden goose” of Anaheim.

Sidhu said that day the wage dispute should be settled between Disney and the unions and “not by the ballot box.”

Williams drew boos from the audience of roughly 140 people atlast week’s forum after saying he had “no problem” voicing his opposition to the wage initiative.

The booing got louder when Williams added “If you don’t like what you’re doing, do something else. Don’t tell me there aren’t jobs out there. People don’t want to work.”

Shioura, who arrived late to the forum, called the wage initiative “a lie.”

A right-to-work law would prohibit employees in Anaheim from being required to join a labor union.

Galloway said during the forum she has supported the wage initiative for some time, despite her apparent Disney backing, and that she has always stood up “for fairness and dignity.”

Her response didn’t satisfy one member of the audience, who stood up and shouted “Answer the question, Lorri.”

“Lorri did stand up, and then she left (the City Council) and sat down,” responded Ward to the jeers of the audience, adding she thinks the wage initiative would have “unintended consequences” because of the way it was written.

Ward was one of the Anaheim residents who had expressed concern Oct. 9 over whether or not the wage initiative would affect other businesses like the GardenWalk Mall across from Disneyland.

Amid reports that the Los Angeles Angels opted out of their Angel Stadium lease with Anaheim Oct. 16, the candidates were asked what each would do to keep the team in the city.

“I was the one who called for a press conference on the steps of City Hall over (the $1 a year for 66 years deal),” Galloway said, referring to a defunct 2013 deal in which Anaheim would have sold land in the stadium parking lot to Angels owner Arte Moreno for $1 annually over a 66-year period for development.

In return, Moreno would have agreed to pay for an estimated $150 million in stadium renovations, according to the Los Angeles Times.

Mayor Tom Tait, currently in his final term, had publicly opposed the deal.

“We all remember Mayor Tait telling (the 2013 City Council) ‘Don’t do this.’ If they pull that trigger, we can point back to his decision,” Ward said on the deal. “That’s why we need new leadership at City Hall and not the same regurgitated nonsense.”

With three new council members and a new mayor slated for the dais, Angels spokeswoman Marie Garvey told the Times the decision to opt out was not meant to influence voters, and that the lease required the team to opt out no later than Tuesday, Oct. 16 or wait until 2028 for another chance to do so.

Galloway said keeping the Angels in Anaheim isn’t a matter of “what am I going to do to make them stay?

“They’re going to stay,” she said.

Aitken said she wouldn’t support a deal similar to the one that came out of 2013, which would mean “Moreno could leave in 2028, and we would still let him” retain the land in the parking lot.

“I’m a lifelong Angels fan,” Aitken said. “(But) I’m not gonna negotiate deals that give up any type of development rights.”