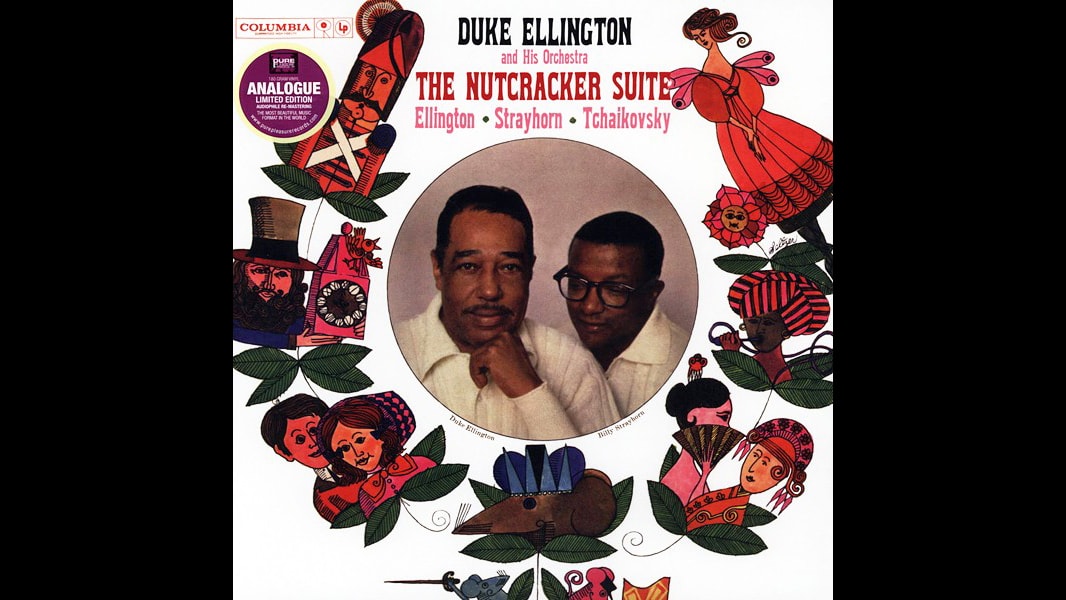 Pacific Symphony’s upcoming program includes one of the jazz world’s few Christmas-themed masterpieces: Duke Ellington and Billy Strayhorn’s “Nutcracker Suite.” Based on Tchaikovsky’s iconic ballet score, it’s a quirky and brilliant Duke/Strayhorn re-imagination of some of Tchaikovsky’s most familiar and beloved music.

The original cover photo for the album, released in 1960 and featuring members of Ellington’s incomparable big band, hints at the creative team’s approach. Ellington, Strayhorn and Tchaikovsky get equal billing on the Apollo Theater’s marquee.

The meaning was clear: this was to be considered a “co-composed” work, as if all three men had joined forces to produce the result. The suggestion is bolstered by the liner notes, where a fictitious Las Vegas meeting between Ellington and Tchaikovsky is described. (The Russian composer died six years before Ellington was born.)

Stretching the boundaries and definitions of jazz was a concept that’s typical of Ellington, particularly later in his career. More than many of his contemporaries, Ellington brought jazz into mainstream concert halls and into the living rooms of many Americans who otherwise wouldn’t have given it any attention.

Strayhorn, on the other hand, was less known to the world at large, although he had his devotees in the jazz realm. But even many Ellington fans probably didn’t know that this particular “Nutcracker” was Strayhorn’s idea.

Born in 1915 in Dayton, Ohio, into a poor, troubled family with an alcoholic father, Strayhorn grew up in Pittsburgh. His dreams of becoming a concert pianist were made challenging by America’s racial climate in the early 20th century. He also chose to be openly gay, which was rare at the time.

Strayhorn met Duke Ellington in December 1938, after an Ellington performance in Pittsburgh. Strayhorn had been a fan of the Duke’s since he had first seen Ellington’s band play in Pittsburgh five years previously. After the concert, he met Ellington and showed the bandleader how he would have arranged one of Duke’s own pieces. Impressed with this audacious young upstart, Ellington invited other band members to hear Strayhorn’s ideas.

Strayhorn worked for Ellington for the next 25 years as an arranger, composer, occasional pianist and collaborator until his death from esophageal cancer at 51. Ellington paid this tribute: “Billy Strayhorn was my right arm, my left arm, and the eyes in the back of my head; my brain waves [were] in his head, and his in mine.”

Strayhorn’s fans often suggested that he was the genius behind the Duke’s success, especially later in Ellington’s career when he began to stretch musically and conceptually. According to David Hajdu, author of “Lush Life,” an excellent biography of Strayhorn published in 1996, Ellington allowed Strayhorn the freedom to be who he was and to pursue his creative goals. He paid for the younger man’s rent, food and famously extravagant wardrobe.

Yet “The Nutcracker Suite” marks a milestone for Strayhorn. It was the first time his name received equal billing to Ellington’s.

“The Nutcracker Suite” was fairly popular when it was released, but the nine-song LP didn’t exactly light the jazz world on fire, nor did it find a home in the pantheon of frequently played holiday albums. It finally found a second life in 2010, when the score was published and orchestras began to perform it in holiday programs.

The biggest challenge of the suite is its virtuosic demands. The names alone hint that Ellington and Strayhorn were wreaking playful havoc with the original music: “Sugar Rum Cherry (Dance of the Sugar-Plum Fairy),” “Dance of the Floreadores (Waltz of the Flowers).”

The individual parts can be devilishly challenging, probably because they were being composed for the virtuoso members of Ellington’s band. You might hear hints of Stravinsky and other mid-20th-century classical music giants woven into the musical fabric. Strayhorn was a huge fan of the Russian master composer.

There are flashes of humor, too. In “Sugar Rum Cherry (Dance of the Sugar-Plum Fairy”), instead of adapting the delicate celeste theme for Ellington’s piano, the composers scored it for baritone and tenor saxophone — hilarious opposites of the tinkling keyboard instrument.

Classical Net reviewer Steve Schwartz sums up the reverence reserved for Elllington and Strayhorn’s accomplishment among serious musicians: “Gunther Schuller mused rather wistfully about the benefits of classical musicians looking hard at an Ellington score. For him, there were leaps of high imagination on every page. In Ellington’s ‘Nutcracker,’ they seem to come in just about every measure. I consider this one of the great American scores, and you’ll probably never hear it at your local symphony.”

Fortunately, this Christmas season in Orange County, you can.