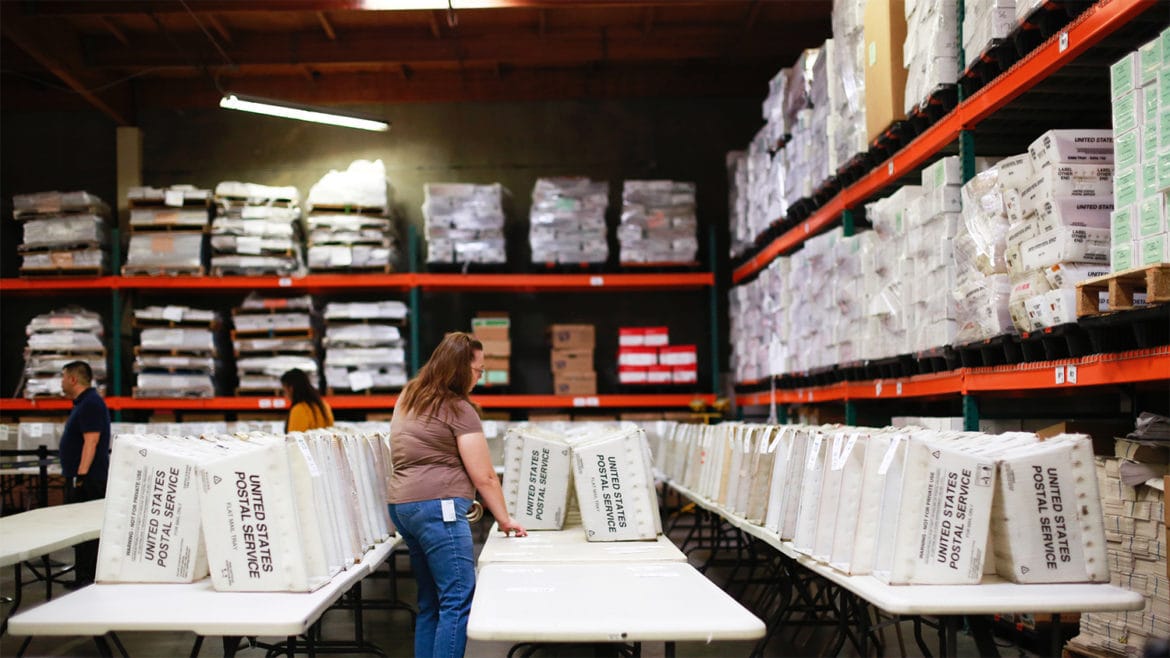 Boxes that had held mail-in ballots at the Orange County Registrar of Voters headquarters on Nov. 14, 2018, eight days after the general election, as counting continued.

Orange County election officials finished counting ballots Friday night and released the final results from the Nov. 6 election, in which midterm voters turned out at the highest rate in decades and Democrats gained major wins in local Congressional and state legislative seats.

With 71.0 percent of registered voters casting ballots, this was OC’s highest-turnout midterm election since 1970, according to data from county election officials. A higher share of people voted than in the 2012 presidential general election, when turnout was just over 67 percent.

The high voter turnout this year is believed to have helped Democrats, whose turnout tends to trail Republicans, particularly in non-presidential elections that have overall low turnout.

The final results in Orange County were posted at 9 p.m. Friday.

It took 3.5 weeks to count the OC ballots, with late-counted ballots trending towards Democrats. That led some Republican officials to question the results. On Thursday, U.S. House Speaker Paul Ryan reiterated those concerns and called California’s voting system “bizarre.”

Election officials say the tallying length was due to the sheer volume of ballots and larger number of ballots cast on paper – such as mail and provisional ballots – which take longer to count.

“Since this is the largest turnout midterm election since 1970, and matches presidential volume, the counting time actually matches similar election volumes,” said Neal Kelley, the Orange County registrar of voters.

Both parties will be tested again in March, when a special election is expected for Todd Spitzer’s 3rd District seat. Officially, supervisor seats are nonpartisan and do not have party designations on the ballot.

The county prosecutor’s office will also see a big shift, with voters ousting 20-year District Attorney Tony Rackauckas and picking Spitzer to lead the office, after prosecutors under Rackauckas were caught illegally cheating in criminal cases and withholding key evidence from defendants they were required to hand over.

“The losses in California and here in Orange County can only be described as catastrophic,” OC Republican Party Chairman Fred Whitaker wrote in a post-election newsletter.

“As a matter of fact, on many of the preliminary vote totals we’ve been looking at – significant numbers of Republicans we turned out, look to have voted Democrat. Whether it was on healthcare or the limitations on mortgage interest and state tax deductions, some of our voters defected,” he added.

OC Democrats also benefitted from tens of millions of dollars in outside spending for their Congressional candidates through ads and door-to-door outreach, which was seen as a driver in getting more Democrats to cast ballots.

Republicans have been losing voters for years in Orange County and statewide, as the number of voters who don’t declare a party grows.

Whitaker, referring to OC Republicans, said in his newsletter: “We have to get in the game and fight back…We are all in for 2020. The Democrats can keep our seats warm for us. But in 2020 we will take them back.”

OC congressional and state legislative districts dip into three other counties – LA, San Diego, and San Bernardino. While LA County finished counting ballots Friday, the other two apparently had not, though the vote margins in the key OC races are too large for the outcomes to change based on the remaining ballots in other counties.

For the first time in decades, all of Orange County’s Congressional seats will be held by Democrats, who picked up all four Republican seats in this election – and will now have all seven OC seats.

Royce and Issa chose not to run for re-election, while Walters and Rohrabacher tried to keep their seats but didn’t succeed.

Nationally, Democrats netted 39 Congressional seats in this election, surpassing the 23 they needed to win a majority in the 435-member U.S. House of Representatives.

Two of the election surprises were the ousting of Republican state legislators in western and coastal Orange County: state Sen. Janet Nguyen of Garden Grove and Assemblyman Matt Harper of Huntington Beach.

The flipping of their seats adds to the Democrats’ supermajorities they gained in the state Legislature in this election.

Nguyen was elected to the 34th District in 2014, after serving on the Garden Grove City Council beginning in 2004 and the Orange County Board of Supervisors from 2007 until she went to the Senate.

During an earlier part of this decade when Nguyen was a county supervisor, she demonstrated how a county supervisor could use their power over doctors and hospitals at CalOptima, the county-run health plan for low-income and disabled residents, to fundraise campaign money for themselves.

Republicans did not pick up any OC-based state legislative seats in the November election. But earlier in the year, during the June primary, the GOP succeeded in recalling OC Democrat state Sen. Josh Newman of Fullerton and replacing him with Republican Ling Ling Chang, who will hold the seat until at least 2020, when it’s up for re-election.

The five-member Board of Supervisors oversees the $6 billion county administration of homelessness, mental health, social services, law enforcement, public works and other services.

There’s a New DA in Town (And Sheriff)

Supervisor Todd Spitzer, after years of eyeing the top DA job and $2 million in fundraising, ousted incumbent DA Tony Rackauckas, whose office was mired in controversy over a cheating scandal in which prosecutors’ conduct has led to dismissed or reduced charges in at least half a dozen criminal cases.

OC Supervisor Todd Spitzer, who is on track to take over the District Attorney’s Office from Rackauckas in January, has begun laying out his plans for the county prosecutors office.

In interviews after the election, Spitzer said he plans to step up prosecutions of hate crimes, will meet regularly with communities that feel they’re treated unfairly by law enforcement, will not evaluate prosecutors based on conviction rates, will be more transparent with the public, and will hold police officers and prosecutors accountable.

In the county sheriff race, Undersheriff Don Barnes beat Democrat LA County District Attorney investigator Duke Nugyen in the run to replace retiring Sheriff Sandra Hutchens. Barnes, whose largest campaign support came from the sheriff’s deputies union, was endorsed by Hutchens and is seen largely as continuing many of her main policies.

Barnes has called for keeping the county’s contract with jail phones provider GTL, after it was revealed the contractor was illegally recording inmate phone calls with their attorneys – a felony in California – and efforts by Spitzer and Nelson to cancel the contract.

Barnes said GTL has taken steps to ensure it doesn’t happen again, and recommended hiring a second contractor to make sure GTL is following the rules when it comes to recording.

Another Republican Supervisor Seat Opens Up in March

With Spitzer, a Republican, planning to step down as a county supervisor on Jan. 7 to take over as DA, a special election for his seat will be held in March.

In comparison with Nelson’s seat, Republicans have more of a structural advantage with Spitzer’s replacement when it comes in voter registration and that election’s timing.

Additionally, Republicans tend to have more of an advantage in special elections, due to lower overall turnout widening Republicans’ higher-turnout advantage.

Already, five candidates are known to have announced bids for Spitzer’s seat, with one dropping out and backing a fellow Democrat.

On the Republican side, the known candidates are Anaheim Councilman Kris Murray and Irvine Mayor Don Wagner.

Krom announced last week she was dropping out and endorsing Sanchez for the supervisor seat.

Instead, Krom said she would be running for chair of the Democratic Party of Orange County, after current chair Fran Sdao announced she’d be stepping down.

Candidates backed by Walt Disney Corp. with about $1.2 million in election spending gained a majority on the seven-member Anaheim City Council.

Councilman Jose Moreno, a critic of city taxpayer-funded subsidies to Disney, was also re-elected and is slated to be in the minority on the council.

In Santa Ana, Mayor Miguel Pulido won re-election over Councilman Sal Tinajero, who challenged him for the mayor’s seat, though Pulido won by his narrowest margin since at least 1998.

Also elected to the council were David Penaloza, who was supported by the city police officers’ union; former Councilman Roman Reyna; and Ceci Iglesias; a local school board member and Republican Party-endorsed candidate. It appeared no single major interest group in the city had a clear majority on the council.

The campaign committee that handled the money is now under state investigation, and appears to be linked to Pam Sapetto, a lobbyist for real estate developers in the city.

About three weeks after the election, on Nov. 26, Sapetto said she was not currently involved in the dark money groups. She did not respond when asked if she was previously involved.

Pulido is now termed out from the mayor’s seat, with the next mayoral election in 2020. That means the incumbent mayor won’t be on the ballot for the first time since 1996, when he ran for his his first re-election as mayor.