Ambassador R. Nicholas Burns to Address the World Affairs Council of Orange County on “American Policy in the Trump Era.”

Irvine, CA – The World Affairs Council of Orange County (WACOC) has organized a special lunch event and conversation with Ambassador Nicholas Burns for a discussion on “American Policy in the Trump Era” to take place on Friday, February 22nd, 2019, 12:00 PM to 2:00 PM at The Caspian Restaurant in Irvine, CA.

The World Affairs Council of Orange County invites you to attend a luncheon event on Friday, February 22nd, with one of our country’s most distinguished diplomats, Ambassador R. Nicholas Burns (Ret.).  Ambassador Burns will discuss major trends challenging global peace and stability including a weakening U.S. leadership role, the U.S.-China competition for power in the Indo-Pacific, and his analysis of the North Korean nuclear crisis.  He will also examine prospects for stability in the Middle East and Europe as well as the deepening political crisis in the U.S. 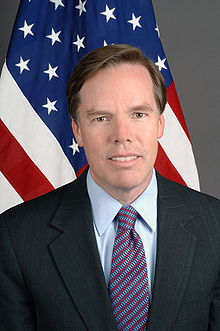 About our Speaker:
Ambassador Burns has had a stellar career in the United States Foreign Service spanning over 27 years. From 2005-2008 he served as Under Secretary of State for Political Affairs where he was the third highest-ranking official in the State Department and served as lead negotiator on Iran nuclear issues and on the U.S.-India civil nuclear agreement. Ambassador Burns also served as U.S. Ambassador to NATO (2001-2005) and to Greece (1997-2001), as well as serving as the State Department Spokesman (1995-1997). Prior to that, he worked on the National Security Council as Senior Director for Russia, Ukraine and Eurasian Affairs. He was special Assistant to President Clinton and Director for Soviet Affairs for President George H.W. Bush.

Here is the flyer about the event.