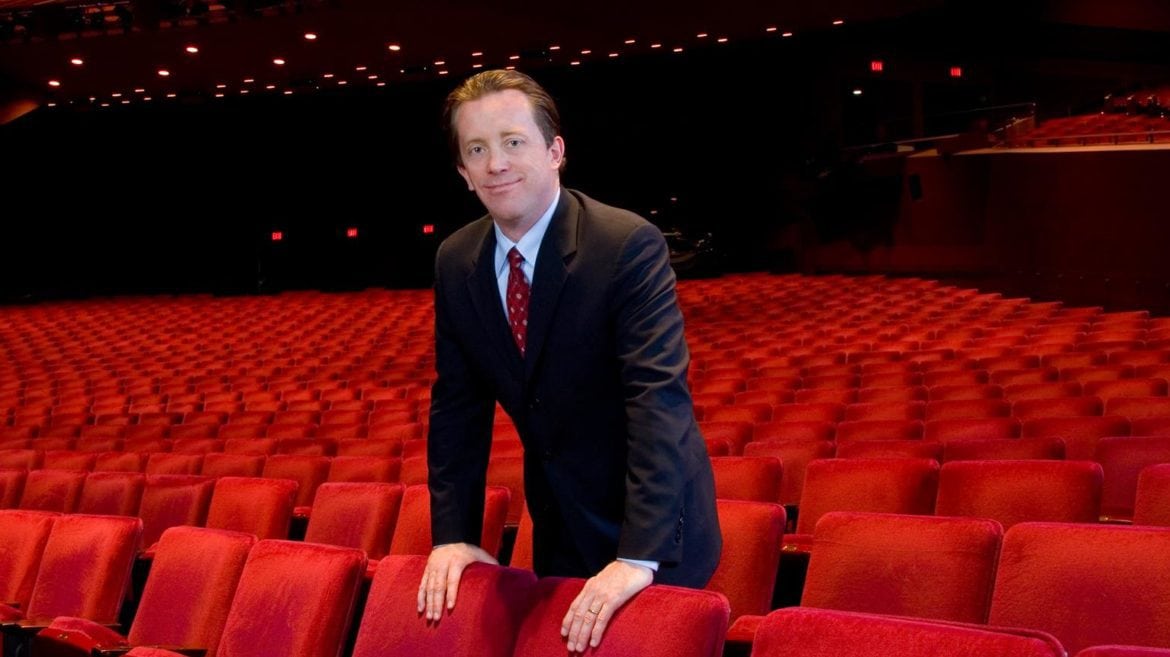 Terrence W. Dwyer, former president of the Segerstrom Center for the Arts, was a stoic yet effective leader during his 13-year tenure with the organization. (Photo courtesy of SCFTA)

Terrence W. Dwyer is no longer president of the Segerstrom Center for the Arts, and the reasons why he left his longtime position as Orange County’s most powerful cultural leader remain unclear.

The announcement was made late Friday afternoon – the best time of the week to release bad news, as any publicist knows – and local media were caught sleeping. (Only Voice of OC covered the story the day it happened.) Those who follow personnel changes at the Segerstrom Center know that a certain level of mystery and a complete absence of explanation have marked the departure of several key employees over the last few years.

There are a few clues that the split was less than amicable. Dwyer wasn’t present at a 3 p.m. all-hands-on-deck meeting that was hastily called to announce his departure. The Center’s Friday press release contained no quotes from Dwyer. And Dwyer abruptly hung up when he was telephoned by Voice of OC on Saturday to comment.

Annual fiscal reports were due on Friday; perhaps that is no mere coincidence. But at this point, speculation is unhelpful.

A look at Dwyer’s nearly 13-year tenure at the Segerstrom Center offers no obvious rationale for such a hasty and undignified goodbye. By many measures, he was the most effective leader in the institution’s 33-year history.

When Dwyer was appointed in 2006, he was handed a plate crammed with thorny problems. First among them was the financial burden of Center’s new Renee and Henry Segerstrom Concert Hall, which had been plagued by cost overruns totaling nearly $40 million during its construction and was mired in lawsuits over the issue. After considerable haggling that included a $38-million countersuit, a mediated settlement was reached in the spring of 2009 with the concert hall’s construction contractor and architects, but a fundraising shortfall for the concert hall remained a burden for years.

Dwyer’s early years were buffeted by such inherited crises. The Center, which opened in 1986, suffered its first budget deficit in the 2007-08 fiscal year, a $13-million splotch of red ink caused mainly by financial woes tied to the concert hall and exacerbated by the Great Recession. Dwyer and his management team laid off seven full-time and three part-time employees in January of 2009 and later ordered a 14% reduction in salaries and benefits (executive-level staffers agreed to a 16% claw-back); an emergency fundraising drive was organized to try to balance the budget.

Dwyer survived that turbulent period by leading with a steady hand. His skill sets were ideally suited to the challenges he faced and the larger-than-life personalities he had to contend with on the Center’s big and often contentious board. He had been managing director of the La Jolla Playhouse from 1992 to 2004 and served in the same position at Houston’s Alley Theater from 2004 to 2006 – crucial second-in-command roles at two of America’s most prominent theater companies, both run at the time by mercurial and notoriously temperamental leaders.

Dwyer’s later years at the Segerstrom Center were marked by considerable financial and artistic success, as well as the fulfillment of two projects that were near and dear to his heart: the Off Center Festival, which brought badly needed cutting-edge fare to the Center’s line-up, and Argyros Plaza, which little more than a year after its opening is becoming the humanizing and democratizing catalyst that Dwyer hoped it would be. Dwyer was undoubtedly pivotal in working with Center executive vice president Judy Morr on her pet project, the establishment of the ABT Gillespie School at the Center, which has burnished its already sterling reputation in the dance world. 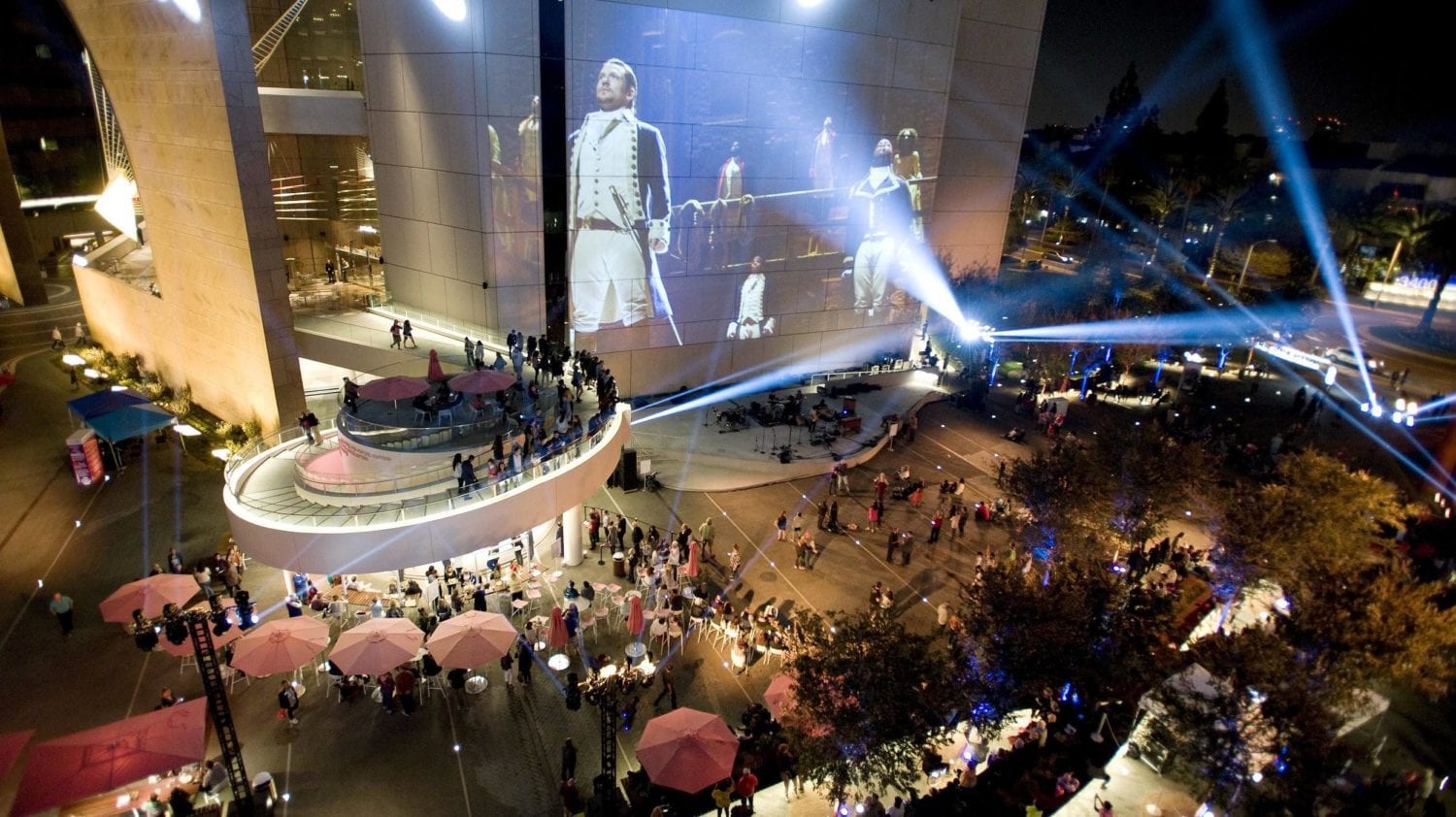 The Argyros Plaza at the Segerstrom Center for the Arts cost about $15 million to construct. Its grand opening was in the fall of 2017. (Photo by Nick Koon; courtesy of SCFTA)

In person, Dwyer contrasted sharply with his predecessor, the ebullient Jerry Mandel. Quiet and careful in his manner, he’s a good listener who chooses his words shrewdly. In a place where maverick spirits, conspicuous wealth and unabashed showmanship are increasingly the distinguishing features of the philanthropic community, Dwyer’s no-drama, self-effacing management style was refreshing.

Clearly, it was also effective. He held an inherently risky position longer than anyone else, and he steered the Segerstrom Center through its years of greatest crises. Whether Dwyer is leaving for better opportunities elsewhere or was forced out by behind-the-scenes disputes with board members or other headstrong titans, his impressive list of accomplishments cannot be denied. He will be missed.