EXPOSING WASTE: Almost every city in Orange County is a member of ACC-OC, although they don’t have to be. The City Council members vote (usually annually) to use taxpayer dollars to join and pay dues out of the general fund to the ACC-OC. Then they expend taxpayer dollars on themselves to attend dinners, receptions, “training” and other fun trips.

At the Association of California Cities -Orange County, your elected officials are heavily influenced by lobbyists, consultants and others who benefit at the public trough. There’s an upcoming reception April 17 with “heavy hors d’oeuvres” (even though the promoters don’t know how to spell it) and “cocktails.” Cost is $35 per council member ….. and that’s on top of annual dues.

Is your city a member of ACC-OC?

Residents should note that ACC-OC is just one such organization that siphons off your tax dollars for such waste. Others include League of Cities and SCAG. They do this under the auspices of “regional planning.” Others would call it “centralized planning” and it takes place out of the watchful eye of the public.

While I was on city council I voted against being a member of the League multiple times and eventually was able to convince my colleagues to join in leaving that organization for a few years. This was in the about 2010 – 2014. This is not a new issue for me. I am and have been very vocal about my opposition concerning organizations like this. That money should be redirected toward taking care of the needs of cities, citizens and communities — not wining and dining elected officials, which is essentially all these groups have morphed into.

You can go to the ACC-OC website and see what sort of policies they promote.   http://www.accoc.org

After my initial post pointing out the cocktails and hors d’oeuvres, there was a very quick correction and a new flyer emailed out that clarified this was a “Hosted Reception.” 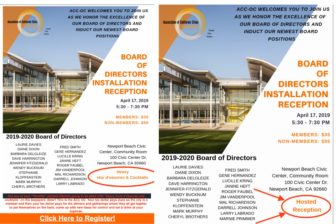 By “Hosted Reception,” ACC-OC means that the entities that lobby your elected officials have paid for the alcohol and food with which they will ply your city representatives. Now, doesn’t that make you feel better? It’s not really your tax dollars paying for that portion of the evening’s expenses. You can see a list of “Affiliate Members” who may or may not have contributed to the Hosted Reception by scrolling down the page here: http://www.accoc.org/who-we-are/acc-oc-members/

Deborah Pauly is an elected member of the Republican Party of Orange County, representing the 68thAssembly District and a former Councilwoman in the City of Villa Park.