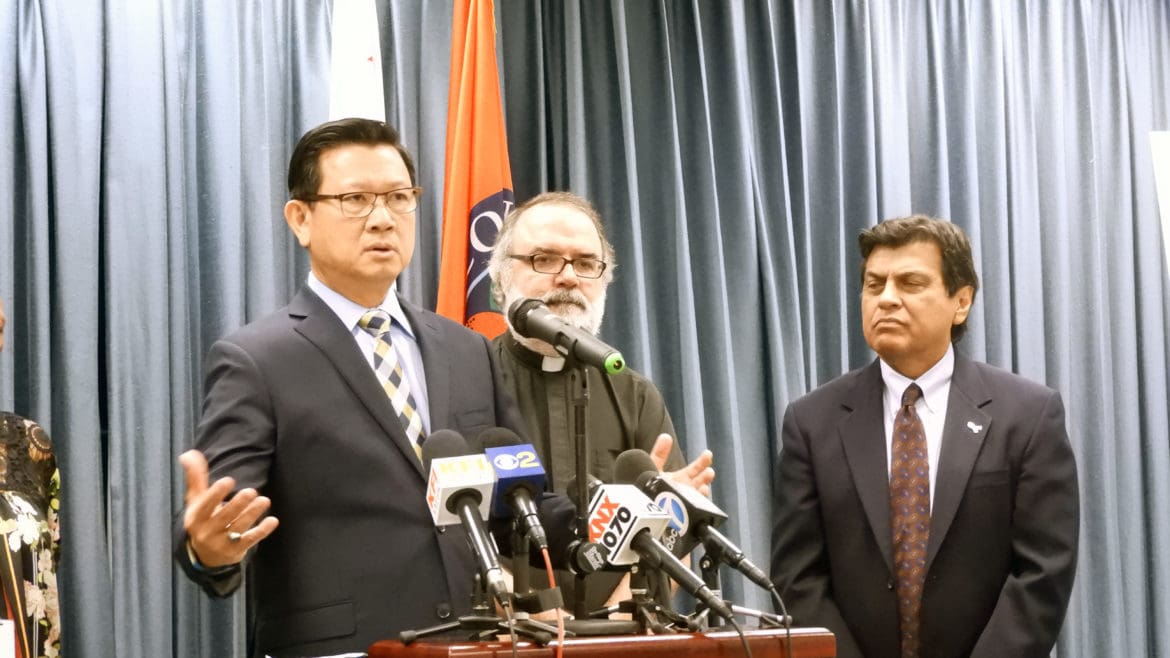 Supervisor Andrew Do said Wednesday the County isn’t trying to take over CalOptima, the county health plan for the poor and elderly, but he criticized the agency for not providing homeless people health care fast enough.

“The CalOptima Board (of Directors) is a creation of the Board of Supervisors. We don’t need to take over something that we own,” Do said after a news conference.

“To a large degree, we the Supervisors, try to be respectful and let the CalOptima board do their work independently,” Do said, answering questions from reporters. “But when we see a massive failure like we do now … this is the time for me, as county supervisor, to step up.”

In a later text message, Do said “there’s never been even any mention by anyone to bring CalOptima into the County.”

CalOptima board Chairman Paul Yost said the agency has already been implementing the recommendations Do is making.

“We’re doing a lot of the things that he wants. I don’t understand quite where he’s coming from,” Yost told Voice of OC. “We have been moving in the direction of getting clinics into the (homeless) shelters and we’ve taken this issue extremely seriously. I’m not sure why he didn’t communicate this (letter to CalOptima) to the ad hoc committee (for homeless services).”

CalOptima, the federal and state financed health plan for the county’s poor and elderly, has come under fire from Do in the past few months for what he claims is a slow implementation of homeless medical care. Do sits on the 10-member board, but only nine vote. The non-voting member is Health Care Agency Director Richard Sanchez, who was also at Wednesday’s news conference. The board is appointed by the county Board of Supervisors.

Do was originally on an ad hoc committee for homeless services, which was formed by the CalOptima Board of Directors during the creation of medical teams for homeless people in February. He pulled himself off before the committee’s first meeting and Sanchez still sits on the ad hoc, Yost said.

At the news conference, Do highlighted spending recommendations on the $60 million.

Yost said the committee has been meeting weekly to make spending recommendations on the $60 million.

“So basically we’re disappointed that Supervisor Do did not share his comments with us. All of his issues that are in his letter are currently in discussions in the ad hoc committee. If he hadn’t taken himself off the ad hoc, perhaps he’d know that,” Yost said.

Do, who’s up for reelection next year, didn’t directly say if he had relayed his concerns to the ad hoc committee or other agency officials. But he did lay out increased recuperative care housing and some other healthcare proposals for homeless people at the February CalOptima meeting.

“The ad hoc committee has had enough time to go to Sacramento twice to protect their interests in preserving CalOptima’s reserves, yet they can’t come up with one proposal, other my idea for the mobile Health Team,” Do said in a text message.

Yost said a working partnership with the County is crucial for the homeless population and the ad hoc went to Sacramento to lobby for health services for homeless people. He also said CalOptima is currently pooling with the shelter operators from the large homeless shelters around the county to begin setting up medical clinics where the homeless people sleep.

“This is just a start. We know that we have to do more and we’re working to do more,” Yost said. “I just really wish he’d talk to us and I just wish he hadn’t taken himself off the ad hoc. We need to partner with the County and have a cooperative relationship. Our patients deserve that, they need that, the homeless population. Our patients lives depend on it.”

CalOptima’s next board meeting is June 6.

The agency’s board of directors voted in February to create the medical street teams aimed at treating homeless people in camps and at large shelters in response to the rising homeless deaths and after CalOptima officials met with U.S. District Judge David O. Carter, who presides over a lawsuit against the County for its homeless policies stemming from the Santa Ana Riverbed evictions.

Carter met with CalOptima CEO Michael Shrader, Yost, Do and Sanchez Feb. 20 — two days before the emergency meeting that created the medical teams.

Do verbally sparred with CalOptima staff and board members about the agency’s progress on homeless services during the March 7 board meeting, when he warned the agency was too slow in implementing the medical teams and it could negatively impact the agency when it was requested to appear at the April 2 court hearing in Carter’s courtroom.

Shortly after Father Dennis Kriz published a series of opinion articles detailing the deaths of over 250 homeless people last year, Carter issued an emergency request to the Orange County Sheriff’s Department in February for detailed reports on the deaths. Kriz runs a nightly homeless shelter out of St. Philip Benizi’s church in Fullerton.

The judge called the rising deaths “a public health crisis.”

According to Kriz, who was at Do’s news conference Wednesday, an average of 19 homeless people have died each month this year.

“It’s on pace, presently, as the year before,” Kriz said.