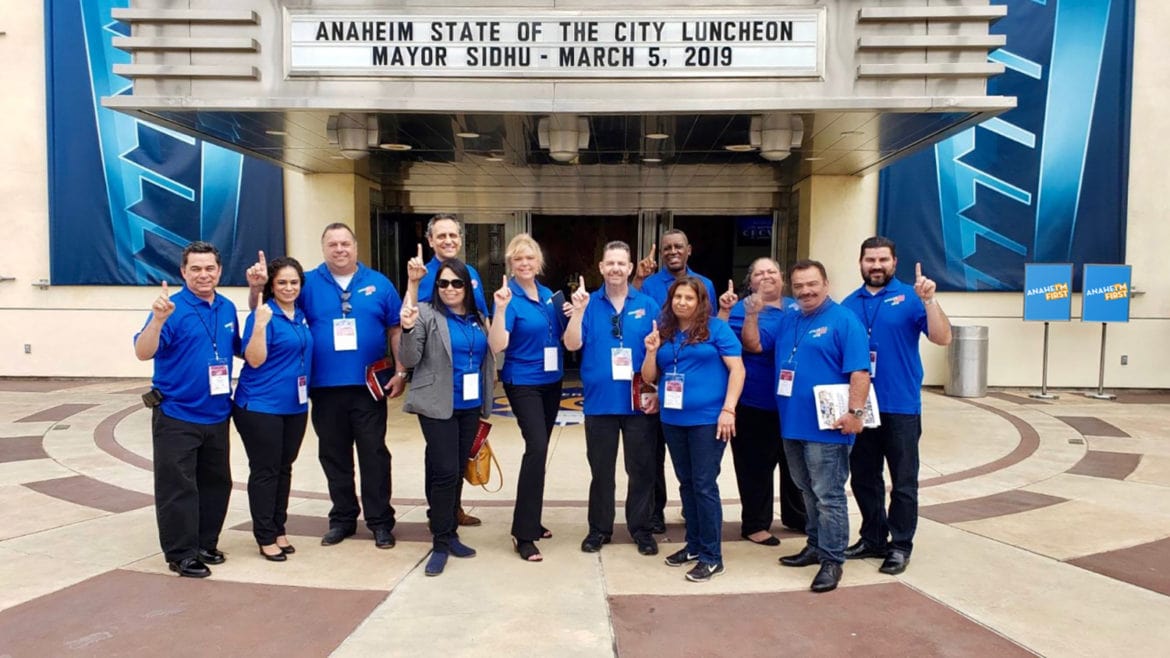 Critics say Anaheim First, a nonprofit formed by businesses that’s going to make $250 million in city spending recommendations over the next decade, is too close to businesses and lacks transparency.

The group was organized last year by the Chamber of Commerce and Visit Anaheim, a resort-funded organization promoting tourism and business. Anaheim First didn’t respond to multiple requests from Voice of OC.

The City Council voted 5-1-1 April 16 to give the group $250,000 to begin a community assessment to study neighborhoods throughout the city and make spending recommendations to the Council. The recommendations will be on Mayor Harry Sidhu’s initiative to spend $250 million on various neighborhood projects over the next 10 years. Moreno dissented and Councilwoman Denise Barnes abstained.

“This looks pretty weird to me,” wrote Chapman University political science professor Ken Stahl in a May 2 email in response to Voice of OC questions.

“There’s no real indication of why this program is necessary or what the funds will be spent on.  You don’t put $250 million towards such a vaguely defined program ordinarily. The council should at least be defining the parameters here,” Stahl said.

Fellow Chapman University political science professor, Fred Smoller, said its odd that a private group is making spending recommendations to a city that should already know what spending is needed on neighborhood projects.

“It just seems like an unusual situation — I’ve never seen anything like it,” Smoller said. “Well, this is the city that brought us ARTIC, a $190 million train station that nobody uses.”

“I have never seen anything like this before, in my 20 years of activism, I have never seen any city council create an entity like this,” Roberts said. “In my opinion this is an attempt to bypass the city charter and create a commission … that doesn’t have to be held accountable for any of the rules and laws which other similar bodies have to abide by.”

According to campaign finance data, the Chamber of Commerce spent nearly $240,000 on Sidhu’s 2018 campaign for mayor. The Chamber paid for consulting services, digital advertising, polling and political mailers for Sidhu.

An advertisement promoting Anaheim First ran in the May 2 print edition of the OC Register’s Anaheim section (seen at right).

Sidhu’s picture is also featured on the Anaheim First website as of May 6. He’s the only member of the City Council mentioned or pictured on the site.

“For all of our districts, all of our neighborhoods and all of our residents, I want them to know that in Anaheim, they are first,” reads a statement under Sidhu’s picture on the website.

Anaheim First described itself as non-political during the April 16 meeting and an undated city news release said, “The committee is nonpolitical with members selected based on their civic participation.”

Jeanine Robbins, who attends nearly every City Council meeting and is part of Housing is a Human Right OC, said nobody from Anaheim First has returned her emails seeking participation in the group.

Housing is a Human Right OC is one of the most active groups in the city and Robbins, along with other volunteers, meet weekly at La Palma park to pass out hot meals, clothing and toiletries to homeless people. From there, members take meals and supplies to deliver to various homeless camps throughout the city.

“They had already handpicked the people they wanted on there. Handpicked people who are in line with the Chamber of Commerce,” Robbins said. “So it’s a way of paying back Harry Sidhu’s campaign donors. Trevor O’Neil’s campaign donors, too — the council majority is the best way to put it.”

Robbins, like other Anaheim First critics, asked why the group was needed.

Moreno said while he thinks it’s good the business community wants to get involved in neighborhood projects, Anaheim First shouldn’t get $250,000 from taxpayers to study community issues to make spending recommendations — the group should have paid for that itself, he said.

The city has various departments, along with resident commissions and boards that already know what issues Anaheim neighborhoods face, he said.

“This is is this is why we have boards and commissions,” Moreno said. “I would be extremely concerned if the city already didn’t know what are the needs across the city in terms of infrastructure, programming, parks, housing conditions and the overall condition of life for children, families and small businesses. That would be surprising. I have not found that in my two years on the City Council.”

He also said that city departments hold community meetings in the districts to gather public input on project spending and other areas like parks and neighborhood infrastructure like streetlights and sidewalks.

Council members can have community meetings in their neighborhoods to hear residents’ concerns to make policy recommendations to the council, like Barnes’ citywide park infrastructure study in 2018, Moreno said.

“In a district environment, if you ignore your residents and people who want to talk with you in the neighborhood, that gets around pretty fast. So it really becomes a disincentive for elected officials to ignore their constituents,” he said.

Many of Anaheim First’s initial members have ties to pro-business organizations like the Anaheim Chamber of Commerce, Visit Anaheim and Support Our Anaheim Resort (SOAR), a political action committee funded by Disney in 2018. Disney gave SOAR at least $1.2 million in cash contributions in 2018, according to campaign finance data.

Gloria Ma’ae, an initial member of Anaheim First, is also a member of SOAR and was an outspoken critic of the hotel workers wage increase measure in 2018. A political ad urging residents to vote no on the measure featuring Ma’ae was posted in Anaheim First’s Instagram page in October. The wage increase applies to hotels that receive city subsidies. She could not be reached for comment.

Moreno’s 2018 City Council opponent Mitch Caldwell is also on Anaheim First and was heavily backed by SOAR — the group spent $358,000 in independent expenditures on Caldwell’s campaign. Caldwell also couldn’t be reached for comment.

SOAR also spent at least $350,000 in independent expenditures on the 2018 campaigns of both O’Neil and Brandman.

Moreno said many of the members, who are listed on the Anaheim First website and the OC Register advertisement, have strong ties to the resort industry, were outspoken critics of district elections and were against the $18 hotel minimum wage measure in 2018.

“Most of these folks, when you look at who they are, are functions of the Chamber of Commerce,” Moreno said.

Many of the Anaheim First members were active in promoting business-friendly stances on measures and candidates in the 2018 election, Moreno said.

“They were very involved in the elections and how this is their payoff: a pay-to-play system. And it certainly reflects why the Disney corporation and the Chamber of Commerce and the Orange County Business Council and other corporate interests would spend millions of dollars on local city council elections. This was the payoff,” Moreno said.

Anaheim First’s Instagram page was wiped clean sometime after the April 16 meeting and as of May 6, the Anaheim First Instagram account no longer has followers, posts or pictures.

The group was also criticized for not having a board of directors listed on the Anaheim First website or having articles of incorporation available on the website by the time of the City Council meeting.

But the Anaheim First website was updated after the April 16 meeting and it now lists the board of directors, which includes Chamber of Commerce CEO Todd Ament and Visit Anaheim CEO Jay Burress.

The legally required articles of incorporation establishing Anaheim First as a non-profit were filed to the California Secretary of State April 11, five days before the council meeting.

According to details provided by a website domain name search, the Anaheim First website was created in June 2018 by Christina Dawson — senior vice president of operations for Visit Anaheim. The physical address the website is registered to is the Anaheim Convention Center.

“One of the big concerns I had was there were no deliverables, there were no outcomes, no financial audits embedded in the agreement. It was just give $250,000 to a nonprofit, no questions asked. And that was the way of previous councils … and we began to dismantle that and that’s now been restored by the new council,” Moreno said.

He also said he fears Anaheim First will collect data for political purposes.

“Its goal is to confuse the general public to think they’re a legitimately formed group and I get concerned that data will get collected using city resources that could go into a political body.”