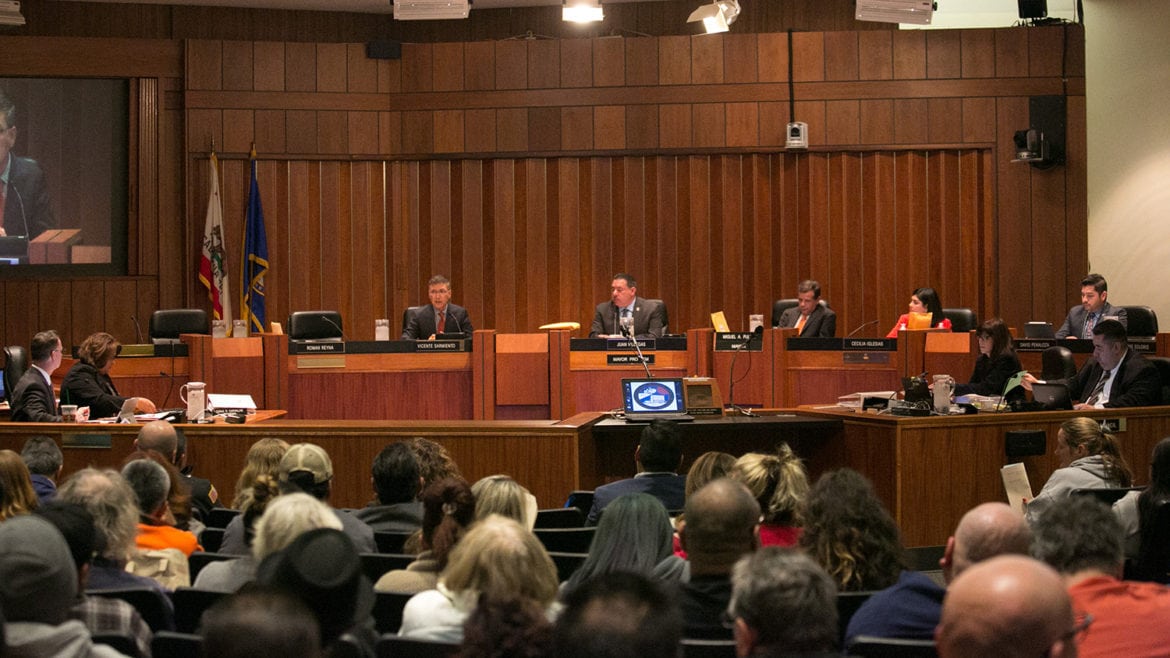 Santa Ana City Council members and the public at the council meeting on Feb. 2, 2019.

A recall attempt on two city council members in Santa Ana has revealed an odd partisan twist to the city’s latest budget battle – whether to spend $25 million in new sales tax revenues on police raises as opposed to neighborhood investments.

Months later, in February, a split city council authorized a $25 million pay raise package, with Iglesias and Villegas opposing the effort. The issue is still in play because city finance officials may soon have to move money around the budget to keep funding the raises through the end of the fiscal year, which comes next month.

Both Iglesias and Villegas say they’ll oppose any effort to move mid-year budget money around to cover the raises. Iglesias told me she’d even consider going to court if city bureaucrats made such a move.

So now saddled with Orange County’s highest sales tax – also approved by city voters last November to supposedly balance the budget – it looks like Santa Ana residents themselves won’t get much relief from the new money in the budget any time soon.

The $25 million police raise package also comes at a horrible time for the city budget, with finance officials publicly warning council members that handing out new raises now will tip the city budget into a dark place, not to mention wipe out any kind of community investments, like parks or sewers.

Having granted $4.3 million in pay raises this past February, council members took a $600,000 shortfall this fiscal year and grew it to $4.8 million.

They have yet to authorize a plan to make up the shortfall so they can keep funding the raises through the end of the year.

That kind of approach makes it clear that council members don’t have any clear plan for the future of their police department.

Forget about seeking fundamental reform on the police budget, which continues to soar due to costly police pensions. Or asking truly tough questions about continued department overtime spending or crime trends across the city or community policing.

Santa Ana community residents and activists have raised all of these issues, again and again, at community election forums during the last decade. Indeed, many of those sitting on the dais have in times past promised leadership in these areas.

“Those are common sense questions we all should be asking,” said Iglesias, in a recent interview last week, days after being notified of the recall effort against her.

“Those are the questions I’ve been asking,” she added, stressing the need for the general public to attend and comment at city council meetings.

“It takes more than two (council members) to get staff to move in one direction,” said Iglesias, a former school board member who works at the California Policy Center and was elected with strong support from Santa Ana’s evangelical community.

Iglesias said her ability to exist as an independent, Republican, voice in Santa Ana is because she has gone out and won her own grassroots base of residents. That gave her the strength to withstand the tough campaign mail against her from police union interests in the last election, she said.

“The more we have the public participation in asking these questions at our council meetings, and holding everyone accountable, that’s when things are going to turn around.”

The budget debate over the police raises also should fuel a debate about whether a real district election system in Santa Ana – where neighborhood residents get to really elect people who live in their neighborhoods – needs to be instituted to curb special interest influence and spur more independent council members.

For now, it doesn’t seem that any of the Democratic Party politicians on the council dais have secured anything in return for the community from police or city leadership after granting expensive raises.

So far, Santa Ana’s Blue Wave is mostly doubling down on the status quo.

In turn, it’s come to two conservative Latino elected leaders to stand up on the dais to incredible political pressure, not only saying no to police spending but also asking tough questions about community investments in the city’s children and fiscal future.

Villegas, who is a longtime Sheriff Department Special Officer in his day job with the County of Orange, has characterized the raises as irresponsible from the council dais, given the city budget reality despite his support of law enforcement and close relationships in the field.

“My vote speaks for itself,” said Villegas, who generally declined comment.

Both Villegas and Iglesias now look to be facing a recall, which is believed to be backed by people connected to the police union.

“I love the fact that this Latina has gotten the establishment scared,” said Orange County Republican Party Chairman Fred Whitaker, who has been tracking the controversy in Santa Ana.

Whitaker said Republican leaders would stand strongly behind Iglesias in defending any recall saying, “we will definitely come to her defense.”

He also noted that the OC GOP is really excited to see strong conservative leaders such as Iglesias and Villegas, who until 2016 registered to vote as a Republican, emerging from the Latino community. Whitaker added that one of his goals is to get more Latinos, like Villegas, to come back to the party.

The current debate in Santa Ana says a lot about the two parties, Whitaker said.

“To me, the Democrats answer is always more spending,” Whitaker said.

Orange County Democrat Party Chairwoman Ada Briceño didn’t have much comment about Santa Ana other than to say party leaders were monitoring the situation.

Both Iglesias and Villegas insist that ultimately, the answers for Santa Ana have to come from city residents not political parties or politicians.

“We’re in a fiscal crisis,” Iglesias said. “And it’s not because we don’t have enough money. It’s because we don’t spend it the right way. There is a lack of urgency on things that need to be done for the city that benefit our residents.”