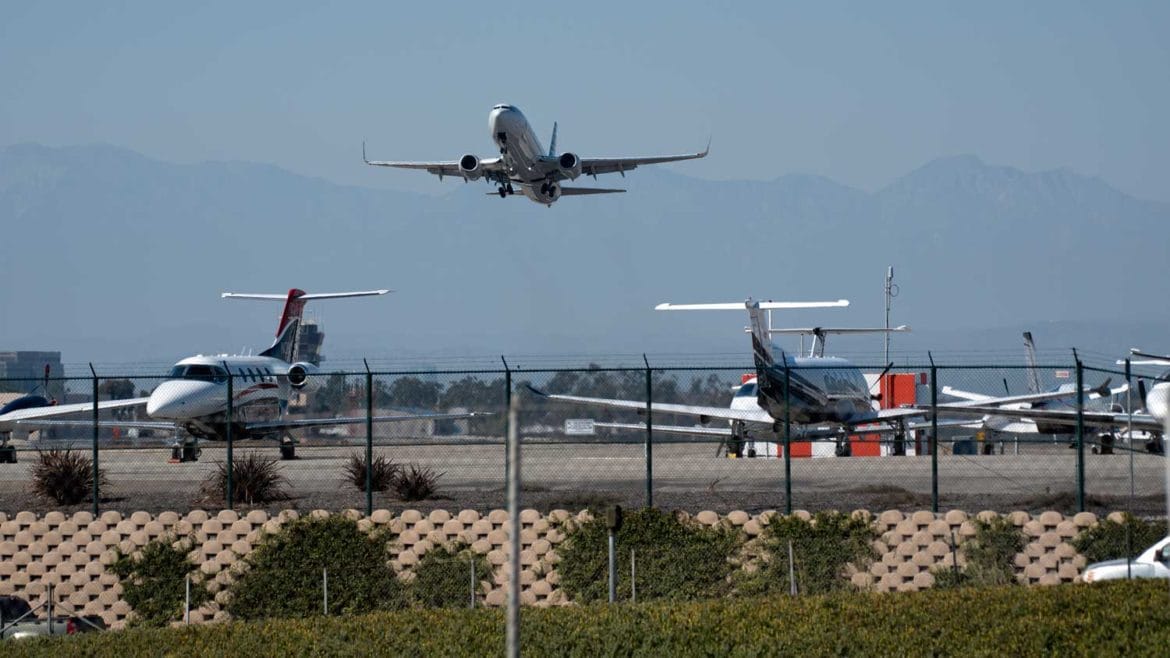 A passenger plane takes off from John Wayne Airport in Santa Ana in 2017.

Yet it’s a for-sure that approving the controversial plan will trigger more campaign cash for county supervisors.

That, along with the ongoing gentrification of JWA, is the real driving factor behind the effort to expand private jet hangars at the airport, which straddles the Santa Ana/Newport Beach/Costa Mesa border.

Just like the small boats getting the squeeze over at Dana Point harbor in favor of big yachts in the county harbor revitalization plan or the horse stables at the fairgrounds getting switched out for more parking in the OC Fair and Event Center Master Facilities Plan, small planes seem on their way out at JWA, getting swapped out for executive jets in the latest general aviation improvement program.

It may be an odd site to see an affluent community, possibly America’s most Republican zip code, protesting gentrification but Newport Beach residents are smart enough to understand that their quality of life is getting auctioned off to the highest bidder.

This past week, an overflow crowd of residents, numbering in the hundreds turned out to the county airport commission, with nearly three dozen public speakers engaging officials, most opposing hangar expansion plans. 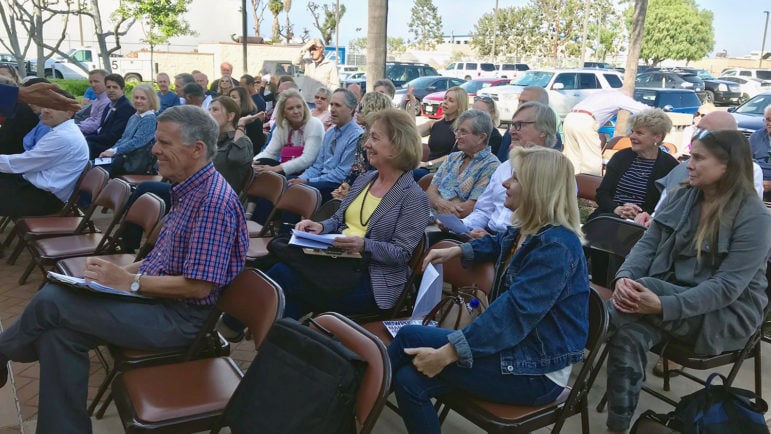 Residents attending the May 1 Airport Commission meeting overflowed to outside seating.

“We’re just getting slammed,” said Newport Beach resident and homeowner Sue Dvorak, who is working with a mounting tide of local residents organized around the group, Citizens against Airport Noise and Pollution (CAMP), against private jet expansion.

“This wasn’t a planned airport,” said Dvorak, who argues that the environmental impacts of the airport on the nearby neighborhoods or Back Bay aren’t adequately understood. “It just grew over time. It’s insane to have this huge commercial airport over a neighborhood.”

The draft Environmental Impact Report (EIR) prepared for the aviation improvement program does point to existing contamination issues from private jet operators at JWA that taxpayers have had to pay to clean up in the recent past.

The EIR notes, “Two locations on the Airport are associated with historic contamination. In the late 1980s and early 1990s, multiple JWA FBO (Fixed Based Operator) tenants with jet fuel tanks at the old fuel farm declared bankruptcy and left JWA to clean up releases of jet fuel to the soil and groundwater.”

Those clean up efforts are still ongoing, according to the EIR.

Neighbors are also waking up to what seems like louder and louder jet traffic at JWA, Dvorak said, which is fueling organizing efforts.

Residents feel that county officials aren’t looking out for their best interests. 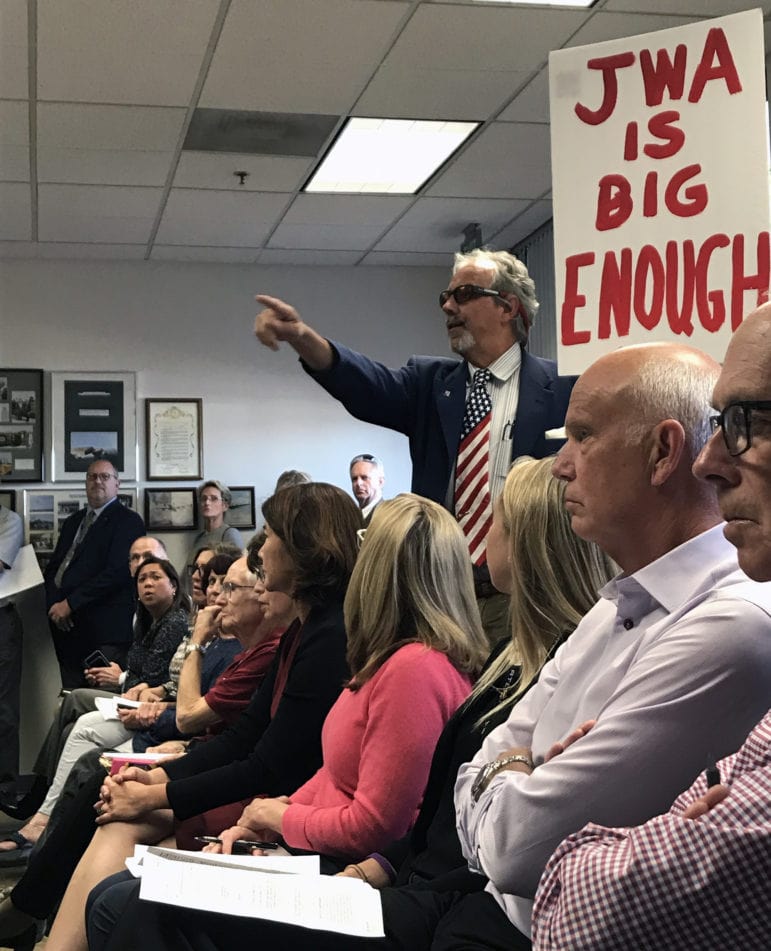 A resident pushes back against expansion of John Wayne Airport.

“They are trying to spin thing as if it’s complying with FAA,” Dvorak said, “but they’re going way, way, way beyond what the FAA wants them to do.”

On Tuesday, the battle comes before the Orange County Board of Supervisors – now featuring a full dais of elected supervisors for the first time in months.

Airport commissioners last week deadlocked, 2-2 on a series of motions attempting to craft a compromise between just updating hangar buildings and areas to FAA standards and expanding operations for private jets.

They ended up not making any recommendation.

The airport impacts communities most directly in the First, Second and Third Supervisorial Districts.

Orange County supervisors first seemingly awoke to the private jet business back in 2017 when the lease for a private jet operation came up and tons of campaign cash was connected to new approvals.

Ultimately, county supervisors granted the lease to a firm that was ranked fifth out of six by the county’s evaluation panel.

The winning fifth-ranked company, ACI Jet, and its supporters spent twice as much in political campaign contributions to supervisors as the first-ranked company, Signature Flight Support, according to a Voice of OC review of campaign filings for the months leading up to the February decision.

The Voice of OC review of campaign filings found that supervisors collected thousands of dollars in contributions from people who work or advocate for the companies vying for the lease.

As the lease decision was approaching in the second half of 2017, ACI and its supporters outspent Signature by 2-to-1 in contributions to supervisors, records show.

County Supervisor Andrew Do received $1,900 from ACI supporters and $250 from Signature supporters.

Supervisors’ Chairwoman Lisa Bartlett – the only no vote against choosing ACI – received $500 from ACI supporters and $1,250 from Signature supporters.”

A federal complaint filed by Signature Flight Support after the contract vote alleged Orange County supervisors were biased in favor of their campaign donors and violated federal requirements for airport contracting when they chose the company that was ranked fifth for a major lease at JWA.

“Through the [bidding process], it was determined that Signature was the most qualified firm and awarding a lease to Signature would be most advantageous to the Airport,” Signature wrote in its complaint.

The Board of [Supervisors] disregarded this finding and instead awarded the lease to ACI Jet because of the Board’s bias towards its campaign donors.”

The complaint cited over $23,000 in contributions to supervisors’ campaigns in recent years from people connected to the ACI Jet contract.

The influx in campaign cash came around the same time that the general aviation improvement plan got going at JWA to expand private jets.

Local residents have noticed the nexis, with several calling it out during last week’s public comment period at the county airport commission.

“We would love to get some full disclosure of how many of these proposed FBO’s (Fixed Based Operators) are donors to the supervisors?” said Ron Weinstein, President of Dover Shores Homeowners association, one of many local HOAs that have rallied against the private jet expansion plan.

Maybe on Tuesday, county supervisors can update residents from the dais.

Correction: An earlier version of this story incorrectly listed airport commissioners by supervisorial district. We regret the error.