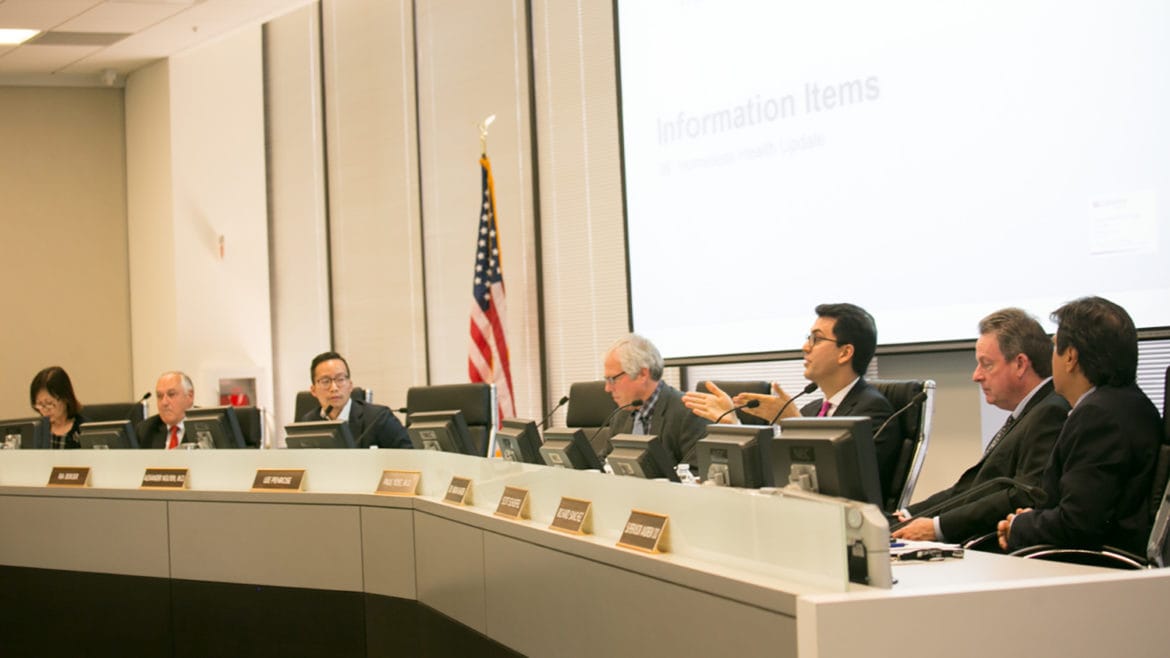 The CalOptima Board of Directors meets on June 6, 2019.

There could be 10,000 homeless people in Orange County who are CalOptima members, according to the agency, which is responsible for administering health insurance to the poor and needy in OC.

During the homelessness update at Thursday’s CalOptima board meeting, Chief Medical Officer David Ramirez, said the federally mandated biennial Point in Time Count is only a snapshot of homeless on one day.

“In this situation, we looked at the past 12 months, instead of just one point in time. And then we also used a variety of criteria,” Ramirez told the nine-member board.

Ramirez said CalOptima determined its members were homeless if they lacked an address, or are using a homeless shelter address. CalOptima worked with various homeless service providers, like Illumination Foundation to incorporate their counts. The agency was also able to gather information from member’s medical claims to determine if they were homeless.

“We found using that methodology, approximately 10,000 CalOptima members are homeless,” he said, adding agency has “high confidence” in the count.

The information prompted questions from Supervisor Michelle Steel and OC Healthcare Agency Director Richard Sanchez. Both sit on the CalOptima Board of Directors, but Sanchez is a non-voting member.

Steel asked Ramirez how CalOptima’s number was higher than the Point in Time Count.

Ramirez said the agency defined homelessness above the threshold used by the U.S. Department of Housing and Urban Development’s (HUD).

HUD classifies someone as homeless if they’re sleeping outside or in a place “not meant for human habitation,” living in a shelter, or has been living in an “existing institution” for 90 days or less after staying at an emergency shelter or living outside.

The Point in Time count uses HUD’s homelessness definition as guidelines when it conducts its count. The PIT count largely doesn’t include people who bounce between friend’s and family’s houses, known as “couch surfing.”

“What we were trying to do is be a little bit more inclusive in CalOptima’s definition,” Ramirez said.

“Are you coordinating these numbers with the County, because this is the first time I heard (of the numbers),” Steel said. “We need more information on how you got it … we do a lot of double work … so we are actually wasting money doing double, triple work.”

She added CalOptima should be working with County homeless service coordinator Susan Price and the Health Care Agency.

“This is the first time i’ve seen this data as well,” Sanchez said. “Is this information brand new? Or is it something that CalOptima’s known for a while?”

Ramirez said the agency has known about it for “several weeks.”

Board member Ron DiLuigi, a former Healthcare Agency director, said CalOptima needs to strengthen its working relationship with the County.

“If the County and CalOptima are not-hand-in-glove, and we’re currently not, we’re going to be in deep trouble in terms of ability to do our job,” DiLuigi said. “We can sit here and talk about this stuff, but we really have to walk the talk.”

CalOptima started implementing medical street teams in April to help treat the homeless people where they live and try to get them to visit health clinics partnered with the agency for continued medical treatment.

Board member Nikan Khatibi, a medical doctor, took issue with the way the agency was handling the street teams and healthcare for homeless people.

“I think it’s all a failure, if you ask me. I think if you want to move forward, you have to invest in clinical field teams, and also on a screening basis,” Khatibi said, adding that medically screening people will give the clinics information on what type of treatment homeless people need and the various clinics can take it from there.

He also said screening the homeless population first would help build a database of who wants medical help, as opposed to field teams hitting the streets in an attempt to immediately provide medical care.

Board chairman Paul Yost, also a medical doctor, said the agency had to quickly react to the increasing number of homeless people dying on the streets and CalOptima is learning as it goes.

“We were faced with an initial crisis with the number of people dying and without an immediate home,” Yost told Khatibi. “Our response was to reach out in some way. I agree with you it’s not the most efficient use of resources,” but something had to be done.

During public comment Father Dennis Kriz, who documented the 2018 homeless deaths when he published opinion pieces on Voice of OC, said he was glad an agency was finally starting to do something for homeless population without various roadblocks.

“Honestly, … in these past six months, you are the only ones where there’s any action I can see,” Kriz said.

Kriz, who runs a shelter at St. Philip Benizi church in Fullerton, has been critical on various homeless policies at the County and various cities.

“You guys are the only ones right now who seem to be moving without a great deal of NIMBY roadblocks and political roadblocks,” Kriz said. “I would encourage you to find ways to use the medical field to squeeze in housing.”

He then told the board, which has three medical doctors on it, “find a way to prescribe housing.”