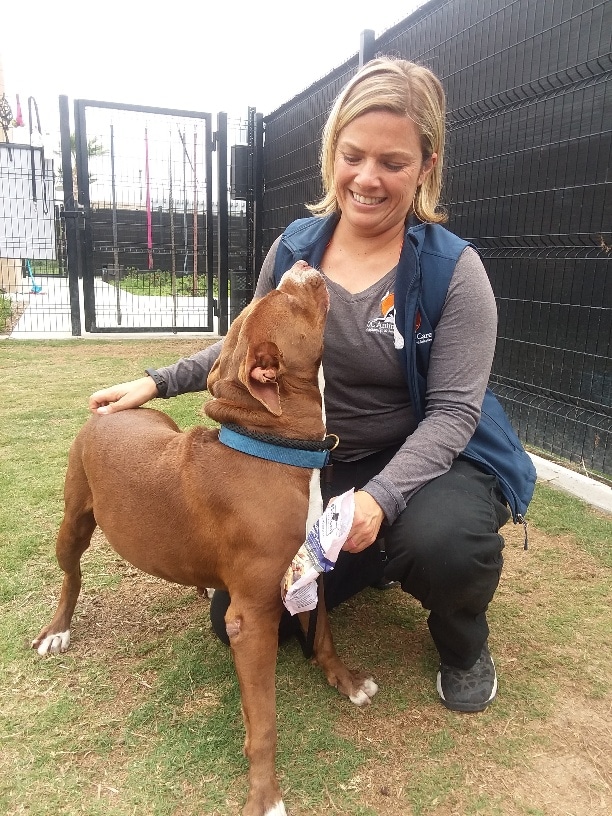 The new Orange County animal shelter, located in Tustin has been up and running since March 2018. However, necessary new management of this new facility was not in place until August 2018. Ten months in, I decided to check on the progress and found the shelter over capacity.

With the recent animal neglect case concerning the 140 dogs found in one home in the city of Orange plus the unprecedented number of kittens, the shelter was over capacity and very busy.  The call went out for help. See Supervisor Lisa Bartlett’s public service announcement here (which I additionally forwarded to all city managers of the contract cities).

First, a little history, after multiple OC Grand Jury Reports, lawsuits and resident complaints about the old facilities and shelter management, JVR Shelter Strategies group was awarded county contract to review the shelter’s policies and facilities and make recommendations prior to the opening of the new county animal shelter in Tustin.  Here is their report issued in December 2017.

Subsequently, a Strategic Plan, seen here, was created by staff through consultation with JVR and approved by the Orange County Board of Supervisors prior to the hiring of new shelter director, Mike Kaviani, in August 2018.  In fact, Mr. Kaviani only accepted the position as it was in alignment with what he believed to be “best practices”, seen here.

The staff is now in process of testing elements of the Strategic Plan.  Animal relinquishments by the public are taken in by appointment only, unless there is an immediate safety concern for an animal or human. This allows better customer service. Liz Hueg, of the nonprofit OC Shelter Partners, works with the shelter to help responsible pet owners considering relinquishing their pet. 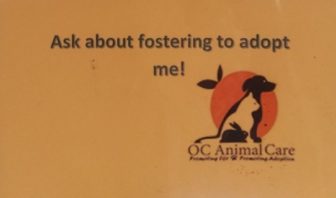 A new adoption method is now available for dogs when this sign is posted on their kennel. You may take the dog home overnight and longer, to determine if he/she is the right fit for you and your family. Ask at the shelter’s front desk for possibilities of other animals available for this Foster-To-Adopt program.

Daily “dogs playing for life” has been implemented which improves the dog’s behavior and ultimately helps him/her find a good home. You can watch this in action daily every morning, Monday through Friday at the shelter and/or learn more about the program here. Dogs are evaluated by a team consisting of field service officer, kennel supervisor and shelter community outreach member, and Kaviani if necessary. 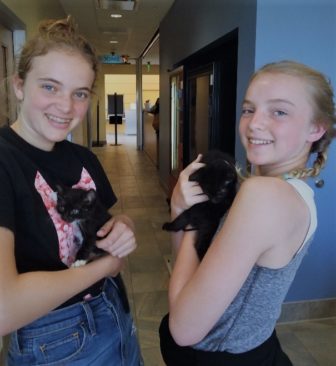 Carolina and Sophia picking up kittens at OCAC to foster

Due to the harsh criticism the county shelter has received over the years, every effort possible is now being made to save kittens, who at one time were always killed (and not even included in their euthanasia statistics) if they were less than 6 weeks old.

Prenatal kittens without their mother need to be bottle fed. The shelter is now asking for the community to help in this daunting endeavor by fostering the kittens who have no mothers.  Last reported, 1500 kittens (and growing everyday) were brought in by well-meaning good Samaritans, 400 more kittens than last year, 200 more adult cats than last year. Other shelters are experiencing more kittens than usual this year, too.  If you wish to foster some of these little “nuggets” as Public Education Officer, Brittany Hayes refers to them, just email [email protected] 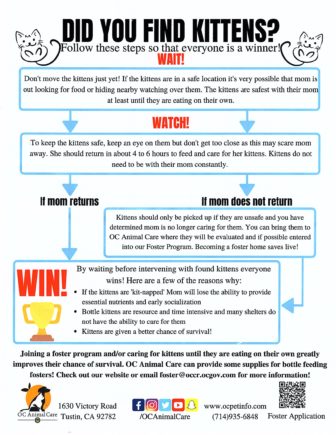 If you should come across kittens in your neighborhood, there are suggested steps to be taken. Don’t assume the kittens have been abandoned by their mother. Posted at shelter is Wait, Watch, Win. Kittens should only be picked up if they are unsafe and you have determined mom is no longer caring for them.

One new cat program increasingly gaining ground around the nation, but controversial, is RTF or Returned to Field. The thinking is that, if the cats found roaming are thriving, the most compassionate, lifesaving approach is to sterilize them, vaccinate them, ear-tip them and return them where they were found, OCAC policy #400.05. This approach grew out of community-based trap-neuter-return (TNR) programs, which have been in use for decades in many communities nationally.

According to industry sources, only about 2 to 5 percent of pet cats are reunited with their guardians through the shelter system.  Cats usually don’t do well in shelters, may experience illness brought on by stress and then euthanized.  What do I think about the RTF program?  I hate it! I’m one of those people who believes cats should be kept indoors for safety sake, or if possible, in an outdoor enclosure. But obviously there are people who disagree and caused this program to become necessary. This is why organizations such as ASPCA, Maddie’s Fund, Best Friends Animal Society, Stray Cat Alliance and the Humane Society of the U.S. are adding return-to-field philosophy to their “tools” for managing community cats, as a way of saving lives and (of most importance to politicians) being cost effective. However, the RTF policy #400.05 at county shelter is still in a draft form and may be modified. Every shelter will implement it differently. Kaviani plans to change protocol at our county shelter during nonpeak season and if capacity is at 75% or less, cats considered social and friendly will not be entered the RTF program.

The county had but one veterinarian on staff for far too long, partially due to the low rate of pay failing to attract qualified doctors. Fortunately, now interviews are underway for one additional staff veterinarian. Five community vets also contract with the county and rotate to assure consistent coverage every day. Consider this shelter serves 14 cities and all the unincorporated sections of the county, somewhere around 2 million residents.

A shout-out of gratitude goes to Anaheim Ducks Foundation for donation of funds and a mini-van which will go to help defray costs of feeding, sheltering and caring for the animals and enhance shelter’s ability to transport animals and materials to community and educational events throughout County. Through their Foundation, the Anaheim Ducks look to support exemplary Southern California nonprofit organizations and to help make a positive impact in the local community.

They (shelter staff and volunteers) “have been working their tails off (pun intended) to implement the Strategic Plan” says Kaviani. In response to my question as to what the shelter would appreciate from the community, he indicated the following…. to visit and adopt, fosters for kittens and more consistent rescue groups which could be an outlet for long-stay animals, dogs with behavior issues and older cats with medical issues.

I would like to see all the animal shelters in Orange County work together to collaborate and engage the community to save more animals and be a “light” in California which currently is 2nd to Texas in killing the most animals in the U.S. Collectively, we can be more successful. 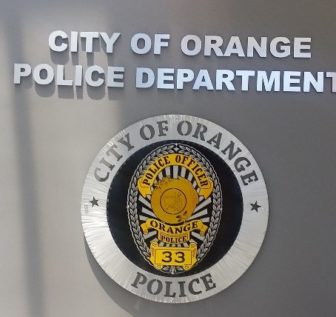 Regarding the animal neglect/hoarding case mentioned above, some of the dogs are now available for adoption. If you wish to adopt any of these rescued Shih Tzu dogs, you may visit the shelter website and fill out an application beginning today at noon. The remaining dogs will be available “in the near future,” states OC Board of Supervisor Lisa Bartlett.  The dogs, sentient beings, were found in deplorable conditions in a large gated home, in a gated community in the City of Orange. The initial alert call was received by City of Orange Police Department on May 30 which is in partnership with the shelter field unit and the Orange County District Attorney to investigate. The dogs were taken to the Orange County Animal Shelter.  In referring to the shelter field personnel, City of Orange Sgt. McMullin stated, “They are our heroes.”

We taxpayers and animal lovers are confident Orange County District Attorney and former OC Supervisor, Todd Spitzer, will see that justice is served expeditiously. A reminder if you see, or smell something, say something. It appears animal abuse can occur in any echelon of society.