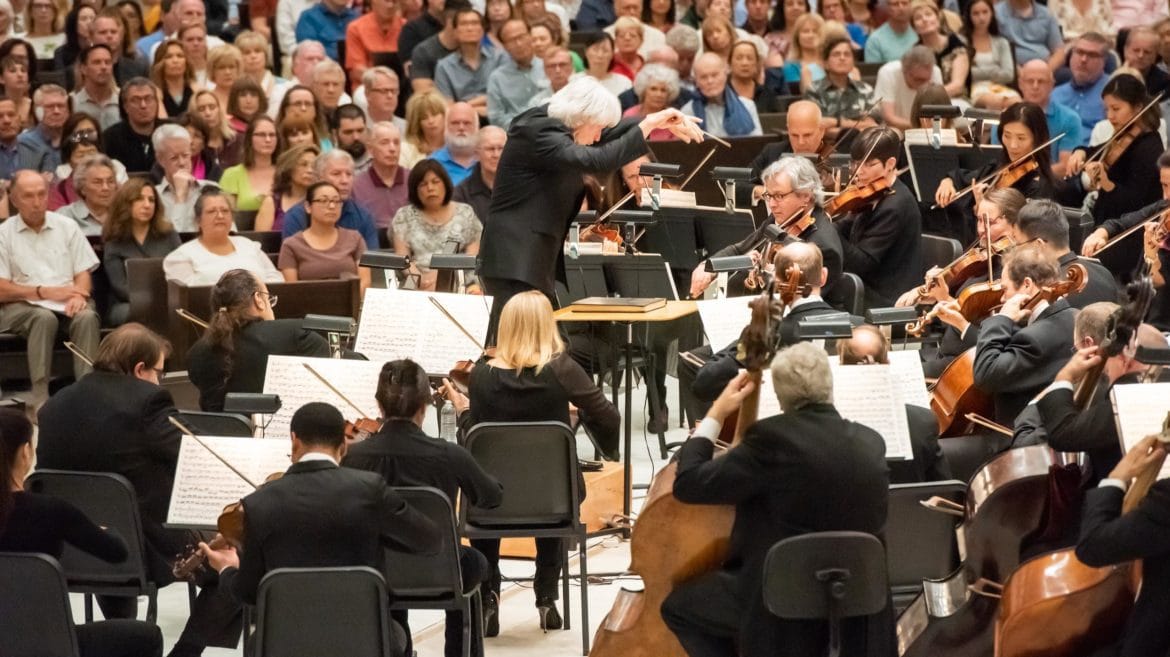 Carl St.Clair conducts the Pacific Symphony during its first public performance in the newly-renovated Christ Cathedral.

Conductor Carl St.Clair and the Pacific Symphony gave a not very satisfactory performance of Beethoven’s Ninth Symphony on Thursday at Christ Cathedral in Garden Grove. Blame it on multiple factors if you will, but the results were the same. Once known as the Crystal Cathedral, the facility was bought by the Catholic Church in 2012. It has recently gone through a $70-million-plus renovation and has been officially rededicated.

An ambitious series of concerts — Christ Cathedral Concerts — has been unveiled; Thursday’s performance was the second. Luckily, most of the other events in the series are for choral groups or solo organ. (The orchestra will play again at the Cathedral in January, with organist Paul Jacobs.)

The newly renovated interior of Christ Cathedral may be welcoming visually, but there was no indication to these ears that anyone gave much consideration to the acoustics, at least not as to their suitability for a symphony orchestra.

To put it briefly, these were cathedral acoustics: echoey, murky, swimmy, with a decay time of several seconds. Aurally, it was like playing in a high school gymnasium or Carlsbad Caverns. It’s no place for a couple of hundred musicians to perform an intricate piece of classical music. Lines were blurred. Balances were askew. Dynamics were limited. The thousands of notes reverberated around the room, warring in a riot of too much information.

I sat in the balcony, a level up from the musical proceedings. The sight lines weren’t good and the wooden pew felt as hard as a rock, designed for suffering. Smack dab in the middle of the orchestra, between the strings and woodwinds, sat the giant, square altar, covered in white and unignorable. Not ideal for a concert platform. 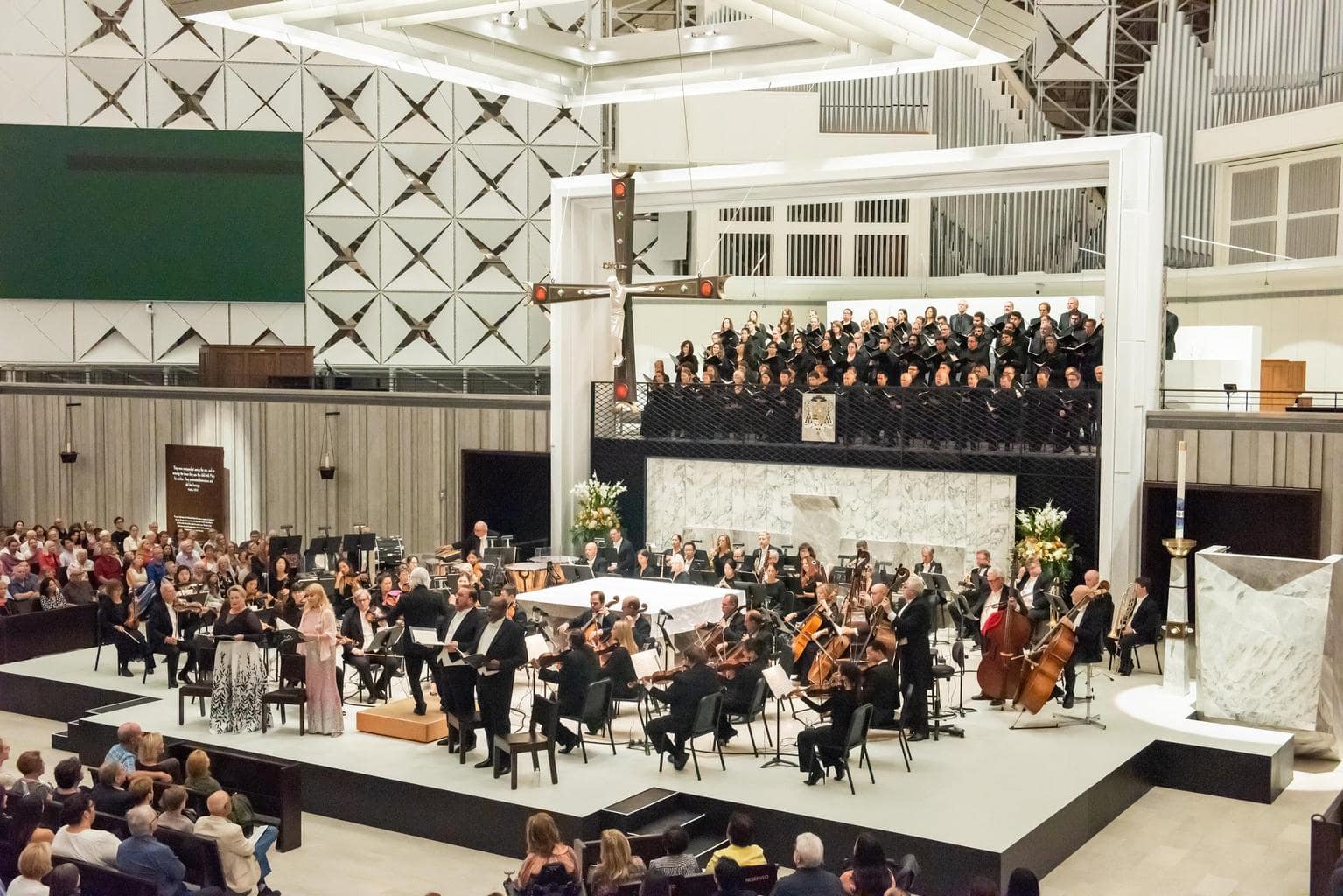 The Pacific Chorale and Pacific Symphony perform in the newly-renovated Christ Cathedral.

St.Clair, coming up on his 30th season with this orchestra, has probably performed Beethoven’s Ninth more than any other major work in his time here. The interpretation, solid and genuine, doesn’t seem to have changed much over the years. This was another rewind of it, for a new audience.

Perhaps that new audience was the main reason for the performance. Orange County has no dearth of good concert halls with excellent acoustics, including Segerstrom Concert Hall, the orchestra’s home (acoustics by Russell Johnson), the Soka Performing Arts Center and the Musco Center for the Arts (both with acoustics by Yasuhisa Toyota, the man behind Disney Hall). For anyone who hears this orchestra on a regular basis, it was a disappointment to hear them at the cathedral. But Thursday’s performance gathered a large, clap-happy throng of listeners, and they appeared enthusiastic in appreciation.

The opening of the first movement immediately revealed the acoustical challenges, a bright and not altogether pleasant sound with a long decay. When the strings played sixteenth notes they turned to mush. The woodwinds sounded in a slightly separate sphere, not mingled with the strings, which, with just 18 violins, 6 cellos, 6 violas and 4 double basses, generally presented on the thin side. This being the middle of summer, one noted a number of substitutes in the ranks and a missing concertmaster.

The scherzo, rhythms slurred, went along at an easy gait that seemed less than the Molto vivace suggested by Beethoven and failed to catch fire, though the timpani certainly supplied thunderbolts. The Adagio, one of the harder movements in Beethoven to pull off, emerged lulling and logy. So much of the beauty of this Adagio depends on clarity of texture and flowering timbres — it just didn’t have a chance in these acoustics.

There were some good points to the finale, and excitement if not ecstasy was achieved. Still, it was impossible to avoid the undistilled mess when all the performers, including the Pacific Chorale, were engaged. It sounded better all evening when fewer were playing at softer dynamics. The instrumental recitative, given the small number of basses, was crisp but underwhelming. The vocal quartet, not listed in the program (more on this below), consisted of Mary Wilson, Milena Kitic, Scott Ramsay and Kevin Deas; they were boomy but indistinct, lost in the hubbub. The Chorale powered through, sounding richest in quieter moments.

St.Clair did that thing he does wherein he slows down and slams on the brakes for the words “vor Gott” and holds the fermata forever. In the silence after it, many in the crowd applauded, thinking the end of something or other was at hand. I have never heard this happen in any performance not conducted by St.Clair, and it seems a mistake in timing on his part.

Last but not least, the program booklet was an abomination. In addition to omitting the soloists’ names, there was no program note on Beethoven’s Ninth whatsoever, even though there was plenty of room for histories of the Pacific Symphony, the Chorale and St.Clair. St.Clair provided a brief, spoken preamble but that was no substitute for a substantive written discussion of the piece. What’s more, no text of Schiller’s “Ode to Joy” was provided in either German or English, and no supertitles were projected. So unless you had your Schiller memorized, the finale lost a lot of its meaning. Phooey.