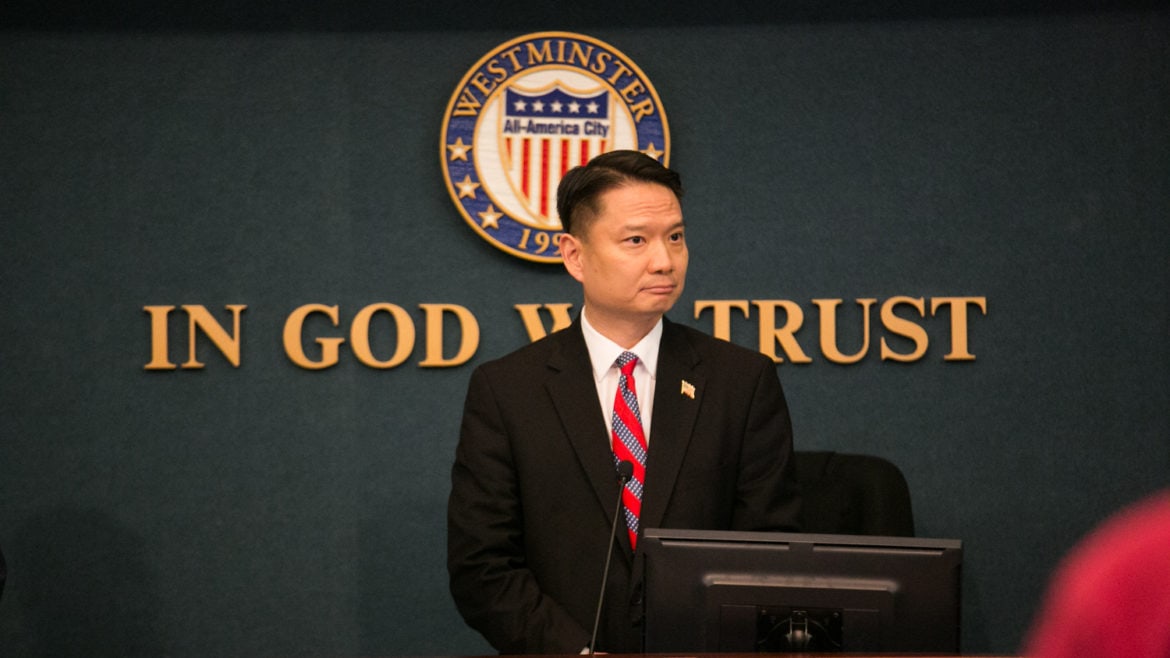 Westminster Mayor Tri Ta’s allegations that the Vietnamese government is disrupting City Hall are now part of an official city policy, despite critics’ claims it labels his political opponents “communists” in an attempt to turn Little Saigon against them.

The new policy says turmoil is mounting on the City Council since the last set of elections in 2018 because the Vietnamese government is allegedly working with unnamed people to spread misinformation and political disarray among the city’s residents, many of whom are Vietnamese Americans.

The City Council approved the resolution, which condemns any foreign influence in the city, at their Wednesday meeting. Ta and fellow majority faction council members Kimberly Ho and Charlie Nguyen voted in favor it.

Minority faction council members Sergio Contreras and Tai Do abstained from the vote.

The resolution provides no specific evidence of foreign interference throughout this year and says residents should “raise their voices” against anyone they suspect of stirring disorder in the city on behalf of Hanoi.

The ensuing arguments at Wednesday’s City Council meeting, combined with more than six months of fighting between two factions on the City Council, prompted city staff to drop a proposal later that night to reduce the frequency of public meetings from twice-a-month to once-a-month. Staff said fewer meetings would mean more time to review policies on council meeting agendas.

“With the political fighting back and forth that’s gone on for the past several months, it taints this item,” said City Manager Eddie Manfro, before he suggested pulling the proposal. “It wasn’t put on for any reason like that, but I can see that as the appearance of that.”

Council members later that night also directed staff to come back at a future meeting with a possible 12-year term limits policy – with no possibility of people returning to the Council after they’re termed out — which would have to go before voters in a ballot measure. That vote was 4-1, with Do opposed. He supported a policy that would allow people to come back a few years after terming out.

He defended his policy during the meeting, telling Contreras, Do and critics in the audience that if they don’t identify with the resolution’s descriptions of suspected foreign agents in the city, “you have nothing to worry (about).”

Those furthering Hanoi’s alleged disruption campaign, according to Ta’s policy, are people who identify themselves as “community activists” and “independent journalists,” as well as people who have hosted internet websites and social media forums to “criticize and attack Vietnamese American community leaders and certain elected officials” and disseminate false information or ‘half-truths.’”

Contreras, the only non-Vietnamese member of the Council, called the resolution “vague and frankly downright scary in its potential scope.”

“Clearly it can be interpreted as a move to label a communist any member of the public who disagrees with the Mayor and the City Council majority,” he said before the vote.

Recall efforts are underway against all five City Council members, though the movement to unseat Ho, Nguyen and Ta – led by political group Westminster United – is closer to an election than the efforts to unseat Contreras and Do.

Do accused Ta before the vote of using the resolution to scare residents away from signing any of Westminster United’s petitions to recall the majority. Their efforts have gained the financial backing of Vietnamese American billionaire Kieu Hoang, who’s hired paid signature collectors and political consultant Dave Gilliard to assist the recall team.

“Whoever signs the petition is basically going against the majority of the City Council, and by definition of the resolution, they are going to be labeled as communists and should be registered with the State Department for working with Communist Vietnam,” Do said. “This is beyond belief.”

Nguyen said there’s “no explicit or implicit direct or indirect mention of these recall activities anywhere in this resolution,” adding “if there is any evidence” for Do’s claims, “then show it to me.”

Ho said while it’s unknown “who is really pulling the strings on all the inflammatory and false political rhetoric,” she understood Ta’s desire to “condemn such actions.”

“This resolution does not name an individual or individuals, and I would not have that.”

Westminster is widely considered the capital of the Vietnamese community outside Vietnam that’s “diametrically opposed to the Hanoi regime,” according to Ta’s policy. When North Vietnam defeated South Vietnam in 1975, thousands of South Vietnamese people fled to the U.S. and Little Saigon communities formed all around the country.

Ta and his supporters say Hanoi sees Orange County’s Little Saigon as a direct threat to the Communist Party of Vietnam’s regime, and that incidents of political disruption in the area have happened before.

The Vietnamese Embassy in Washington, D.C. did not respond to requests for comment. An FBI spokesman in Los Angeles said the agency can neither confirm nor deny any current investigation into foreign interference in Westminster. Officials at the U.S. State Department deferred questions about Westminster to the Department of Justice, which has not responded to requests for comment.

In 1987, the editor of Mai magazine – a prominent Vietnamese American publication – died in what police said was an intentional house fire in the Garden Grove section of Little Saigon. Vietnamese journalists told the Los Angeles Times that year the editor — Hoai Diep Tu – was possibly killed by anti-Communists upset at him for running an advertisement for an allegedly pro-Communist business.

In 1999, a Westminster video store drew protests in the city after hanging a photo of Ho Chi Minh — the late Vietnamese Communist leader who died in 1969 — and a Communist Vietnamese flag.

Ta said he came up with the resolution to unite the city, and “to demand the Hanoi regime stop its manipulation with all its misinformation and lies.” He said he started working on the policy “in April.”

The meeting drew nearly 20 public speakers who either supported or rejected Ta’s claims in English and Vietnamese.

Tony Bui, a vocal critic of Do for the last several months, said Do owes “the people of Westminster an apology” for a Facebook post he made on his official page reading “Westminster is officially now Ho Chi Minh City brought to you by Tri Ta, Kimberly Ho, and Chi (Charlie) Nguyen.”

Ho Chi Minh City, previously named Saigon, is a major city in south Vietnam, and is named after the late Communist revolutionary leader. During the Vietnam War, Saigon was the capital of South Vietnam.

Bui said the point of Ta’s resolution is to condemn a campaign of political misinformation that “has happened since Mr. Tai Do” took his Council seat.

“Before that, a couple years ago, everything was peaceful, and all of the people worked for the betterment of the city. Since you (got) here, you created turmoil and terror (in) our city.”

Tim Phan, a local activist for the Orange County Young Democrats, called Ta’s claims “ironic” when “the Mayor has supported a ballot initiative, which extends the Mayor’s term from two to four years in a city with no term limits for any city council member.”

“He has limited the ability of items to be placed on the agenda without the majority’s votes, and the mayor himself does not need to abide by his own rules,” he added.

Phan also noted the date, Wednesday, was exactly 18 years after the Sept. 11 attacks on the World Trade Center in New York City.

“A day where we’re supposed to be united,” Contreras said later that night.