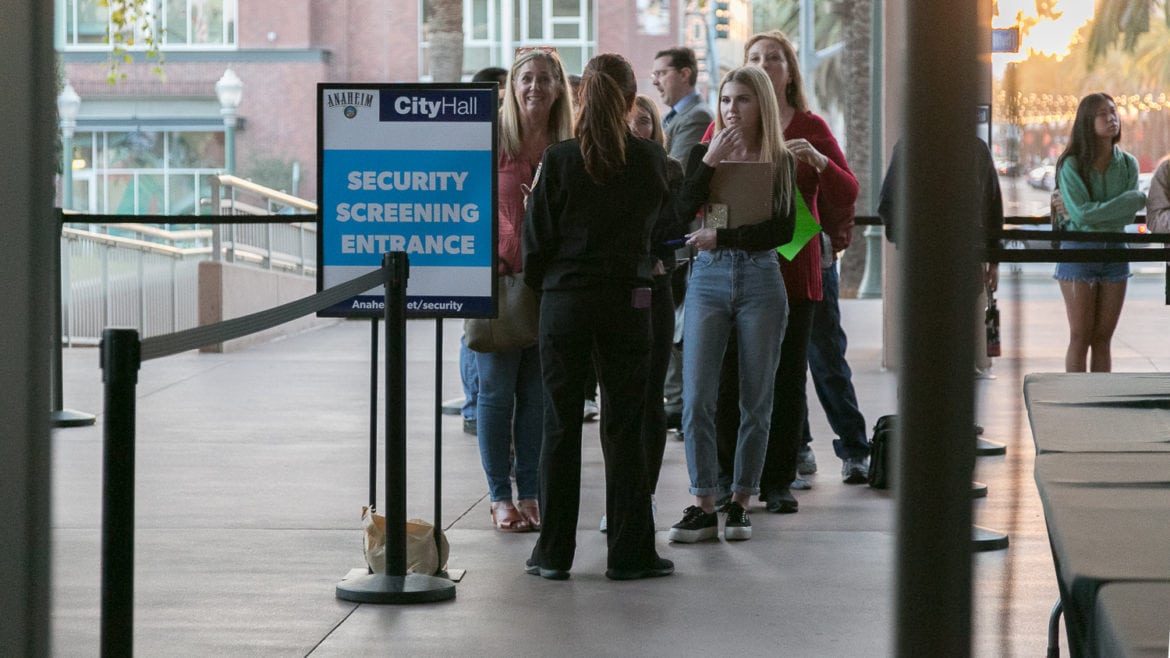 People now have to walk through metal detectors and get their bags searched before going to Anaheim City Council meetings, an effort that began just after the City Council began limiting debate and preparing for a fast-track public consideration of the billion dollar Angels stadium deal next month.

During the past two meetings, Nov. 5 and 19, at least four police officers also flanked the security lines as residents lined up to get inside the Council Chambers before the start of meetings.

“I think it’s coincidence. But again, it certainly isn’t helpful when the City Council is, in fact, taking action to suppress the voice of residents, the voice of districts and neighborhoods in our city. So I think that’s why it kind of starts to piece together for people that city hall isn’t necessarily open for the public and the petitioning of its government,” Moreno told Voice of OC.

Although he did say he understands the for increased security at city hall for city employees.

The move prompted criticism from some residents who said the decision is linked to the Council majority’s failure to respond to community issues.

“First of all, let me say the security is way too much out there. Cut it in half, make it quicker, respect civil liberties and stop criminalizing our communities. This is a deterrent. Who signed for this? City manager apparently? Who told him to do it, was it you Mr. Mayor (Harry Sidhu)? Unbelievable,” said resident Joese Hernandez at the Oct. 29 meeting.

”I must say, this has been quite a clown show the past few meetings,” said resident Pat Davis at that meeting. “And the security overkill out front looks to me like costly fear mongering.”

Although the increased security measures are intended to be implemented on a daily basis, it looks like the screenings will only be during Council meetings for the foreseeable future.

“We are focused on implementing the screening at City Council meetings right now,” said spokeswoman Lauren Gold in an email responding to questions about when residents can expect daily security screenings at city hall.

According to city officials, the city hired nine new security guards to operate the metal detectors and conduct bag searches at roughly $1,800 each meeting, depending on how long the meeting runs.

The measures were first launched at the Oct. 29 meeting, but the metal detectors weren’t on and bags weren’t searched, according to a city news release. It was a “soft launch,” to prepare people for the metal detector screenings and bag searches, which started at the Nov. 5 City Council meeting.

At the Oct. 29 meeting, the City Council majority shelved four items many residents have been pushing the Council to vote on for months. Sidhu, along with the majority, decided they didn’t need to debate on rent control for seniors, just-cause evictions, releasing the Angel Stadium appraisal and allowing the public 30 days to review any final stadium proposal before voting on it.

Councilmembers Lucille Kring, Stephen Faessel and Trevor O’Neil joined Sidhu when he called to table the four items that night, which kills any discussion on them.

Seniors living at Rancho La Paz mobile home park have been pushing the City Council to adopt rent control for months because they faced rent increases after a new owner bought the park and had to raise the rent to cover his increased property tax. But the seniors argued he increased it much more than to just cover the $800,000 increase to the property tax. After five years, their rents will increase by roughly 80 percent.

“Security measures outside — I guess if I was putting people outta their houses, I’d be scared too,” said resident Kenneth Batiste during Tuesday’s meeting.

And at the Nov. 5 meeting, the first day the metal detectors and bag searches were implemented, the City Council voted to further restrict the Council minority’s ability to agendize policy items.

O’Neil proposed the item at the end of the Oct. 29 meeting, after the Council shelved the rent control and Angel Stadium items. Now, if a policy fails or doesn’t get agendized, it can’t be brought back for at least six months.

The new agenda-setting requirement bars Councilmembers from trying to agendize for at least six months a discussion if it doesn’t get support from two colleagues. The same six-month restriction also applies to “Council-initiated agenda items that the Council has considered or taken action on at a meeting (Including, but not limited to, by voting on, postponing or tabling) …”

O’Neil, Kring, Faessel and Sidhu voted to further restrict the agenda-setting policy, which doesn’t apply to the mayor.

Public outrage at the City Council meetings has been increasing all year, beginning January with Sidhu’s sweeping changes to the public comment structure, agenda-setting requirements and board appointments. Although Sidhu can still agendize items without council support, councilmembers need the support of at least two of their colleagues to put an item on the agenda.

Frustrated voices also have been building over the year at the public comment podium, especially after the City Council refused to discuss the Rancho La Paz mobile home rent issue and Angel Stadium items. Although it did vote to implement a safety net to provide a rent subsidy for all Anaheim seniors, the program isn’t expected to kick in until next year.

The security screening wasn’t voted on by the City Council and instead stems from a recommendation from the city manager, police chief, fire chief and other department executives.

“It’s hard to argue against these things, because, again, if something happened, then you’d feel horrible,” Moreno said. “It’s kind of like insurance. You may not be able to afford insurance, but you pay for it. Because if you don’t pay for it, god forbids something happens.”