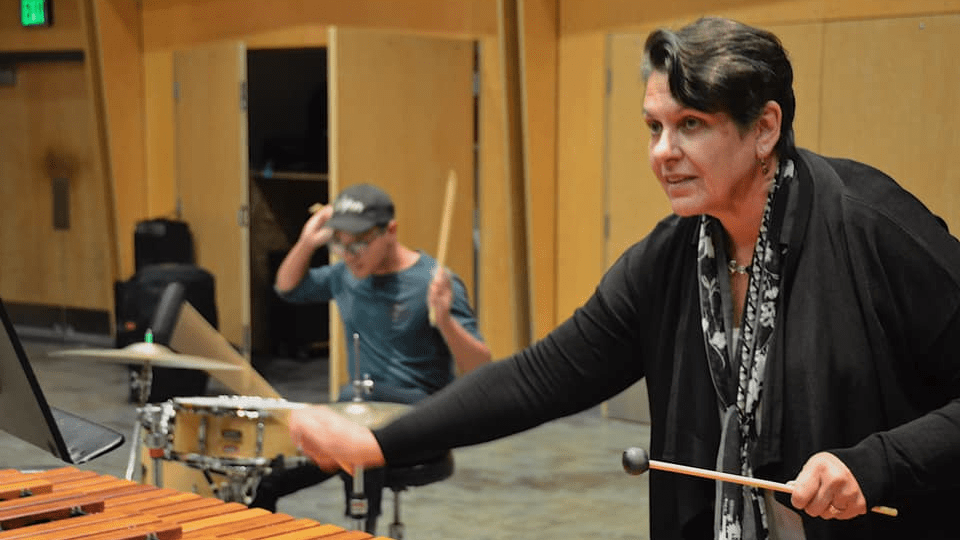 A Schedule of Madsen’s Upcoming Premiers

‘Earth Horizon’ – To be premiered by CSUF New Music Ensemble

I. Country of Lost Borders
II. The Consecrating Mother

III. Journey to the Land of the Moon
IV. Medicine Wheel
V. Coyote on Holy Mesa

When Pamela Madsen was a young student musician, times were different. “You listened to certain repertoire, played certain pieces, composed a certain way and stayed in your camp,” said Madsen, an accomplished composer who teaches at California State University, Fullerton. “At my undergraduate school, Indiana University, you had to choose one thing to specialize in,” Madsen recalled. “I wanted to major in both composition and piano, and that just wasn’t allowed at that time.”

Madsen has spent her career pushing boundaries, expanding her horizons, and working hard to make music that matters and comments directly on the state of the world. Those goals inspired her to write the most significant work of her career, a multi-part piece called Oratorio for the Earth, which will debut in several concerts over the next few months, here in Orange County and elsewhere.

Oratorio for the Earth is ambitious in theme as well as length. It addresses the importance of listening deeply to nature and communing with the wilderness, but its deeper themes are more urgent: Madsen’s obsessions include the ongoing struggle for social justice, the primal relationship of our bodies to the earth, and the unseen bonds that interconnect humanity. Oratorio for the Earth employs spoken-word and sung text, field recordings of sounds in nature, traditional instruments, electronics and video.

The themes of her oratorio are not new to the veteran composer.

“I’ve been working, often collaboratively, on things that have to do with the environment since 2000,” Madsen said. “I worked with Judy Chicago in Los Angeles on her ‘Envisioning the Future’ project.” (Chicago is a respected feminist artist, teacher and writer known for her large collaborative art installations that focus on birth and creation themes.) “I’ve also created a lot of pieces that have to do with the social change that music can bring. Those are just some of my concerns.”

Madsen said it’s her deep-seated need to comment on the state of the world that drives her to compose.

“I try to make my work really engage on more than one level. I always have to question why I’m composing, this need to be heard. The last thing I want to do is fill the world with more sounds that people don’t listen to. It’s beautiful, but is my music necessary? That’s a question I ask about my teaching, too.”

Social relevance wasn’t a quality taught in the academy when Madsen was young.

“I was trained to write extremely academic music. I can do that; I can write music that celebrates the inner workings of my mind. But I don’t put it out there in public unless it’s necessary. It must have something bigger to say.”

Madsen credits Pauline Oliveros as her principal mentor. When Madsen was a graduate student at the University of California, San Diego she studied with Oliveros, a pioneering avant-garde composer and teacher who developed a deep-listening philosophy based on principles of improvisation, electronic music, ritual, teaching and meditation. Madsen’s relationship with Oliveros lasted more than three decades until the latter’s death in 2016.

“As a young woman composer there weren’t very many role models for me,” Madsen said. “Pauline became one—not as someone who wanted me to follow in her footsteps, but in other ways. She supported and believed in me, and I would talk to her regularly. I also went on deep-listening retreats with her.”

Madsen is director of the CSUF New Music Ensemble and she often debuts her work on campus, drawing from the large talent pool of students and colleagues. “I often compose with specific performers in mind,” she said. 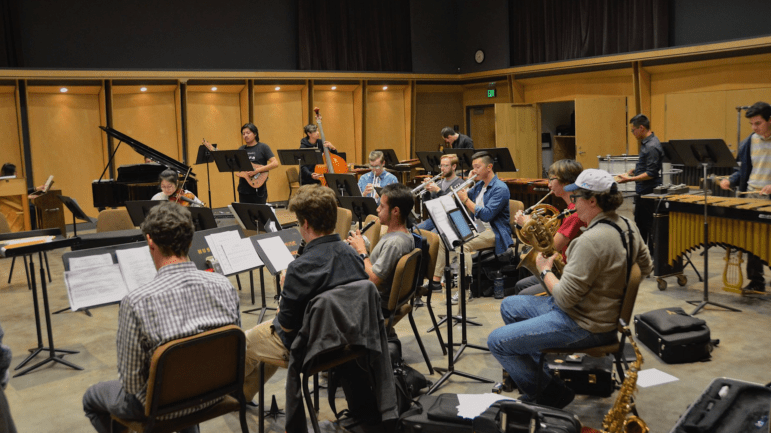 The CSUF New Music ensemble rehearses a piece by Pamela Madsen for an upcoming concert.

Madsen has other fascinating local affiliations as well. She has been partnering with Crystal Cove Conservancy as a featured composer since 2012. “It’s an inspiring place,” said Madsen, an avid hiker and backpacker. “It reminds me of the power and beauty of the natural world. For me, that’s where inspiration begins.”