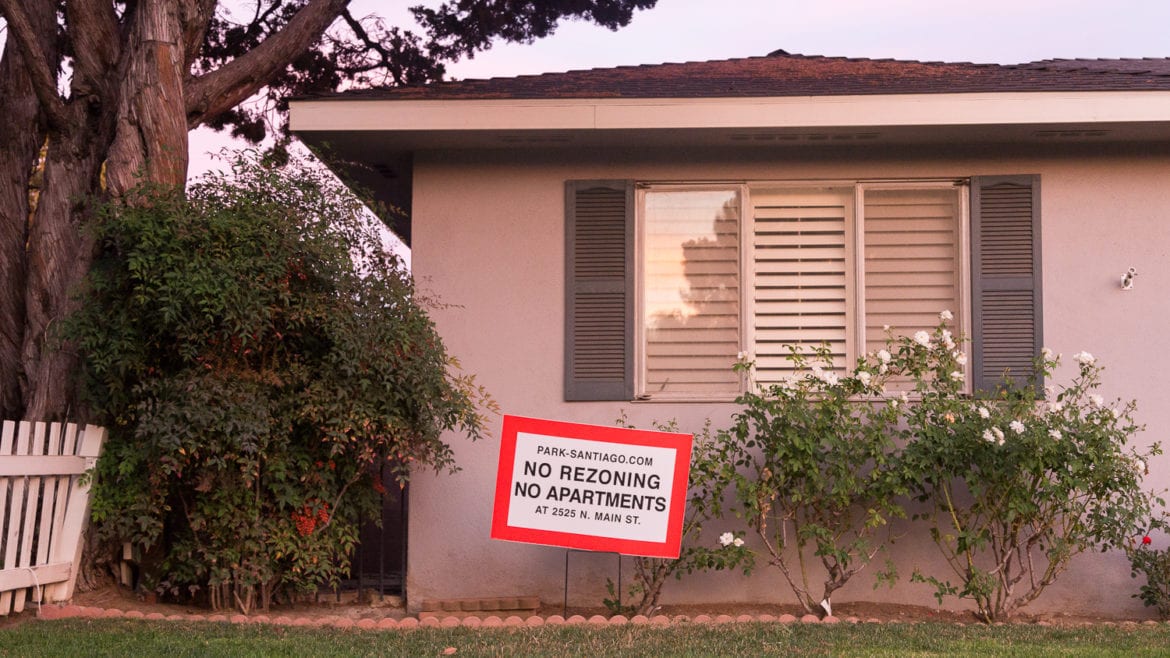 After several delays on final approval for one of Santa Ana’s most controversial apartment projects, City Council members this week were faced with two options: move forward with the developer against intense opposition by local homeowners, or let the voters decide on it in a ballot measure.

Council members initially approved the project last year, despite a push by some against the much-disputed 2525 N. Main St. apartments in the city’s north-end Park Santiago neighborhood. 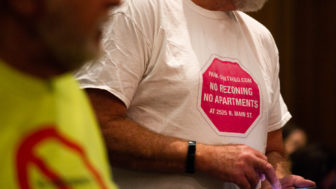 Shirts worn by residents opposing the 2525 development during a Nov. 19 City Council meeting.

Since then, it’s come back for its procedural second reading numerous times, which council members continued to push off until Tuesday, when they moved to finalize their approval of the project amid promises by the neighborhood to petition for their own referendum ballot measure and send the issue to voters in hopes of turning around the city’s decision.

So a referendum movement it will be, said Park Santiago resident and opposition leader Dale Helvig after the council vote.

“It’s not wrong for out-of-town developers to come in and want to build projects in Santa Ana, but I think it is wrong for them to come in and tell us what we should build,” Helvig said in public comment. 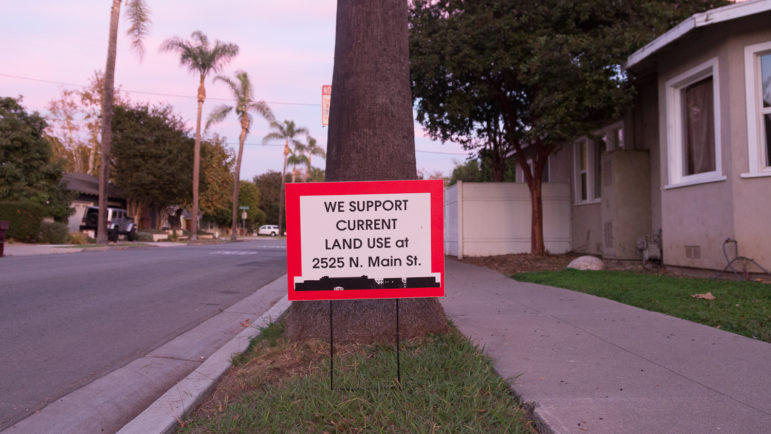 Residents won’t be able to get moving on a referendum petition until the city signs the ordinance the council approved Tuesday, which pushes through a zone change for the project and a development agreement between the city and the project’s developer, Ryan Ogulnick.

The project has become the center of an ongoing debate in Santa Ana over the role of developers in city politics.

At a council meeting in December, Councilman Juan Villegas publicly tied, without naming names, a person behind the 2525 project to the $320,000 in political contributions from undisclosed sources — also known as “dark money” — spent in the 2018 City Council elections. Villegas welcomed an interview with the FBI in the event of an investigation. 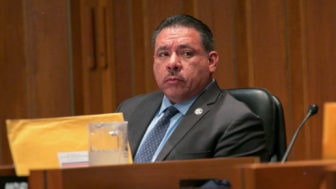 Ogulnick has repeatedly denied any involvement in the dark money campaign.

City staff say a special referendum election on the 2525 project could be held either in June, July or August this year. Staff estimate the total cost would be at least $650,000. An alternative would be to consolidate a referendum election with the November general election, which staff say would eliminate any cost to the city.

“The point of the lawsuit is that you have to have public input in the process. They have to be able to look at what you’re doing, look at all the alternatives and mitigation measures and come to you and provide their comments,” said SACRD’s attorney, Charles Krolikowski, who criticized a number of ways the city handled the issue, like making changes to the development agreement “on the fly.”

Almost all of the 28 Santa Ana residents who spoke in public comment voiced their opposition to the apartments for over an hour. Much of the night’s comments and heckling from the back of the chamber were directed at proponents for the project, like council members Ceci Iglesias and Jose Solorio.

“Send it to a referendum,” he added.

Solorio responded to the criticism before the vote, saying “It’s not always easy sitting up here.”

“Let’s try and do the right thing here in Santa Ana and be civil,” he said later. “Feel free to vote for me or against me in the next election, but let’s be civil.”

Solorio cited Regional Housing Needs Assessment numbers as one of the reasons he backed the development project.

“We’re being asked to build about 4,000 units in the next ten years. If this doesn’t get built here we’re going to need to replace it somewhere else,” Solorio said at the meeting.

“Go ask San Francisco,” he said, referring to a city with one of the most expensive housing markets in the country and a housing and homelessness crisis.

“I know a constituent emailed me last week asking me why I would support this project — I feel that it’s a good project for the city,” said Iglesias before the vote. “If it was a 300-unit project in my neighborhood, I would be ok with it. It’s a nice project.”

Mayor Miguel Pulido expressed his continuing opposition to the project, pointing to the numerous second readings and displays of protest as a sign that the issue should go to voters.

“When something is of this magnitude, this controversial involving so many people from different neighborhoods throughout the community,” he said, “maybe it is best for us to step back and let the voters decide.”

Hosam Elattar is a Voice of OC intern. Contact him at [email protected] or on Twitter @ElattarHosam.