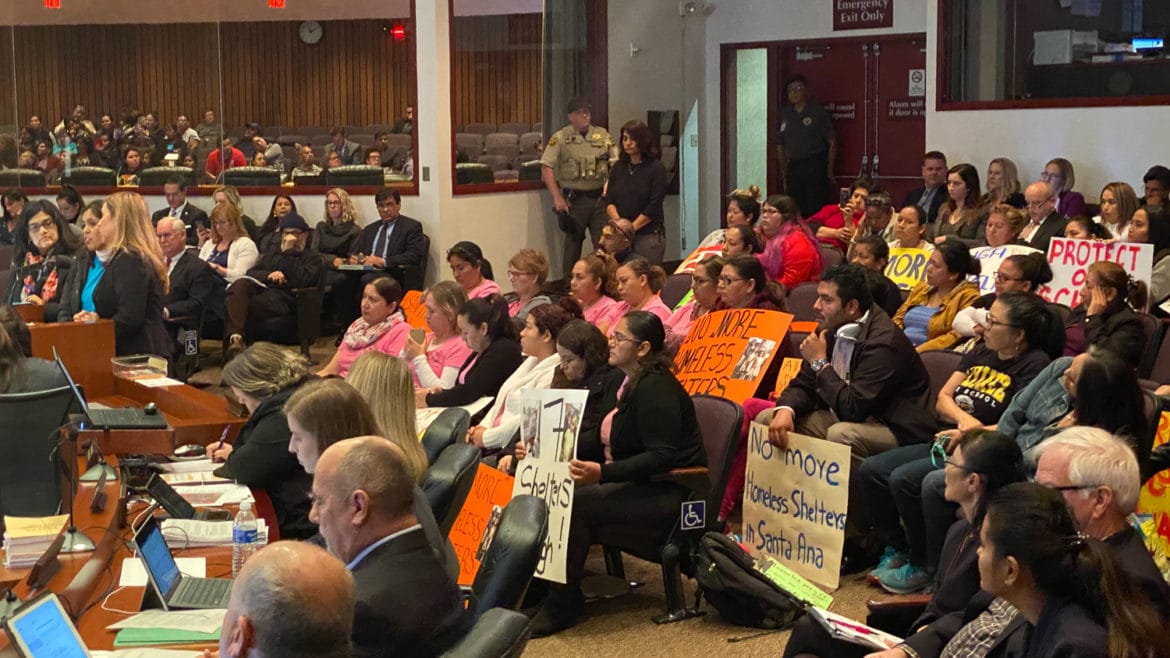 Santa Ana residents and school officials urged Orange County supervisors to reverse course on a proposed homeless shelter in the city at the supervisors' meeting on Tuesday, Jan. 28, 2020.

Santa Ana residents, angry and organized, sent a loud message this week: they’re tired of being the dumping ground of homeless people from across Orange County, and it’s past time for other areas – particularly in wealthier South County – to step up to the plate.

Parents, school officials, and students intensified their approach and flooded Tuesday’s meeting of Orange County supervisors, who have approved plans to move an existing 400-bed homeless shelter at a bus terminal in the Santa Ana Civic Center to a new 425-bed shelter under construction about a half-mile south of Kenneth E. Mitchell School, Godinez Fundamental High School, and Centennial Park.

Three dozen people spoke during public comments – all in opposition to the county’s plans – with many citing the existing concentration of homeless services in the city and saying Santa Ana children already are already exposed to needles on the streets and drug use while walking to school, as well as naked people wandering onto school campuses.

“The city of Santa Ana is not a dump where the other cities can come and give us what they don’t want, the homeless,” said Santa Ana resident Susan Lambaren.

The commenters said the county was moving forward with its Yale St. shelter plans without spreading the burden to south county cities that don’t host any shelter. And they criticized the county for not answering community questions at a public forum – in contrast to the forum county officials held in 2015 before building the Bridges at Kraemer shelter in northern Anaheim.

“I know you won’t care what we have to say, so long as your south county donors are happy. Just know that more Latinos are registering to vote than ever before. This year is election year.”

Supervisor Lisa Bartlett, who represents south county on the Board of Supervisors, was present for the comments calling on her part of the county to do more, but did not respond. 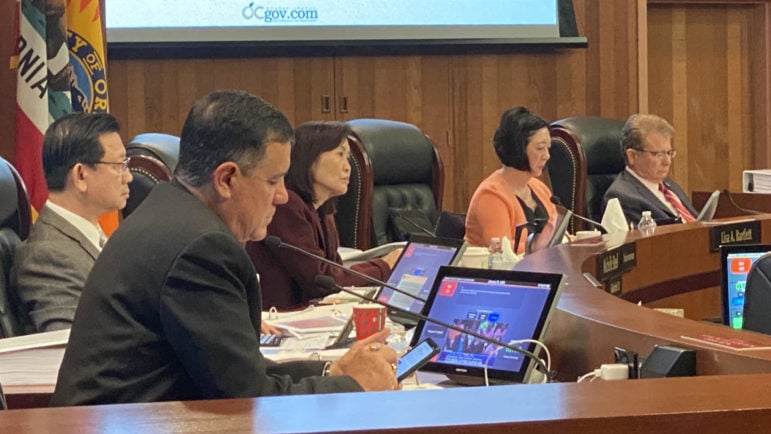 Orange County supervisors during public comments on Tuesday, Jan. 28, 2020 from a Santa Ana resident criticizing their plans to move a homeless shelter from Downtown Santa Ana to a new location in the city. From left: Andrew Do, Don Wagner, Michelle Steel, Lisa Bartlett, and Doug Chaffee.

Supervisor Andrew Do, whose 1st District includes Santa Ana and other central county cities, said the 425-bed Yale St. shelter would be a significant improvement from the existing 400-bed Courtyard shelter it’s replacing. And he said he’s held a series of 22 coffee meetings with neighborhood associations in Santa Ana, where the new shelter was discussed.

“The new way that we operate the [Yale] shelter, we do not have people walk in and out or ride up [on] their bike,” said Do, adding that the location was chosen by the city of Santa Ana.

“We will take steps to make sure that no one from outside of this area will be going there.”

Do pointed to maps that he said showed new shelter site would be better.

Maps provided by county officials of schools and other institutions within a half-mile radius of the existing Courtyard shelter in downtown Santa Ana (left) and the planned Yale shelter in the city (right) that would replace the Courtyard.

Seven schools are within a half-mile radius of the existing Courtyard shelter, as well as daycare centers, three community centers and two libraries, Do said. The new shelter, he said, would be primarily in an industrial area.

“So it’s important to understand that when you look at this map and you compare between the two locations, it is abundantly clear which one is better,” Do said.

Supervisor Doug Chaffee, who represents north Orange County, said cities in his district are stepping up by adding hundreds of new shelter beds. He said the county’s Yale shelter in Santa Ana should be limited to people who have proven connections to the city.

At the Fullerton cold-weather armory shelter, he said, people “must show some proof that you have a connection to the city. That’s what needs to happen here, you need to show the connection to Santa Ana.”

“If this shelter isn’t there, you may still find the homeless people are still there. so be aware of that, please,” Chaffee said, adding that people in his area were afraid of shelters at first.

“Now we want them, because they’re making our cities safer,” Chaffee said.

“We are by no means doing what the police call homeless dumping,” San Clemente Mayor Pro Tem Laura Ferguson said in an interview with Voice of OC last week.

Ferguson said that while San Clemente is by law allowed to transport homeless people to the county operated armory shelters in Santa Ana and Fullerton during the cold winter months, the city must arrange for their return.

The Orange County Sheriff’s Department, which patrols most of South County, transported homeless people to the county jail in Santa Ana 285 times during a 9.5-month period in 2017 and 2018, according to data released under the California Public Records Act.

Inmates are released in Santa Ana, and the department said it had no data of homeless people being transported back to the cities where they were picked up.

In Feb. 2018, sheriff’s deputies dropped off a man at the Courtyard shelter in Downtown Santa Ana whom shelter officials wouldn’t allow in because he was in an “agitated frame of mind,” according to Santa Ana police memos obtained by Voice of OC through the California Public Records Act.

One of the deputies told the man to “take care of your warrants,” according to the memos, and Santa Ana police responded after receiving calls about a person “running in and out of traffic and throwing things at people.”

The man was detained by Santa Ana police, with county health workers determining he was a danger to himself or others under California’s “5150” law, according to the memos.

Asked for comment, sheriff officials emphasized the incident was before a July 2019 settlement agreement that restricts how homeless people are transported.

“The Orange County Sheriff’s Department is part of the settlement agreement reached in July 2019 with Judge Carter that specifically prohibits the transportation of people experiencing homelessness outside of the Service Planning Area (SPA) where they are currently located,” Sheriff’s Department spokeswoman Carrie Braun said in a statement.

“This alleged incident was prior to the settlement agreement. In addition, Department policy now dictates that homeless individuals are not to be transported across SPA boundaries,” she added, referring to three county regions known as “service planning areas.”

“[The Sheriff’s Department] has taken a proactive approach to addressing homelessness through a balance of outreach and enforcement. We have a Homeless Outreach Team of 25 dedicated personnel with specialized training to connect homeless individuals with appropriate services and/or shelter and mitigate homelessness in our jurisdiction within the confines of the law,” Braun added.

“We are working collaboratively with cities and community partners to deal with homelessness proactively.”

Santa Ana Sues – and Pulls Back

Earlier this month, Santa Ana city officials sued the county and three South County cities in federal court, alleging they were violating the civil rights of Santa Ana residents by concentrating homeless services in the city.

But Santa Ana later dropped the cities – Dana Point, San Clemente and San Juan Capistrano – from the suit, saying the cities “have assured the City of Santa Ana in writing that they have not transported homeless individuals from their cities to Santa Ana and have no plans to do so.”

A hearing in the lawsuit is scheduled for Feb. 4 to be presided by U.S. District Judge David O. Carter, who warned city and county officials two years ago to stop dumping of homeless people in Santa Ana, or else they’d face a federal investigation and grand jury.

Anastasia Smith, chief of police for the Santa Ana School Police Department, told supervisors that her department has seen a 251 percent increase over the last two years in service calls related to homelessness on or near their campuses.

“I would argue that the largest group of stakeholders in Santa Ana have never been heard – the children, our most vulnerable constituents,” Smith said. “I ask that you all heed the words of Nelson Mandela when he said ‘the true character of a society is revealed in how it treats its children.’ ”

Many of the speakers at Tuesday’s supervisors meeting said others wanted to speak, but couldn’t, because county supervisors hold their meetings during normal business hours when many residents are working.

County plans call for the Yale St. shelter to open in early 2021.

Nick Gerda covers county government for Voice of OC. You can contact him at [email protected]