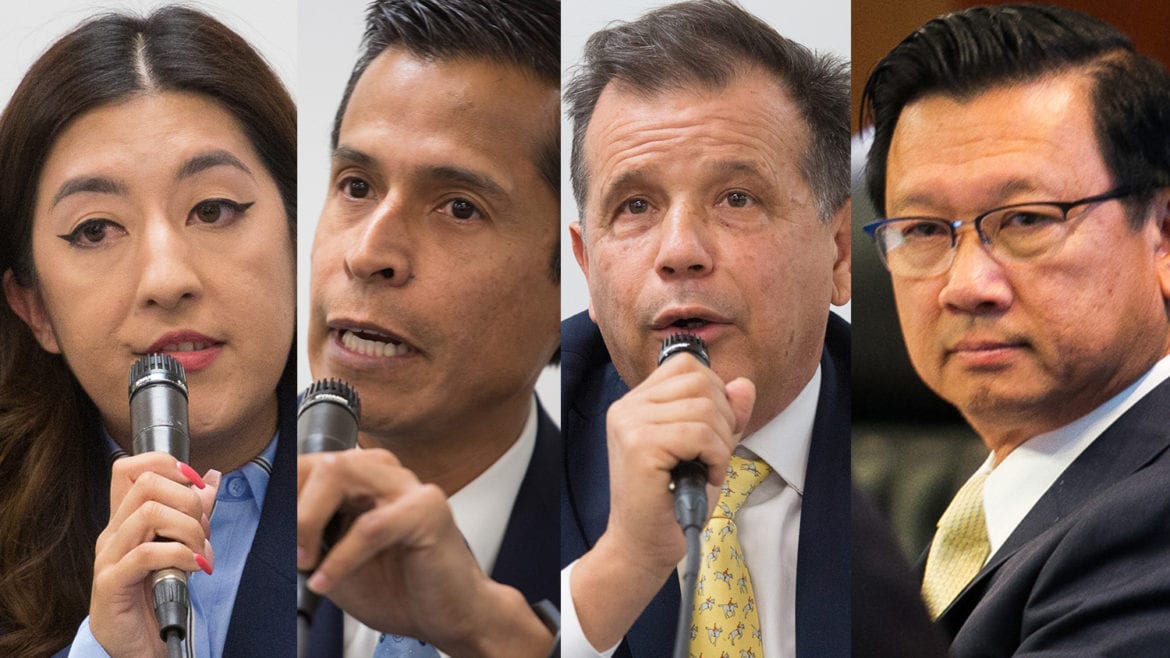 The candidates for 1st District OC supervisor in the March 2020 primary. From left to right: Kim Bernice Nguyen, Sergio Contreras, Miguel Pulido, and Andrew Do.

In one of the hottest local election battles of 2020, three Democrats are facing off with Republican Andrew Do for his supervisor’s seat in next week’s primary election.

Do is running on a campaign that he’s been solving homelessness and wants to continue doing so, while his Democratic challengers have said the county has failed to move fast enough to create affordable housing to get people off the streets.

The top two vote-getters will advance to a November runoff, in what’s considered one of the most competitive races in Orange County this year.

Do is facing the prospect of a tight re-election this year, with the Democratic voter registration advantage increasing from 14 percentage points the last time he ran, to nearly 20 points currently. He and Pulido also have faced corruption investigations in recent years.

Due to Do’s advantage of incumbency and large financial backing – as well as being the only Republican – the primary election is largely considered a race for which of the three Democrats will advance to face Do in the runoff.

Dominating spending on the race, by far, is the Orange County sheriff’s deputies’ union, which has spent over $430,000 on mailers and other ads supporting Do. Do voted last year for $151 million in raises for sheriff’s deputies, and moved $24 million from departments like the Health Care Agency to pay for sheriff cost overruns.

Other big spending has included $25,000 each to a committee funding ads for Pulido and against Do from the Santa Ana police officers union, billionaire George Argyros’ real estate firm Arnel Development, and developer Mike Harrah’s company Caribou Industries.

Keiu Hoang, a billionaire who lives near Ventura County and founded a medical services company, has also given $50,000 to the pro-Pulido, anti-Do committee.

Contreras’ support has been largely from individual small donors and labor unions, and Nguyen’s donors have mostly been small contributions from individuals.

All four candidates are citing homelessness as the top issue in their campaign, though their mailers have not offered a specific game-plan for how they plan to address the issue.

Voice of OC called all four candidates for interviews about their candidacy and vision Nguyen and Contreras did interviews, while Do and Pulido declined interview requests.

On homelessness, Nguyen and Contreras both said they would move faster to create permanent supportive housing for homeless people, and that they would try to work more closely with cities than Do.

“The county has to work with cities, and we have to figure out how to work together,” Contreras said. “My experience is [Do] hasn’t provided any support to Westminster. And I just really believe we need to do more to go after state funding and work with our state leaders” to obtain funding.

“I think the leadership thus far – from all levels – has been more so, ‘I control this, mind your business.’ And the response has been, ‘Well, then I don’t want to work with you,’” Nguyen said.

Nguyen said her “number one” objective as supervisor would be “actually showing up and being present, and taking the time to listen to residents’ needs and concerns.”

“I’m constantly advocating for more engagement and outreach in a way that actually is going to be more meaningful,” she said.

In a reflection of the competitive nature of the race, hundreds of thousands of dollars are being spent on mailers for Do, and to a lesser extent for Pulido. The sheriff’s deputies’ union has dwarfed all other spending with over $436,000 on ads for Do this month, according to public disclosures.

Nguyen and Contreras have contrasted themselves with the big money in the race.

“[My opponents all have a tremendous, significant amount of money in comparison to me,” said Nguyen, most of whose donations have been $150 or less. “I’m getting individual small-time donors. And that means there’s support within the district to have me there.”

Contreras, whose funding has largely come from small donors and labor unions, said he would fight for the working class.

“This is personal for me,” Contreras said, pointing to his father, who he said has been a janitor at Disneyland for the past 43 years. “It’s time for somebody to get up there and fight for working families.”

Corruption Claims and Investigations Surround Do and Pulido

Two of the leading candidates have been the subject of prominent corruption allegations and investigations. Do has long been accused of illegally living outside his district in a home he and his wife own in North Tustin, while Pulido paid a $13,000 fine for illegally voting to award a contract to a businessman with whom he traded a home for a parking lot, and then concealing his financial ties to the businessman.

The residency fraud allegations against Do have been raised in mailers against him funded by billionaire Kieu Hoang. Do declined a request this week by Voice of OC reporter to respond to the allegations.

Do faced a DA investigation in 2015 over whether he was living outside his district in the North Tustin home, and the prosecutors’ office, under then-DA Tony Rackauckas, ultimately declined to file charges.

The approach of that investigation was different from another DA residency fraud investigation last year, under new DA Todd Spitzer, into Santa Ana Councilman Roman Reyna, who ultimately was charged and pled guilty.

In Reyna’s case, DA investigators put their target’s homes under 24-hour video surveillance to record where he was staying at night, and cited that evidence to obtain search warrants on homes and cell phones.

The 2015 investigation of Do involved interviewing neighbors and reviewing documents like DMV registrations, but did not involve placing Do under surveillance to see where he was staying at night or seizing cell phones, according to the DA’s office’s description of its 2015 investigation. At the end of that inquiry in fall 2015, DA officials said the evidence did not show Do lied about his residency.

In Pulido’s case, he agreed to the $13,000 fine to state campaign finance authorities in 2015, while denying that he gained value from the land swap with the businessman whose contract he voted for as mayor.

The Orange County Assessor’s office appraised both properties and found that the fair market value of the house Pulido and his family received from the businessman was worth $430,000 — more than twice the market value of the parking lot Pulido traded for the home.

Pulido also was under a DA investigation for criminal charges – including a potential felony – though the DA’s office at the time, also under Rackauckas, declined to charge him, citing land values from an appraisal commissioned by Pulido’s defense attorney, which showed no gift to Pulido.

Pulido was also accused of running a side business personally renting out city-owned property and interfering with police decisions about which illegal pot shops to raid, according to testimony by city officials in lawsuit by former Santa Ana Police Chief Carlos Rojas.

City executives, during internal group meetings, brought up reports Pulido personally was renting out space at city-owned properties, including a toxic area of a historic YMCA building, the city’s transit center, and parking lots, according to testimony by Rojas, who went on to become police chief for the San Francisco Bay Area’s transit system before retiring.

Pulido previously said he “categorically denies” all the allegations in the lawsuit testimony. He and other council members ultimately agreed to pay Rojas and his attorneys $350,000 to settle the lawsuit.

A new round of corruption allegations against Pulido emerged more recently. In sworn lawsuit filings this month, the mayor was accused of urging a business seeking a city permit approval into hiring Pulido’s business partner as their permit consultant. The lawsuit also alleges Pulido did not disclose his income from his alleged business venture with the consultant – a marijuana company based in the city of Adelanto – on his legally-required financial disclosure forms for candidates.

Asked for his comment this week on the new corruption allegations, Pulido said, “I think it’s all irrelevant. It’s just people trying to bring up issues.”

Asked if the allegations are inaccurate, Pulido said, “Correct. It’s all been a part of other lawsuits that have all been dismissed.”

The current judge on the case has not yet ruled on whether the new court filings alleging corruption against Pulido have merit or not.

Changes in demographics and voter registration has made the 1st District increasingly competitive for an incumbent Republican, though how many voters turn out to cast ballots ultimately is a huge factor in who wins.

When Do last ran in 2016, Democrats had a 14 percentage-point advantage in voter registration in the district, and Do won by 0.4% of the vote.

This time, the Democratic voter registration advantage has widened to nearly 20 percentage points.

The runoff election is scheduled for Tuesday, Nov. 3.