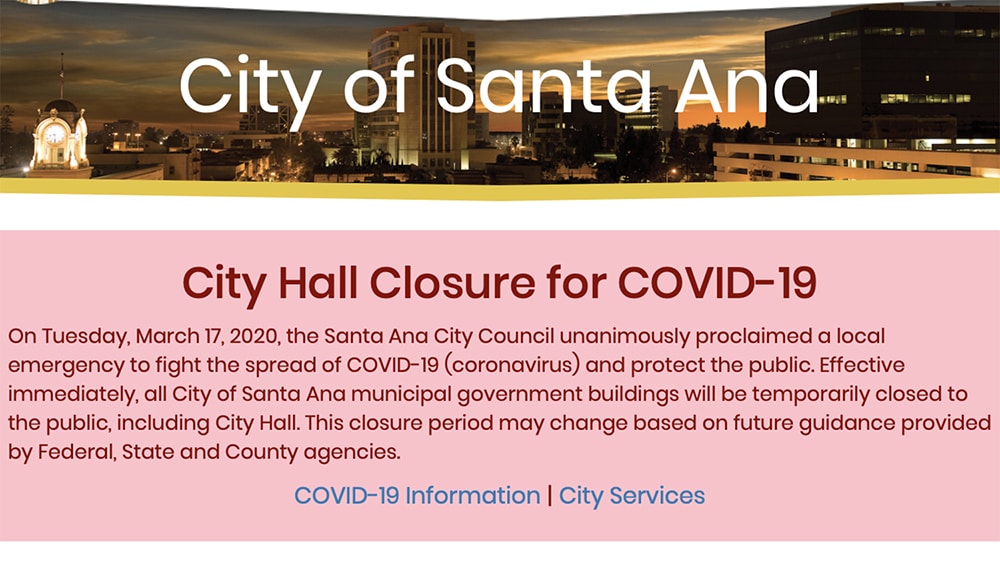 Editors’ Note: This dispatch is part of the Voice of OC Youth Media program, working with student journalists to cover public policy issues across Orange County. If you would like to submit your own student media project related to Orange County civics or if you have any response to this work, contact Digital Editor Sonya Quick at squick@voiceofoc.org.

In their last in-person city council meeting before moving to virtual, councilmembers unanimously voted to declare a local emergency before passing an assortment of actions designed to slow the economic impact of COVID-19 and ease the financial burden on Santa Ana residents as a result of the coronavirus pandemic.

The resolution guarantees that regardless of immigration status, residents cannot be evicted and utilities will remain on with late fees waived.

“The eviction is a really critical piece and it’s really going in accordance with the governor’s letter,” Mayor Mike Pulido said, referencing the executive order issued by Gov. Gavin Newsom March 16 that gave cities authority to “halt evictions for renters and homeowners, slows foreclosures, and protects against utility shutoffs.” The protections also extend to businesses.

Councilwoman Cecelia Iglesias clarified that this doesn’t waive tenants’ obligation to pay rent, it only stops the eviction process. Landlords will still be expected to follow California legislation enacted at the beginning of the year that limits the amount that rent can be increased to protect against rent-gouging. Iglesias encouraged renters and landlords are encouraged to open a dialogue and come to an agreement that works for both sides.

The emergency resolution gave the city attorney authority to enforce laws against price-gouging.

“We all know the real issue is the tsunami that’s approaching us,” remarked Mayor Pulido. “ It’s the virus. And we need to do everything we can to keep ourselves safe. Until the wave passes, it can’t be business as usual with a little modification.”

Other Items from the Emergency Resolution: