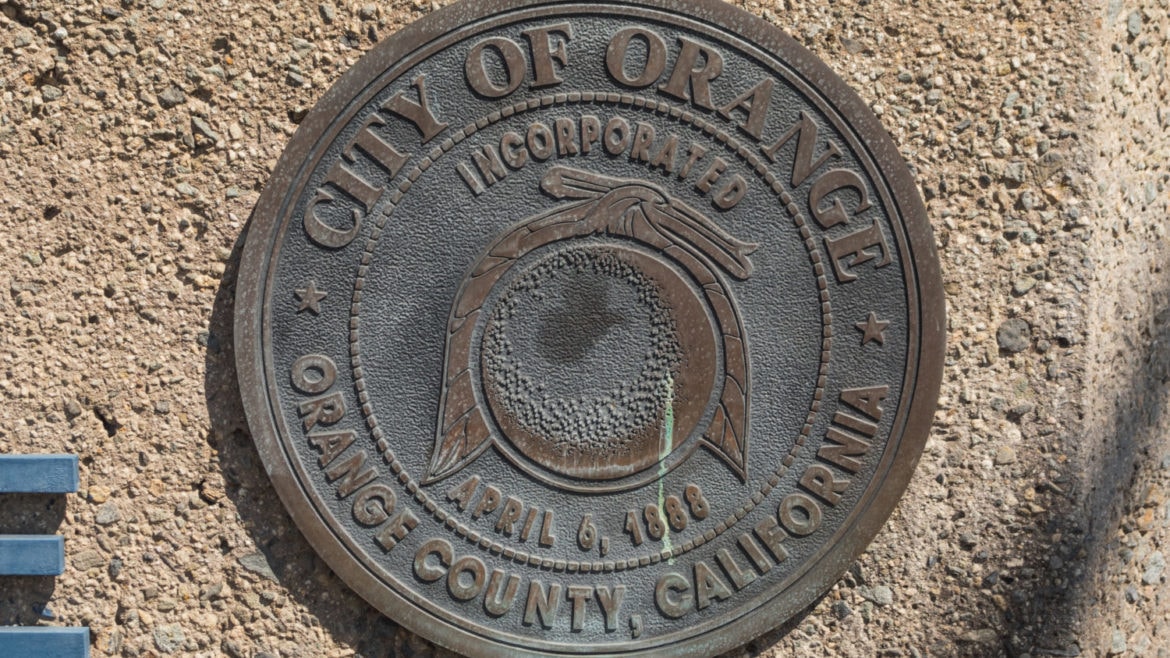 The city of Orange seal.

Orange is considering joining a handful of cities in Orange County that have tightened restrictions on short-term rentals.

The City Council in February voted unanimously to direct staff to prepare a zoning ordinance for consideration by the Planning Commission and then the council to regulate short-term rentals in certain zones and prohibit them in other zones.

The commission will consider the ordinance and either decide to approve, modify, or send it back to staff for revision. However, due to COVID-19 scheduled meetings have been postponed.

At the February council meeting, several residents voiced concern and opposition toward permitting short-term rentals, commonly advertised on platforms like Airbnb and Homeaway, as they were worried about the safety of the community.

“These people come in all hours of the night, slamming doors and making noise, the cars parked everywhere, traffic, trash… I just don’t feel very safe anymore in my neighborhood because of these things. This is not a zone for a commercial business. I didn’t come here for retirement just to have people drive in 24 hours a day – I feel like I’m living next to a hotel,” said Kelly.

Resident Silvia San Nicolas operates a short-term rental in town. For Nicolas, renting out her two bedrooms in her house has enabled her to keep her home, pay half of the mortgage, the taxes on it and pay utilities.

“The economic benefits of a short-term rental don’t extend just to the homeowners who are trying to make a few bucks… but it also provides economic opportunities to other businesses in Orange… I make sure the folks that come visit are not only vetted, provide me with IDs prior, and send a signed rental agreement that has rules,” Nicolas said, adding she has run a complaint-free short term rental for the past three years.

Mayor Pro Tem Mike Alvarez said he recognizes that it is the bad homeowners who are causing the trash, noise, and other problems related to their rentals.

“Every time I voted on something it was to protect the neighborhood and I had to really believe in it. And at this point, I’m sorry to say, it’s the bad owners of the STRs that are making it tough to approve something … but I want to see if we can come up with something,” said Alvarez.

According to a city staff report, in 2013, when short-term rentals were becoming more prevalent, Orange began sending notices to properties listed on rental sites and informed homeowners that they were required to obtain a business license and collect transient occupancy tax for the city. However, in 2017 staff determined the city could not issue a business license or collect transient occupancy tax as short-term rentals were not specifically allowed in the Orange municipal code. At that time the city opted not to prohibit the rentals.

Staff estimates there are approximately 150-200 short-term rentals in the city. The code enforcement staff usually receives two to three complaints a week regarding the rentals.

Councilmember Chip Monaco said he was concerned about short-term rentals in Orange but concluded the city has not defined the size and scope of the problem.

“I want the STR owner or permittee in Orange to be an Orange resident. I will not support any STR from anyone outside of this community…I will not risk having [residents] from outside of this town, come in and try to make money on the backs of my neighborhood,” said Monaco.

A proposed ordinance could permit short-term rentals under specific conditions, according to a city staff report, such as:

As of deadline, no Planning Commission meetings had been scheduled.