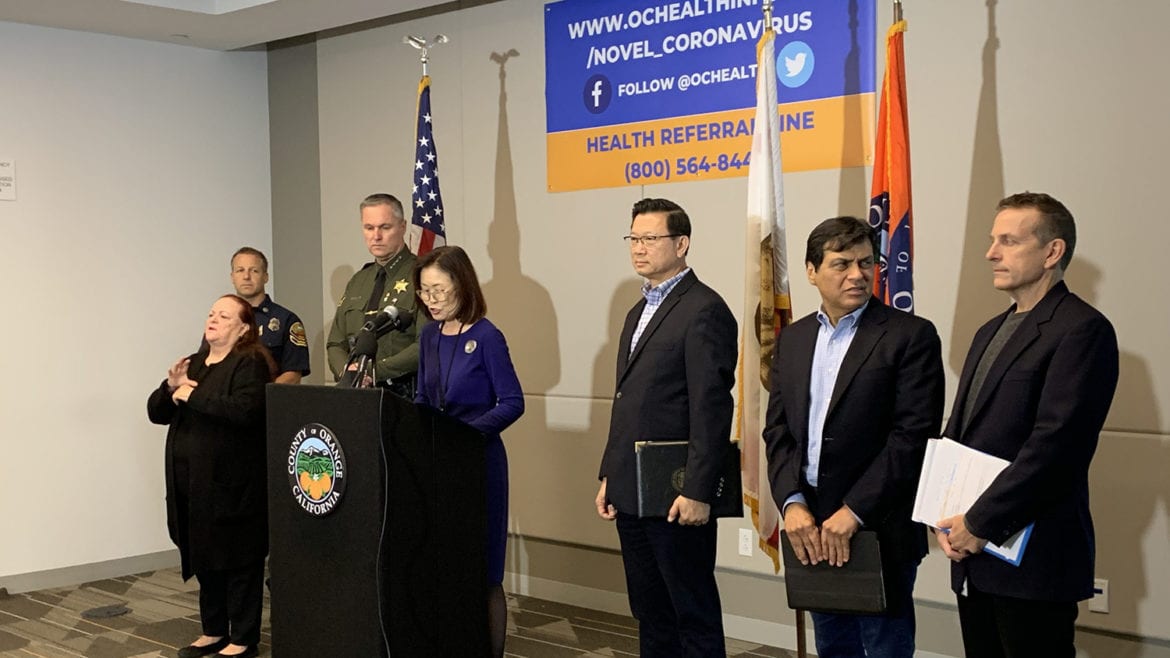 T he first fatality in Orange County from the novel coronavirus was the public’s right to know.

Whether it’s finding out about the readiness of hospitals or figuring out how many testing kits exist or asking about what cities’ residents are testing positive for the virus, the answer most often from the County of Orange in the past few weeks is we can’t say.

Press releases are slow to come, mostly at the end of the day and often times contain basic errors like bad website addresses for things like public briefings or wrong names of government agencies that require the resending of entire releases.

Video and audio feeds for virtually all the county briefings have been last-minute, come through Facebook Live and have been hard to listen to.

You would think that after county supervisors spent nearly half a billion dollars on their huge new government complex in downtown Santa Ana, that it would come with a modern teleconferencing center, right?

In fact, I hear that the internet connectivity is so bad in the new County government complex that taxpayers soon have to spent nearly a half million dollars in tech upgrades to meet new challenges.

This has to change.

In the midst of a disaster the most important thing people look for is quick and clear information about what is happening and what the government is doing to respond.

The public deserves the truth about our situation, our challenges and our options.

“A critical element of pandemic planning is ensuring that people and entities not accustomed to responding to health crises understand the actions and priorities required to prepare for and respond to a pandemic,” concludes the 2005 federal pandemic plan.

“Be First: Quickly sharing information about a disease outbreak can help stop the spread of disease, and prevent and reduce illness and even death.”

“Be Right:  Accuracy establishes credibility. Information should include what is known, what is not known, and what is being done to fill in the information gaps.”

“Be Credible: Honesty, timeliness, and scientific evidence encourage the public to trust your information and guidance. Acknowledge when you do not have enough information to answer a question and then work with the appropriate experts to get an answer.”

If anything, we have county officials and public information officers getting irritated at press and public questioning.

For example, in recent weeks county officials kept lecturing Orange County residents about why they just couldn’t inform them on what cities had people testing positive for the novel coronavirus.

Last week, to his credit, County CEO Frank Kim finally relented and announced the release of the city data – as is the case in other So Cal counties.

Yet people deserve information during a crisis.

And they have the right to make informed decisions using the government data their taxes paid for.

They don’t need condescending speeches about how they might misread data from technocrats who are themselves deciding what to release largely along political lines.

We need to trust our leadership now more than ever.

One of the key goals in the National Strategy for Pandemic Influenza is to “identify credible spokespersons at all levels of government to effectively coordinate and communicate helpful, informative messages in a timely manner.”

All with limited questioning from the public or the press.

Indeed, I found it incredibly ironic last week when Supervisor Steel – who is running for Congress – came out in front to plead for medical supplies.

She then turned it over quickly to Orange County’s Chief Health Officer Dr. Nicole Quick who went into the sad details that we are facing critical shortages of personal protective equipment.

Quick tried to put a happy face on that news by saying, “resources are available but scarce.”

We should have been allowed to ask why we are facing such shortages.

It would have been great to have put the question directly to Steel about her board of supervisors’ budget priorities as board chair that have left such critical needs unfunded.

Since fiscal 2008, discretionary dollars spent on health care are down by $68 million, or 30 percent. During the same time, spending on the social services agency dropped by $50 million, down 28 percent.

Meanwhile, spending on the Sheriff’s Department – whose deputy’s union spent lavishly on re-election campaigns for Do, Steel and other county supervisor incumbents – has gone up by $159 million, up 98 percent.

Thus, the lax response to the coronavirus, which is now triggering acute medical shortages, started a long time ago.

Yet politicians like Steel and Do rarely will respond to press inquiries after the television lights go dark.

That’s why when the publicity lights go on in this new era of virtual government, it’s so critical that the public and press be allowed to engage.

Correction: An earlier version of this story incorrectly stated that the Sheriff’s Department spent money on county supervisors election campaigns. The Deputy Sheriff’s union is active in supporting candidates not the agency. We regret the error.