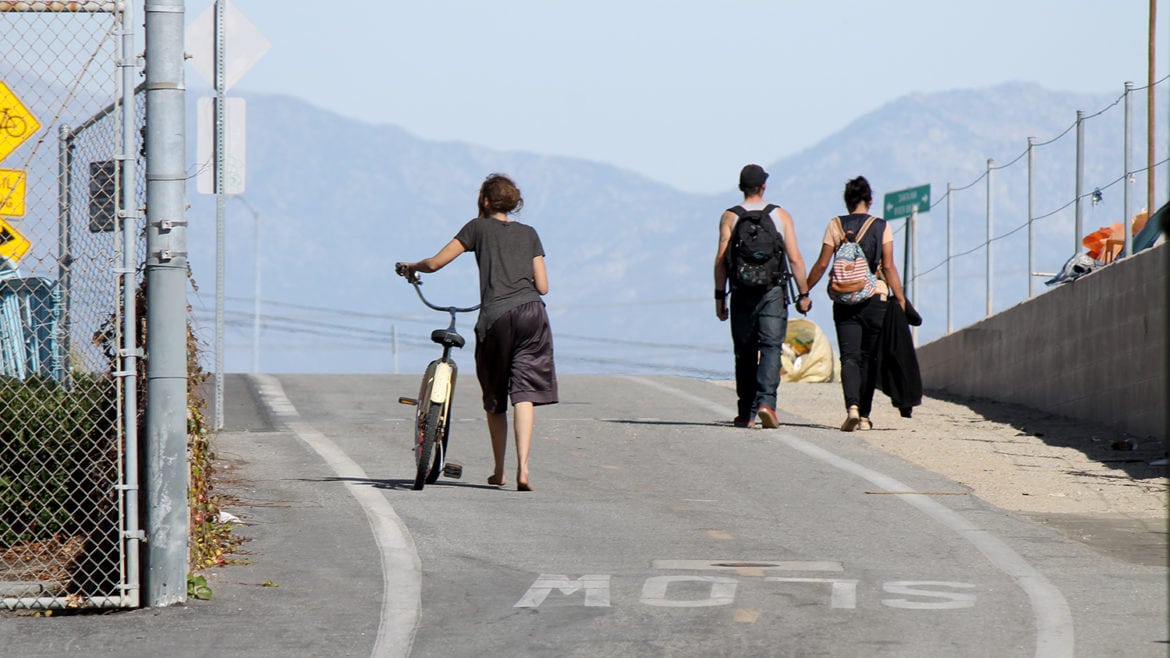 A couple leaves the Santa Ana Riverbed homeless camp, heading north to the Honda Center on Jan. 29, 2018. The woman walking her bike is carrying an empty jug to fill with water at a public restroom.

Laguna Hills officials became the latest city to oppose a County of Orange initiative to house homeless at local hotels during the ongoing pandemic, becoming the first to actually file a lawsuit against the county effort.

“The County’s decision to temporarily house COVID-19 positive or presumed positive individuals in a repurposed hotel poses a direct threat to the health and safety of the surrounding community. The Agreement will ultimately result in importing into the community a large group of sick and at-risk persons, when the City of Laguna Hills has thus far only had minimal occurrences of the virus,” reads the lawsuit, which was filed Tuesday shortly after county officials disclosed the effort.

As of the latest numbers released by county Health Care Agency officials Wednesday, the city of Laguna Hills had 13 confirmed cases among its population of 31,500.

Countywide, the virus has killed 22 people out of 1,376 confirmed cases, as of the latest numbers released Wednesday. There’s 104 people hospitalized from the virus, with 45 in intensive care units, according to the OC Health Care Agency.

The County plans on fighting the lawsuit, according to a statement from the OC Emergency Operations Center.

“With appropriate community safeguards and security protections in place, the County of Orange is implementing Governor Newsom’s Project Roomkey to lease hotel and motel rooms in order to protect vulnerable individuals experiencing homelessness who are high-risk for developing serious illness from COVID-19. As such, the County will be opposing the efforts of the City of Laguna Hills to obtain an injunction,” reads the statement.

The lawsuit comes on the heels of an agreement that fell apart at the Ayres Hotel in neighboring Laguna Woods after residents protested that site. The City Council threatened a lawsuit, but the hotel withdrew from the plan before any agreement was finalized.

“Following the request from the Ayres Hotel … we went to the next available hotel in the southern part of the County,” CEO Frank Kim said at a Monday news conference.

Kim said the county is aiming to have hotels and motels in each of OC’s regions — north, central and south.

He said before the County publicly announces locations, “we want to make sure to address all of the questions from the cities.”

But the lawsuit contends Laguna Hills officials had no dialogue with County officials before the hotel was contracted.

“On April 7, 2020, without any prior consultation with the City, the County entered into an Occupancy Agreement with [the hotel] to take possessions of the Hotel for a minimum of 90 days,” reads the lawsuit.

Although there were discussions of housing homeless people in three big tents set up throughout OC, pressure from Sacramento pivoted county officials away from that plan.

“The state has encouraged us to use the bed capacity within the motels. Their preference would be for us to house otherwise healthy homeless in the motel program as well,” Kim said Monday.

Meanwhile, Gov. Gavin Newsom put together a team to study on when to begin reopening sections of California’s economy.

At a Tuesday news conference, Newsom said he should have an answer early May.

The stay-home orders put millions of Californians either out of work or reduced their hours.

Although the County has to follow the state’s lead, some Orange County Supervisors are beginning to ask when businesses can begin reopening after state and county officials have said the new coronavirus hasn’t hit the population as hard as initially projected.

“Because the worst thing we can do is lift restrictions and the next thing we know there’s a surge and our health care system is overwhelmed,” said Supervisor Lisa Bartlett at the Tuesday board meeting.

Bartlett said she would like to expand testing and case monitoring of people who’ve recovered from the virus to see if the illness comes back. It would be a good indicator for allowing people back into the workforce, she said.

Just over 15,000 out of 3.2 million people who live in OC have been tested. Testing kit shortages have plagued counties and states nationwide.

At Tuesday’s meeting, Supervisor Andrew Do pressed Public Health Services Deputy Director, David Souleles, to get more testing kits so officials can begin working with the state on plans to reopen businesses and public land.

He wanted Souleles to build a plan to get more testing kits and work more with private testing labs.

“So what I’m asking you to do is to come back to the board with a plan looking at all of the different test capabilities,” Do said. “And how we position ourselves to meet that demand.”

Souleles replied, “We certainly can come back with a framework for that, for sure.”

Wagner also wanted to know when to begin lifting restrictions.

“The data shows that COVID-19 is far less deadly than other coronaviruses,” Wagner said. “How will we know when this is over and when we can lighten those, admittedly, draconian regulations that we’ve imposed?”

He said whatever actions may happen at the state or county level can’t “allow for an unchecked surge of infections that would then overwhelm our hospital systems.”

“I can guarantee that we are looking at what we would like to happen and I think we are going to see a phased approach,” Quick said. “I think at this point it’s premature to say what we will do in OC without knowing what the statewide approach will be, but we are considering all options at this point.”