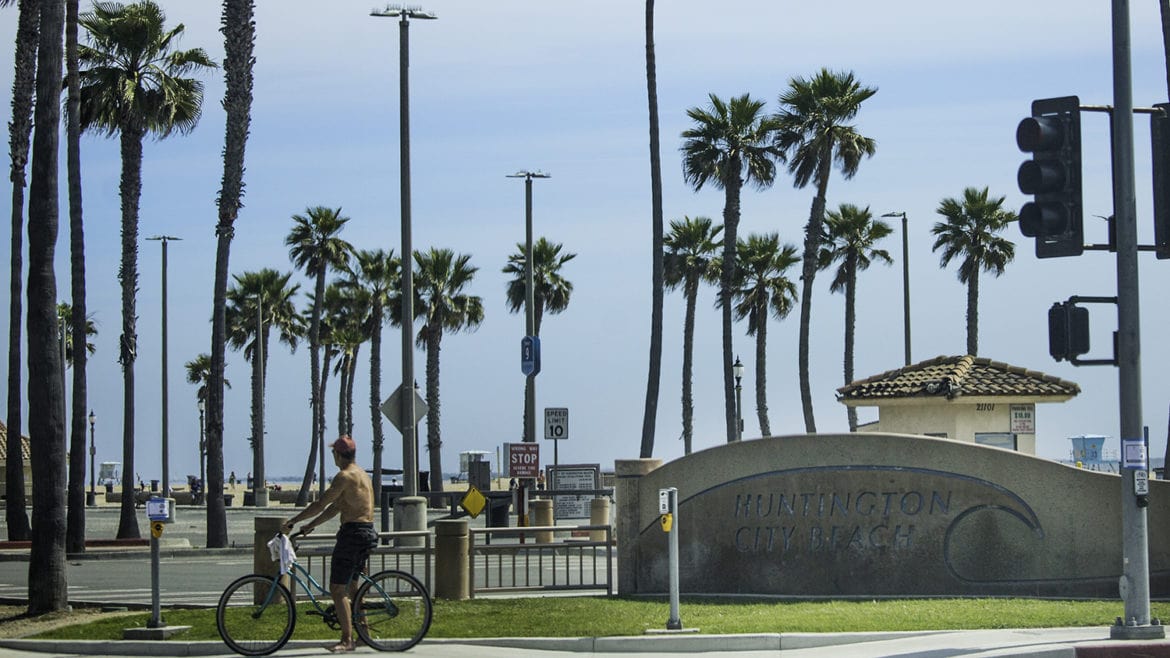 Huntington Beach intends to sue the state after Gov. Gavin Newsom announced that he would be closing all Orange County beaches.

The Huntington Beach City Council voted 5-2 to file a lawsuit against the State of California, with Councilmembers Barbara Delgleize and Kim Carr opposing the move.

While Newport Beach did not take any action Thursday night, Councilman Kevin Muldoon suggested that the city follow Huntington Beach and sue the state, claiming that Orange County had “flattened the curve.”

A recent Voice of OC story shows coronavirus hospitalizations in Orange County have been steadily increasing over the last month, leading to questions over whether or not the county has “flattened the curve.”

Subscribe now to receive the latest Orange County news in your email inbox.

“I would like to call for a special council meeting,” Muldoon said. “That would allow us to join the city of Huntington Beach, or any other Orange County cities and seek all legal means available to fight the arbitrary and unconstitutional exercise of power by the governor, that would take away control of our local beaches.

“That would essentially hand our prior decision to keep the beaches open into the trash bin.”

Earlier today, County of Orange officials downplayed any legal action, with Supervisor Don Wagner stating that he preferred to work with the state through negotiation rather than litigation.

After Huntington Beach announced they would be suing the state, Wagner said he thought this may be the first of many lawsuits in a text to Voice of OC.

“I continue to believe that the county has no legal standing to sue the state but I know lawsuits from individuals and businesses in Orange County are coming,” Wagner said. “I would hope the governor will not fight a destructive legal battle, but instead listen to local leaders, who are in close consultation with our own health care professionals.”

“I’m disappointed that the governor’s making decisions based on a few photos rather than on the reality of the situation on the ground.”

Both cities met in closed session to discuss their response to the governor’s action, with no public discussion on the items in Huntington Beach and limited comments from several Newport Beach councilmembers.

Both cities also expressed confusion over the governor’s order and what it would require from them.

At the beginning of Huntington Beach’s meeting, Mayor Lyn Semeta stated they had not received the precise language of Newsom’s order.

“We have not received any written directorate from the state regarding the governor’s announcement,” Semeta said.

Newport Beach Mayor Will O’Neill said the directive was not entirely clear in some aspects.

“What we will anticipate is that our police department and our fire department will spend significant time endeavoring to determine what the directive is calling for and will do their best job to make sure we are conducting education and to the extent the directive is clear enforcement as well,” O’Neill said.

Earlier this week on Tuesday, the city council decided to keep Newport’s beaches open with a greater police and lifeguard presence for the upcoming weekends despite Newsom’s remarks.

On Thursday, Newsom chose to only close Orange County beaches after seeing photos of Newport Beach from the past weekend, where an estimated 40,000 people came to the beach on Friday and Saturday.

“We’re going to do a hard close in that part of the state. Just in the Orange County area,” Newsom said during a news conference on Thursday. “The images we saw … were disturbing.”

Newport Beach officials insist that the photos were misleading and that city officials were enforcing social distancing on the beach.

Newport Beach Police Chief Jon Lewis and Fire Chief Jeff Boyles said a majority of the beach goers they observed on April 24, 25 and 26 were spread apart. The city shared aerial shots of the beach taken on April 25 that showed more people spread out.

The rest of the state’s beaches will remain under the control of local governments pending further decisions by the governor.