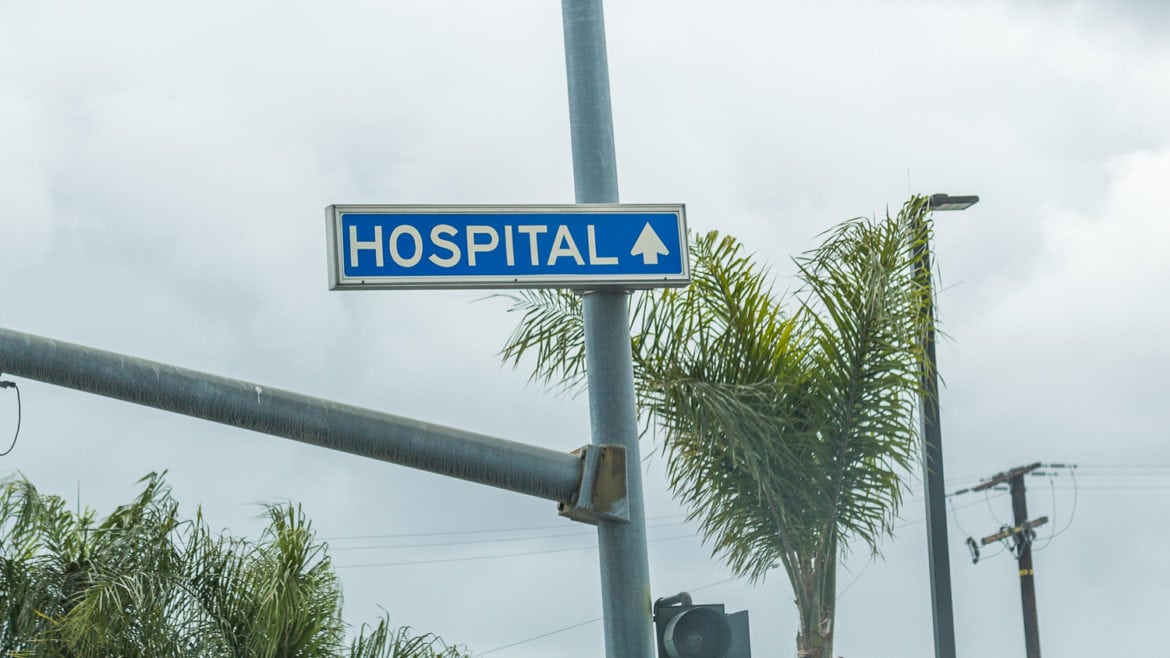 A sign directing towards a nearby hospital in Yorba Linda.

The virus has killed 19 people out of 1,283 confirmed cases in Orange County as of Monday afternoon. There’s also 103 people in the hospital, with 51 in intensive care units.

As the virus spreads, officials are putting medically vulnerable and elderly homeless people into hotel and motel rooms after Sacramento urged the County.

“The state has given us very strong guidance to make these motels and hotels regionally available,” county CEO Frank Kim said at a Monday news conference.

Kim said there will be rooms in north, central and south county.

Originally, officials were looking to put up three tents at regional parks throughout OC to house homeless individuals in an effort to thin the shelter population so people can follow the six-foot physical distancing guidelines from the CDC.

Kim said tents could be used once the hotel and motel rooms are used up.

“Depending upon what our needs are, you’ll see us deploy some or all of them,” Kim said.

“We have motels we’re going to use those first and then as those tents arrive, we will plan for the worst case scenario,” Kim said. “Depending on what happens, you may see a pivot.”

While virus hospitalizations have shot up the past few weeks, the number appears to have been stabilized in recent days.

Officials have acknowledged the shortage of testing kits, which is a problem nationwide.

So far, 14,175 people have been tested by the OC Health Care Agency lab.

“I want to remind everybody that what we’re most concerned with is the trend of cases,” Public Health Officer Dr. Nichol Quick said.

The number of new cases reported Monday was 9, significantly lower than 55 on Sunday.

And new cases seem to be declining, according to a day-by-day mapping of cases.

Quick said the trend is “moving in the right direction.”

Last week, state officials said the expected hospitalization surge over the next couple weeks may not be as intense as initially projected.

Quick said it’s still too early to know when non-essential businesses can reopen.

Gov. Gavin Newsom issued a stay home order last month, shutting down all non-essential businesses like bars, nightclubs, bowling alleys, movie theaters and a host of other entertainment venues. His order also encourages businesses to use telecommuting, if possible.

“I think at this point it’s premature to say what we will do in OC without knowing what the statewide approach will be but we are considering all options at this point,” Quick said.

The state’s plan is slated to be unveiled noon Tuesday, Newsom said at a Monday news conference.

“We began a process of establishing, more formally, of what it would look like and how we can begin a process of incremental release of the stay at home orders,” Newsom said.

Newsom said he’s been speaking with governors from Oregon and Washington to form a plan on reopening sections of the economy.

“Tomorrow we will lay out our California-based thinking on that effort,” he said.

Since the stay home orders were issued, over 2 million Californians applied for unemployment and scores of others are working reduced hours.

There’s also an incoming $2 trillion stimulus package from the federal government which will boost state unemployment payments by $600 a week.

Spencer Custodio is a Voice of OC staff reporter. You can reach him at [email protected] or on Twitter @SpencerCustodio.

Digital Editor Sonya Quick Contributed to this story. You can reach her at [email protected] or on Twitter @sonyanews.