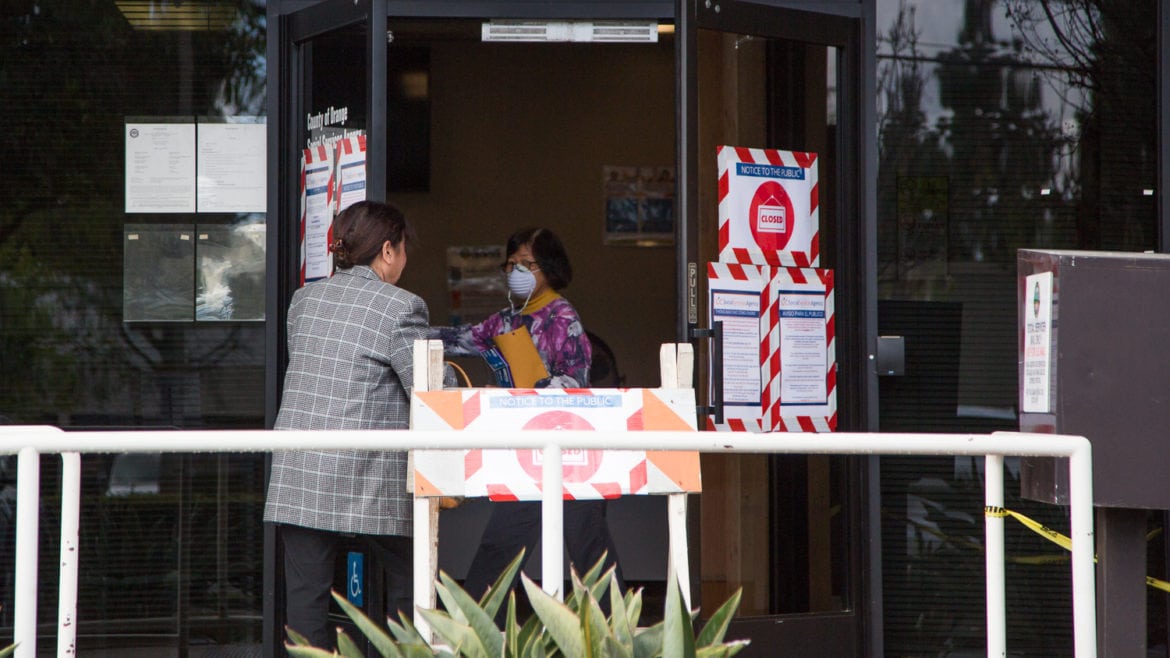 For weeks, Orange County cities were taking it upon themselves to enact their own mandatory face mask policies to help curb the spread of the novel coronavirus, while county health officials merely recommended people cover up when out in public.

The county only partially mandated face masks this week, when the Board of Supervisors on Tuesday voted 3-2 to require face coverings at essential businesses for their employees at places like grocery stores, liquor stores, gas stations, pharmacies and places where food prep is done. That mandate takes effect Friday.

But for residents out in public, face masks under the new county policy will remain “strongly recommended” under the original health guidelines from Public Health Officer Nichole Quick.

Without a broader county mandate, residents will see the laws vary by city in terms of who they apply to.

In cities like Costa Mesa and Buena Park, everyone — both residents and businesses — is required to cover up when out in public, with violations enforced with administrative fines.

In others like Santa Ana, Irvine, and Westminster, the enforcement actions only apply to employers and workers in essential businesses. Meanwhile, residents in those cities are merely encouraged to cover up.

And in Fullerton tonight, City Council members could join those cities in enacting their own law.

On the agenda is a possible mandatory mask law, placed at the request of Fullerton Councilman Ahmad Zahra, that appears to put emphasis on “essential businesses, employees and customers within these businesses.” To broaden the law and include Fullerton residents out in public is an “optional direction,” according to the agenda.

A lack of uniformity across cities in terms of their mask mandates could confuse people unfamiliar with those cities’ recent actions as to who should wear a mask and where, said Paul Yost, an anesthesiologist and board member for CalOptima.

“It would be helpful to have a consistent message across the county — it’s clearly in the best interest of decreasing the spread of coronavirus for people to cover their faces as they go outside,” he said in a Tuesday phone interview. “Seems like a fairly small sacrifice to make at this time.”

Still, some county and city officials are concerned over enforcement and have raised questions over public health laws’ impacts to individual rights.

At the Tuesday supervisors’ meeting, Supervisor Don Wagner questioned whether the mandatory mask law for businesses and their employees was “giving respect to our citizens that allow them to lead their lives.”

“The health department has not said we need these masks all the time and be this heavy handed,” Wagner said before the vote.

Supervisor Michelle Steele agreed, and was in favor of applying “should” verbiage, as opposed to “shall,” to the county mask policy.

Two Community Op-Eds in the Voice of OC this week — one from United Food and Commercial Workers Union Local 324 President Andrea Zinder, and another from Ocean View School District President Gina Clayton-Tarvin and Trustee John Briscoe — called out a “lack of action” by the supervisors leading up to Tuesday, and called on the county to make the mask guidelines enforceable.

Supervisor Andrew Do said employees who serve the public “have no choice but to violate” health separation guidelines like 6-ft social distancing to limit the spread of the virus. “They have to. There’s no way you can do a transaction six feet away and these employees come into contact with hundreds of people in the course of their shift.”

“I think we are not protective enough…that’s why we need ‘shall,’” he said.

“Residents can make their own face coverings at home from a variety of materials and should refrain from purchasing personal protective equipment that is critical and in short supply for our healthcare workers, such as N95 and surgical masks,” Quick said in an April 2 news release.

Nothing in her advisory required employers to provide masks to their employees.

At a Tuesday county Board of Supervisors meeting, Quick laid out a vision for the county where stay-at-home orders would be lessened in a scenario where the county’s hospitalization rates stabilize.

In that scenario, face coverings would be an “element” of other measures like asking older populations to remain at home, and physical distancing at restaurants with in-house dining.

But while “hand-washing and physical distancing are critical” to curbing the spread and transmission of the virus, Quick told the supervisors, “face-coverings are an additional step.”

When the Buena Park City Council made masks mandatory at its April 14 meeting, Councilwoman Beth Swift called it “overkill.”

While she agreed it’s a “great idea for people to wear face coverings” – she said she herself wore one for a recent doctor’s appointment – she said it would be a “waste” of a police officer or code enforcement officer’s time to go out and cite people for violations.

“I don’t want people feeling like big brother’s going to bop them over the head if they’re not wearing a face covering,” Swift said, adding that the city should instead continue its information campaign and merely encourage residents to cover themselves.

Councilman Art Brown said in order for people to comply, the law needs to have some legal teeth.

“If you don’t have some type of authority, people are just going to say: ‘I’m not going to do it,’” he said before the vote. “You got nothing to back it up with.”

Erwin Chemerinsky, a constitutional lawyer and Voice of OC board member, in a written response to questions said the local laws are “clearly constitutional” in terms of their implications for individual citizens’ rights.

“The government can take all actions that have a real and substantial relationship to protecting public health,” Chemerinsky — who’s also the Dean of Berkeley Law — added, referring to an Op-Ed he wrote for the Los Angeles Times.

Similarly, individual rights have come into question when it comes to residents protesting the public health orders.

Protesters have popped up in San Clemente, Huntington Beach and Newport Beach since last Friday, citing a desire to get back to work. Others said the stay home order is government overreach, while some believe the virus is a lie, citing a variety of conspiracy theories.

There have been 1,676 cumulative coronavirus cases in Orange County, and it’s killed a total of 33 people as of Tuesday.

Constitutional law experts previously told Voice of OC that while the public health order and First Amendment rights present a delicate legal balance, the government could have a compelling argument for curbing protests in the interests of public health.

“I think this may be a clear case where the interests in public health and public safety outweigh the issues of public protests,” said California State University political science professor Jason Whitehead in a previous interview.

The more people can do to tamp down the spread of virus at this part time, “the fewer deaths and hospitalizations we’ll see in about two weeks,” Yost said. “That’s pretty clear.”