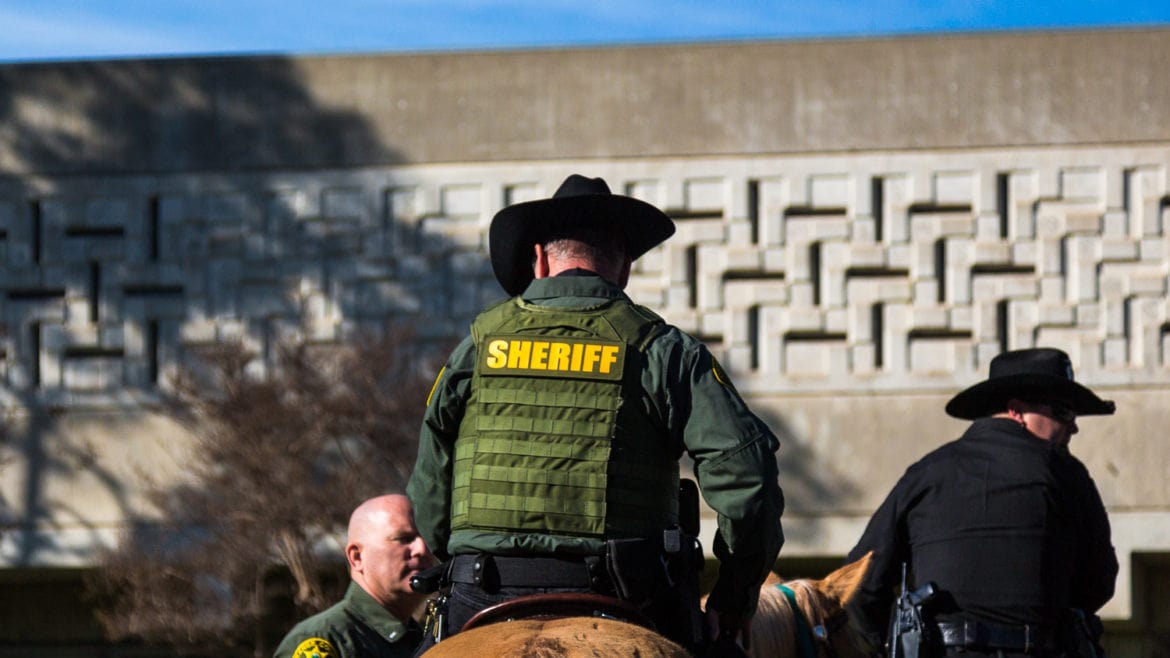 Orange County Sheriff's deputies in May, 2020.

All of Orange County’s mayors and county supervisors are now calling on Congress and President Trump to provide “immediate, direct funding” to all local governments in the next stimulus bill, as cities and counties face sharp revenue drops that their leaders say threatens local public safety.

“State and local governments are on the front lines of the pandemic providing critical health and human services and are in desperate need of federal assistance to address lost revenue as a result of the coronavirus pandemic. Failure to act will lead to a reduction of critical services that our constituents increasingly depend on,” states the letter, which is dated Wednesday and addressed to the President and Congress.

Signing on to the letter were a broad swath of local Republican and Democrat elected officials in OC, encompassing every county supervisor and all of the currently-sitting mayors.

“At a time when our constituents are suffering economic losses due to unemployment and other business closures, cuts to municipal services will impact their quality of life: fewer parks, more potholes, longer wait times for government permits, inspections, and other services,” their letter states.

“Without federal assistance, we will not be able to sustain these services or the critical health and public safety functions for which we are responsible.”

The letter comes as Congress begins debating a proposed $1 trillion aid package for state and local governments across the country.

The previous stimulus package for state and local governments, part of the CARES Act, was $150 billion, of which the County of Orange received $554 million.

In their new letter, the mayors and county supervisors are asking for money to go directly to both counties and cities, with more flexibility to use the money to avoid cuts to law enforcement and social safety net services.

“We’re going to struggle to meet the basic funding needs for our district attorney and the sheriff,” county CEO Frank Kim said at a news conference Thursday in response to questions from Voice of OC.

There’s a $140 million projected hit to the public safety sales tax that helps fund the Sheriff’s Department and DA’s Office, Kim said, calling it a “devastating loss” of funding.

“We’ll have less money to fund the sheriff and the district attorney. That affects our public safety. We do not want to see that service decline. But we may have to make some cuts there.”

A big financial hit also is expected to the county’s social safety net, including the eligibility workers who process applications for food assistance and public health insurance for people who lost jobs.

“So at a time when we’re seeing a rise in the demand for these core safety net services, the funding that is going to support the actual enrollment into these services is declining. So that is a challenge,” Kim said.

Mayors of some of the largest cities in OC emphasized they see public safety as being at risk if more financial support isn’t provided from the federal government.

“We’re unanimous on this request. And it’s from the north to the south, from Democrats and Republicans alike. We all want to defeat the virus and get our beautiful county back,” Mayor Miguel Pulido of Santa Ana said in an interview Thursday with Voice of OC.

“What’s at stake is our ability to function as a government, because if we can’t provide basic services like public safety, we lose the essential fabric of society. And we can’t afford that,” he added.

“What we need to do is open up responsibly, but very quickly, so that we continue to generate jobs and taxes and revenue for all of society. And of course that includes cities. We can’t let the cities go under and expect everything’s going to be okay.”

Irvine Mayor Christina Shea noted the stimulus money so far has come to the state and county, but not to OC’s cities. The CARES Act said funding can go only to local governments with at least 500,000 residents, a threshold met by the county government but not any of the cities in OC.

“It’s frustrating that all of this [CARES Act] money comes into the county, but the local cities are still having all these financial pressures to provide COVID needs for our community, but then we don’t have the funding for it,” Shea told Voice of OC in an interview Thursday.

“I think it’s very important that we are reaching out to every avenue, to the state, to the federal government, to try help backfill all of these costs that we have.”

The letter seeking new federal funding was signed by all 33 of the currently-sitting mayors in Orange County, which has 34 cities. San Clemente doesn’t currently have a mayor because its previous mayor resigned and the City Council has deadlocked on who to pick as his replacement.

The local call for action from Washington, D.C. comes as county supervisors gear up for votes next Tuesday on how to use the half-billion dollars in CARES Act funding the county received.

Supervisors Don Wagner and Michelle Steel have proposed providing $75 million of it cities to distribute to small businesses.

A different plan up for approval next Tuesday, from supervisors Andrew Do and Lisa Bartlett, calls for devoting $110 million of the funds to small businesses, nonprofits, cities’ pandemic-related costs, and food assistance for at-risk people.