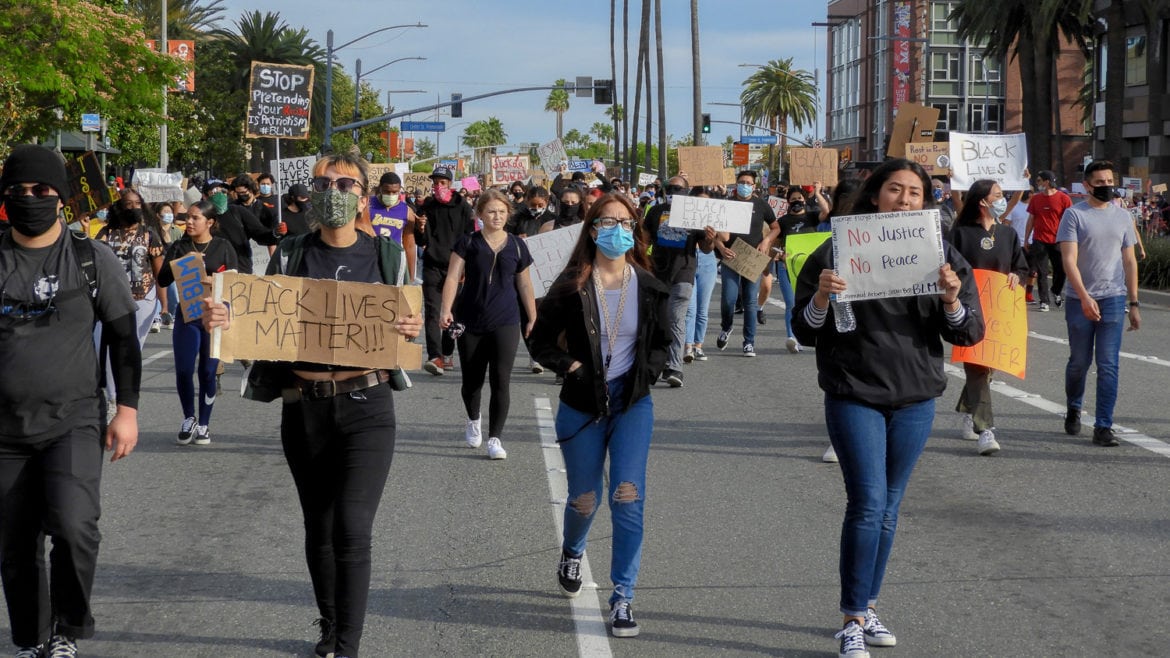 Protestors take to the street to demonstrate against police brutality, June 1, 2020 in Anaheim.

Some Anaheim City Council members are beginning to publicly question the city’s police budget following demonstrations against police brutality that have swept across Orange County and as protestors have raised questions about police finances.

The protests and police funding questions sweeping the country began when then Minneapolis police officer Derek Chauvin killed George Floyd after jamming his knee to the back of Floyd’s neck for nearly nine minutes on Memorial Day.

During the City Council’s Tuesday meeting, Councilwoman Denise Barnes said she’s received a large amount of messages questioning Anaheim’s police budget, which takes up 42% of the unrestricted general fund, according to the 2019-2020 budget.

“In the spirit of the letters and emails I believe it’s very telling that our community is very concerned about the direction that the items that we approve, the items whether we scrutinize over every little dollar that comes through the budget, that somehow the police are having a lot of expenses that don’t necessarily further the community in, I’m going to say a social way,” Barnes said.

Hundreds of public comment emails were received for the budget workshop session held before the council meeting with many people calling for police budget reallocation — many using the same email template.

Councilman Trevor O’Neil said he’s against pulling any funds from the police department and noted all departments will already have to make cuts because of the business shutdowns stemming from the novel coronavirus pandemic.

“I won’t be supporting policies that make our city less safe,” O’Neil said, “that pull police officers out of our neighborhoods and business areas.”

Scores of protesters across the nation and OC have held signs that read “defund the police” and called for funding reforms.

“As I understand the movement to ‘defund the police’ it is about reprioritizing the budgets. Not zeroing out the police, not having a police department,” Moreno said. “There is a concern in the emails we have received, I have concerns … about the militarization of our police department.”

In Anaheim, the budget conversation became localized when the police department had three items on the City Council’s consent calendar — items that routinely pass through without a discussion on a block vote.

The Dodge Chargers are slated to replace 10 current cruisers, which city staff said have an average lifespan of eight to 12 years.

But a staff report for the $40,000 cell phone data tracking software contract doesn’t specify what it does or how it operates. The report also notes the money will come from a restricted federal funding source.

Moreno asked Anaheim police Chief Jorge Cisneros to explain specifics, but Cisneros said he would need a representative from the company to be contracted, Fog Data Science, LLC.

“I feel uncertain,” Moreno said. “The public must be assured … it’s not being used on citizens and residents.”

A sparse staff report said the technology platform is part of a multi-city effort “to provide geo-spatial information for a one-year period for the Orange County Intelligence Assessment Center.”

The center or its purpose wasn’t defined in the staff report.

“Fog Data Science is a platform using geo-spatial data to identify unstructured raw data from mobile devices to correlate dates, times and locations. The unstructured data can be used after an incident to identify leads on previously unknown suspects, persons of interest, associates, and locations,” reads the staff report.

Due to the mounting questions over Fog Data’s software, Moreno unsuccessfully tried to delay the item until a representative from the company could answer questions. Barnes supported his move to delay, but after it failed, Moreno abstained from voting, while the other six council members approved the contract.

Another police spending item was a $700,000 contract to help police locate serious crime suspects and missing persons by tracking cell phones, which is slated to be paid for with asset and forfeiture funds.

Moreno asked if there’s ever been a warrantless search or violation of the department’s policy on tracking cell phones.

Cisneros said no, but noted he’s only been in Anaheim since 2018.

Moreno abstained from the $700,000 contract vote because he wanted to learn more about the cell phone tracking program before 2018.

Meanwhile, Barnes expressed concern over the militarization of police.

“We still need to understand and show in spirit that in our public safety that we are not going to be coming out in an image or perception that we are at war. I just wanted to make sure that was said for tonight.”