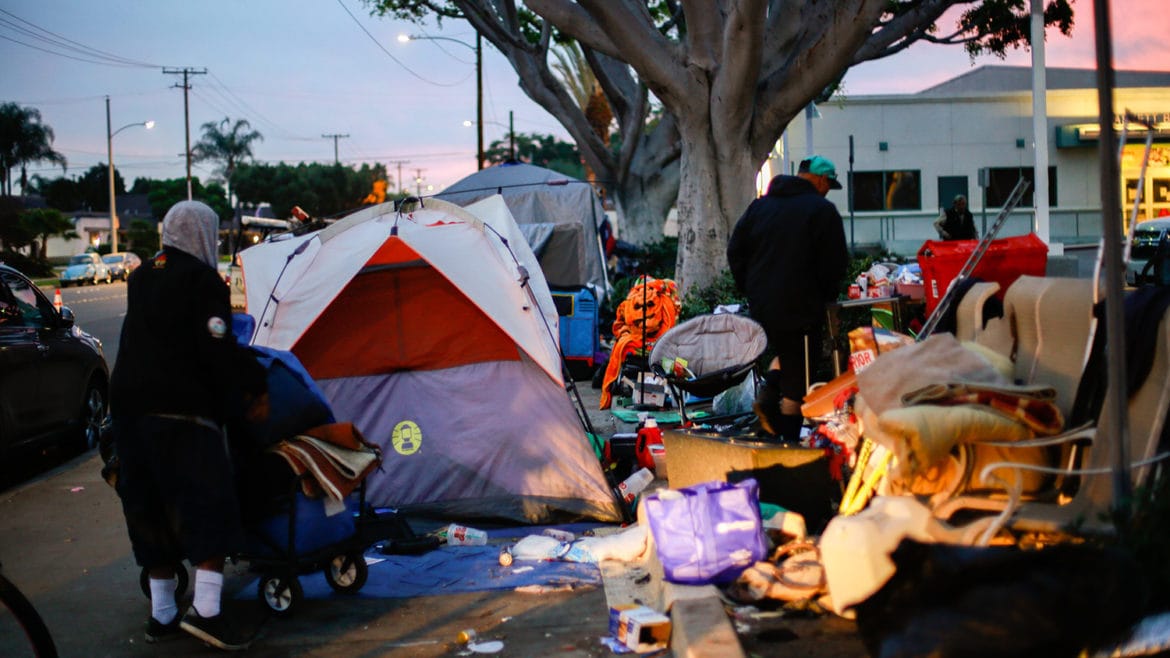 People packing up their tents and belongings in order to get ready to go to Anaheim's 200-bed emergency homeless shelter on Dec. 21, 2018.

Homeless people are continuing to die at record-high levels in Orange County, with 34 deaths in April and 30 in May, compared with an average of 18 monthly deaths in the prior 12 months.

OC Health Care Agency officials note that two-thirds of the causes of death are still under investigation by the coroner’s office. So far, two homeless people are known to have died from COVID-19.

“Deaths to homeless persons are also up in May 2020 compared to past years,” said Dr. Curtis Condon, research manager with the OC Health Care Agency, in a statement forwarded by a spokeswoman for the agency.

With so many causes of death still being determined, he added “we cannot speculate on the cause or reason” for the increase.

None of the deaths have been attributed to people living at shelters, which are considered higher-risk for coronavirus outbreaks because of the close quarters in which dozens, if not hundreds, of people live at individual shelters.

As of last week, four homeless shelters have had two or more residents or staff test positive for COVID-19, with two officially having outbreaks. At one shelter, which has not been identified publicly, 11 people were infected, all of whom were isolated while they recovered, according to the county.

Asked during a weekly news conference on Thursday about the higher homeless death counts and for an update on how many people have tested positive and where, county CEO Frank Kim said the infection numbers were low overall and credited county actions on testing and isolating people, calling the low infections so far a “wonderful success.”

“As you can imagine, many of our shelters house 200 or more homeless individuals. And the number of infections that I’m aware of, were generally below 10,” Kim said in response to questions from Voice of OC at a news conference last Thursday.

“The minute that we are aware of an infection that occurs at a facility, we can be on-site same day. We have rapid testing capacity with our public health lab. We are testing all the individuals, and then those that are symptomatic or those that are at highest risk, we’re immediately transporting to available shelter beds that we have within our hotel program,” he added, referring to the state’s Project Roomkey program that the county administers.

“At that program, they’re being cared for with clinicians, we have nurses on board, we have food assistance available, and security. So that whole program that has been set by the state and the county…has prevented the widespread infections and the large outbreaks that could have occurred within our homeless shelter program. So I consider that to be a wonderful success.”

But homeless advocates say the county isn’t doing its job to ensure city-operated shelters are following guidance from the U.S. Centers for Disease Control and Prevention for preventing outbreaks.

“We have repeatedly informed the county [of] its failure to require that all congregate living shelters comply with minimum CDC standards including 6 feet between beds, 6 feet between chairs in the eating area, and increased sanitation is a dangerous choice and a disregard for its duty,” said Brooke Weitzman, an attorney who represents homeless people in Orange County.

“While the county has taken steps, including offering isolation rooms to those exposed in County shelters, it continues to pretend it has no duty to enforce the same standards and provide the same resources in city or non-profit shelters. If the County gave the same owner deference to assisted living and SNF facilities, failing to require standards, offer testing,  or provide isolation, everyone would be appalled,” she added.

“At the same time, with the death toll rising, the county continues to disregard its duty as the healthcare provider and is allowing city politics to dictate solutions. For example, months into a deadly pandemic where handwashing is critical, there is no hygiene at the large encampment in Stanton. If the city won’t act, the County must.”

The Orange County Health Care Agency has declined to say which shelters have had COVID-19 outbreaks, citing privacy. But at least two shelters are known to have had outbreaks –the Salvation Army shelter in Anaheim and Fullerton Armory’s replacement shelter at the Independence Park gymnasium.

Between those two shelters, at least 13 people have tested positive, though county health officials have declined to break down how many tested positive at which.

Another two shelters – La Mesa in Anaheim and the Courtyard in Santa Ana – have each had two people test positive, though further testing has not found more cases and the two shelters are not considered outbreaks, officials said.

“It is not considered an outbreak at this point. We are still at one staff member and one resident,” Lyster told Voice of OC.

Weitzman says getting access to testing continues to be a challenge for homeless people in Orange County, particularly before they have symptoms, which is one of the main ways coronavirus spreads.

“There is no option for shelter residents to access testing until they are sick and symptomatic,” she said. “This far into the global pandemic we know that with congregate living, shared bathrooms, limited hygiene, and inability to social distance even at meals, Covid will continue to ravage this vulnerable community.”

Kim sees it differently, saying the county’s been proactive in testing and preventing COVID’s spread.

“The county has stood up many hotels and facilities related to Project Roomkey to limit the spread of, potentially COVID, on the most vulnerable members of our homeless population,” he said at the news conference.

“And to me, all the data indicates that the actions that were taken by the county were appropriate and successful. So even though we’ve had outbreaks in shelters, we’ve had capacity within our Project Roomkey hotel rooms that allow us to take those individuals and separate them from the larger homeless population within the shelters, so as to prevent additional outbreaks,” he added.

“So while we have had outbreaks of both staff and homeless individuals,” Kim said, “they’ve been fairly low in number.”