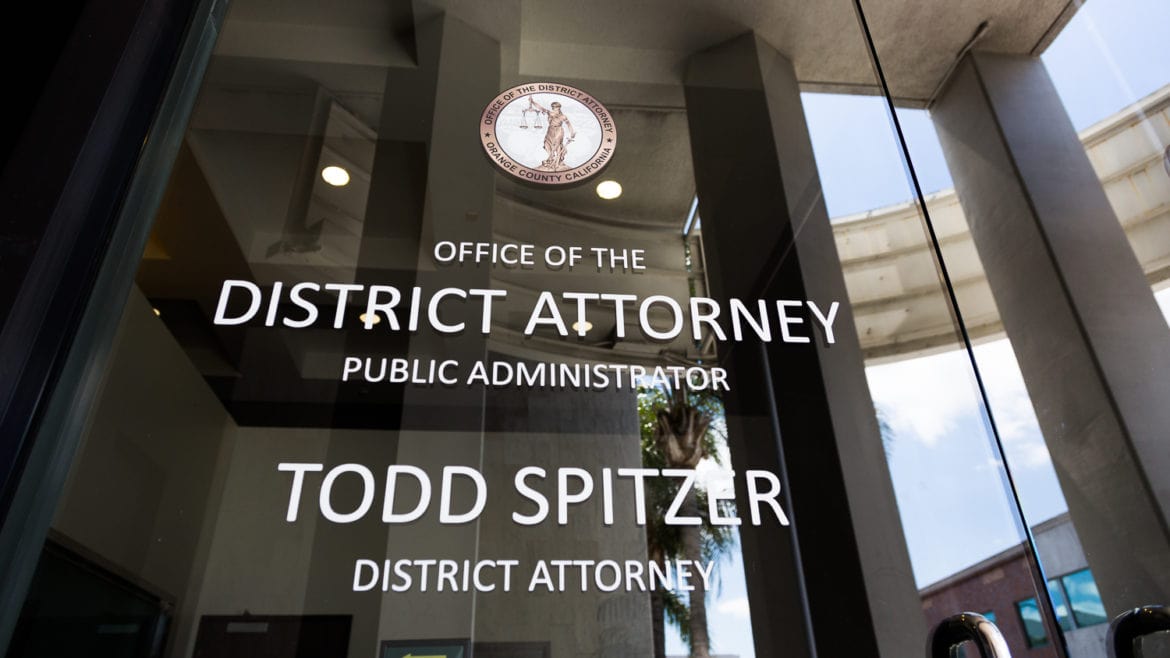 The office of District Attorney Todd Spitzer in Santa Ana on April 11, 2020.

Orange County prosecutors are pushing back on a local Superior Court judge who criticized their effort to drop rape charges in a high-profile case, saying his ruling has numerous factual errors and falsely accuses prosecutors of acting in bad faith.

“Throughout our involvement in this case, there has been a persistent theme that we have thrown away our ethics, integrity, and reputations by succumbing — either consciously or subconsciously — to pressure from [District Attorney Todd] Spitzer to reach a foreordained conclusion. Or, alternatively, we are painted as pathetic incompetents brought in to do a job for which we have neither the experience nor talent,” wrote senior deputy district attorneys Richard Zimmer and Karyn Stokke in their official court response Thursday to last week’s ruling.

“Neither of these scenarios is even remotely true. But, we are extremely disappointed that the Court appears, at least in part, to give credence to these utterly baseless allegations,” they added.

“While we are Mr. Spitzer’s employees — as we would be of any elected district attorney in Orange County — we are not Mr. Spitzer’s lackeys, yes-men, or sycophants.”

The case, originally filed in 2018, alleged a host of felony crimes by Grant Robicheaux and Cerissa Riley, including kidnapping and sexually assaulting seven women.

Spitzer announced in February that prosecutors found serious evidence problems with the case and would seek to drop the charges. But Judge Gregory W. Jones strongly rejected that request last week, and is now considering transferring the case out of the DA’s hands.

A hearing is set for 9 a.m. Friday on whether Jones should hand the case to the state attorney general to prosecute. It’s scheduled to be live streamed by the court at this link.

The DA’s office does not oppose referring the case to the attorney general, the prosecutors wrote in their court filing Thursday.

But they did push back – in detail – on several of the judge’s factual assertions about the DA’s handling of the case.

“Several portions of the Court’s opinion misstate key facts and misconstrues the basis for the [DA’s] motion,” the prosecutors wrote.

Asked if Jones could comment, a court spokesman said ethics rules do not allow judges to comment on cases they’re presiding over, except during court proceedings.

“Judicial officers are not permitted by the ethics code of the Judicial Council of California to comment on cases before them when they are not on the bench,” said Kostas Kalaitzidis, the spokesman for Orange County Superior Court.

In his ruling, Jones described the DA’s dismissal attempt as a “back room dismissal by prosecutors without the alleged victims ever having the opportunity to be heard.”

“The political actions of Mr. Spitzer have also been problematic,” the judge found, saying Spitzer had previously vouched for the criminal evidence in the case when in 2018 he handed out to the press copies of a sworn search warrant application with police reports about the alleged assaults.

The prosecutors on the case say the judge got it wrong.

“Our motion [to dismiss the charges] was based on our sincere – and continuing – belief that the totality of the evidence in this case is insufficient to prove the charges beyond a reasonable doubt,” Zimmer and Stokke wrote in their filing Thursday.

“We, as career prosecutors and officers of the court, acted in good faith and based on what we believe our ethical responsibilities entail,” they added.

“To assume otherwise without any actual evidence to the contrary and accuse us of seeking a ‘back-door dismissal’ when we have been nothing but candid with this Court, unfairly maligns our reputations and personal character with a judicial imprimatur that is exceedingly difficult, if not impossible, to fully erase.”

Tony Rackauckas, the former district attorney whose administration originally filed the case, agrees with the judge that the victims deserve to be heard.

“I think the important interest here is for the victims, and for them to be able to have their day in court,” Rackauckas told Voice of OC in an interview Wednesday.

“As I’ve said since this motion to dismiss began, how do you ignore all of the statements of the victims and just say they don’t amount to anything, and all these different women independently making these statements – and some of them quite similar – as to what happened with respect to Robicheaux and Riley. As well as the date rape [drug] found in their residence…it all amounts to very strong evidence that he and Riley were doing the things that they were accused of.”

Click here for the official live stream of Jones’ courtroom, where a hearing is scheduled for 9 a.m. Friday on whether to transfer the Robicheaux case to the state attorney general.