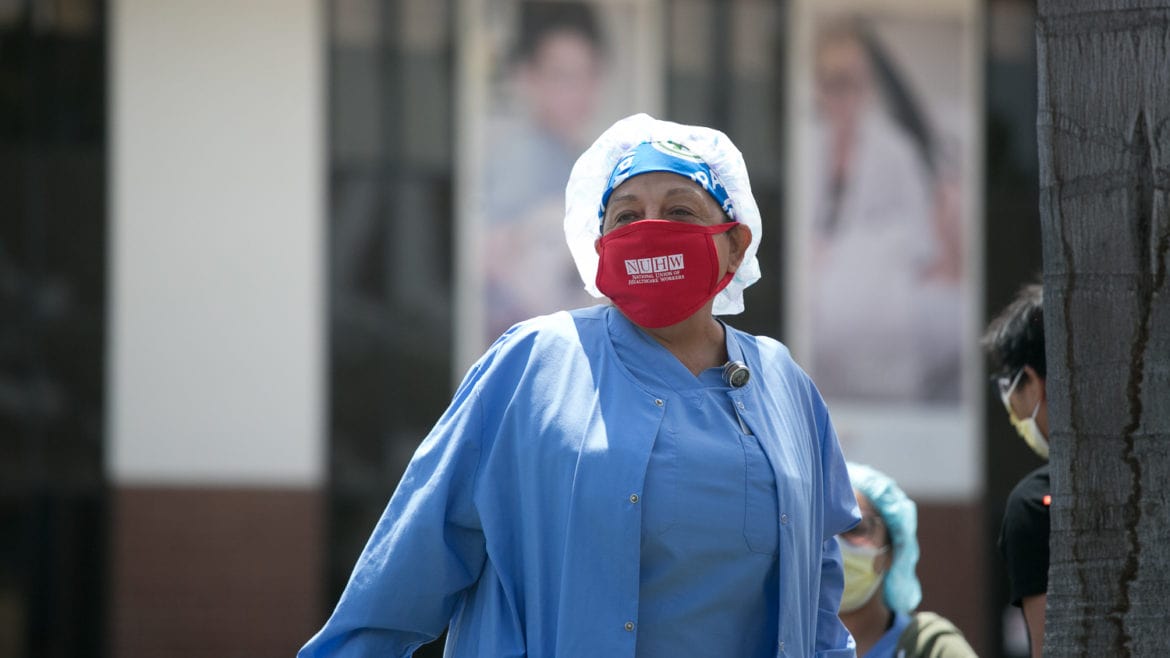 A healthcare worker stands outside of Fountain Valley Regional Hospital during the July 2, 2020 press conference.

Orange County’s Coronavirus cases and hospitalizations are seeing dramatic increases as hospitals around OC are being pushed to their limits, while experts warn hospitals could be overloaded.

“This is absolutely unsustainable and it’s going in the wrong direction. There’s too much growth. Even if you say, well not all cases are serious, we can’t be growing at this growth rate and not have serious consequences,” said UC Irvine epidemiologist Andrew Noymer in a Thursday phone interview.

The increasing virus transmission rates, which started a couple weeks ago, caused Gov. Gavin Newsom to put Orange County on the state watchlist in late June. Last Wednesday, Newsom closed all bars and indoor dining at restaurants. Movie theaters and similar entertainment venues are also shut down indefinitely, unless they can move operations outside.

“These trends are very concerning and we can expect the impact to our health care system in the coming days and weeks,” Chau said at a Thursday news conference. “A strain on the hospital system means a strain on the ability to care for all patients, both COVID-19 and non COVID-19 folks.”

And a Thursday situation report from OC Emergency Medical Services stressed the need to prevent hospitals from being overrun with virus patients.

“The current metrics show a clear reflection of the disease progression and we need a reduction in disease transmission to protect the hospitals,” reads the report.

The report also notes the burden has been shifted from Anaheim and Santa Ana — the two hardest hit cities in OC — to the rest of the county.

“All hospitals are impacted. We initially saw the highest degree of hospital burden in the hot spots of the county (Anaheim and Santa Ana), but as COVID-19 has become more widespread we are seeing the burden shift to hospitals based on their size, not just location,” states the report.

Hospital officials interviewed by Voice of OC typically direct reporters to the county Emergency Medical Services division for virus numbers, which has refused to release data breaking down how many virus patients are in each hospital.

Dr. Daniel Chow, an assistant professor at UCI, also noted the virus is beginning to impact the rest of the county at a higher rate.

“It’s becoming more distributed because it’s spreading itself throughout the community,” Chow said.

Chow, who’s also co-director for UCI’s Center for Artificial Intelligence in Diagnostic Medicine, charted out the infections on a map of Orange County.

Since there’s no vaccine for the virus and limited tools to slow the spread, Chow said people need to wear masks when they go out and try limiting their exposure to large groups.

“We really, really need people to be vigilant and not complacent,” Chow said.

“You’re basically filling a sink and the drain is open. On a normal basis hospitals will admit patients and discharge them faster than they admit — you’re never going to be overflowed,” Chow said.

But the virus clogs the drain, Chow said.

According to the OC Emergency Medical Services report, hospitals are beginning to plan for surge capacity, or adding more beds. Some of those plans call for tents with beds in them.

Chow said hospitals could be overloaded, despite enacting surge plans.

The Coronavirus has now killed 402 people in Orange County out of 21,517 confirmed cases, according to the OC Health Care Agency.

Nearly 1,300 new cases were reported Thursday, which officials have noted there’s a delay in reporting creating a backlog.

Because of the backlog, Noymer said he used a seven-day average and found the tests to positive cases ratio to be 4.4 percent daily increase. The daily case counts could double by July 18, he said.

“We really can’t rule out 2,000 new cases a day by the end of the month. Given that hospitals are already stretched thin, that is really bad,” Noymer said.

There are 691 people hospitalized, including 236 in intensive care units.

“So where we go from here is beds in tents,” Noymer said. “It’s not like you can’t send them to San Diego, San Bernardino, Riverside and LA. Because all of those counties have their own challenges.”

Nearly 290,000 tests have been conducted throughout OC, which is home to roughly 3.2 million people.

“This is not sustainable and I can’t tell you exactly what day things are going to burst, but I don’t think the dam burst will be like all of a sudden your readers hear cries in the streets,” Noymer said.

“At some point they’re going to have to set up some sort of emergency hospital in a hotel they commandeer or something. So it’s just going to be a slow process of coping basically.”

Chow, like his UCI colleague Dr. Saahir Khan, worries if there will be enough nurses to handle the incoming ICU patients.

“ICU also means a very, very small staff to patient ratio. So a normal hospital bed is normally eight-ish patients for every one nurse. In an ICU setting, you’re talking about two patients per nurse,” Chow said. “Working out the math, either we have to quickly find more ICU nurses or ICU nurses will be working extended shifts, double shifts.”

Khan, who treats virus patients, said the current ICU bed availability, which is 37 percent, is likely an overestimate.

“You need staffing for those beds, you need ventilators and you can come up with a plan that says okay we can open up x-number of ICU beds in a surge scenario, but in the real world, you need to be able to staff those beds and provide the resources that can care for patients. My sense is that, overall, our numbers on ICU capacity remaining is an over estimate.