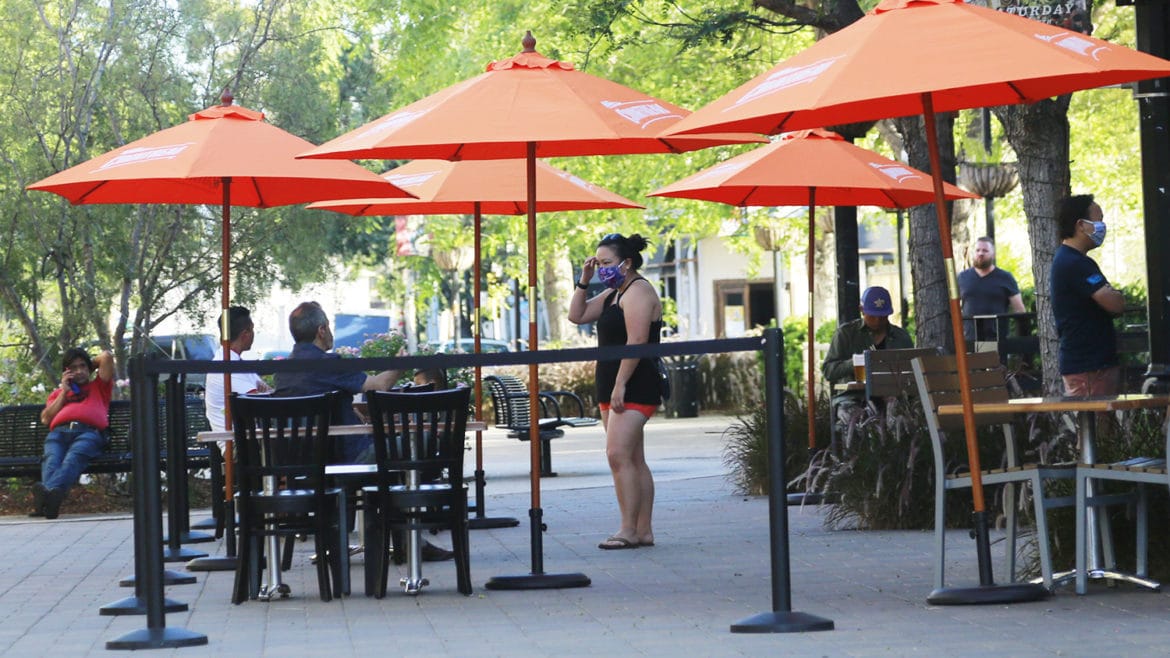 Orange County restaurants and movie theaters will have to limit their operations after Gov. Gavin Newsom updated statewide health orders that affect most Californians as coronavirus cases spike statewide.

“This doesn’t mean restaurants shut down, this means we’re trying to take activities … and move them outdoors, which is a way of mitigating the spread of this virus,” Newsom said at a Wednesday news conference.

The businesses are now required to move their operations outside, effectively shutting down movie theaters and other indoor entertainment venues. Restaurants are prohibited from doing indoor dining.

But many smaller restaurants don’t have the space for outdoor dining because they lack sidewalk or parking lot space. Restaurants will still be allowed to do carry-out and delivery services.

It’s unclear how movie theaters will handle the change and state guidelines call for a shut down if businesses can’t adapt to the new rules.

Newsom’s orders apply to counties that have been on the state’s watchlist for at least three days, like OC, and will last three weeks.

Chau issued his order about an hour before Newsom’s announcement.

“Being indoors for extended periods of time … increases transmission of COVID-19,” Newsom said.

The virus has now killed 345 people, including five new deaths reported Wednesday, out of 14,413 confirmed cases, according to the county’s updated numbers.

There were 542 people hospitalized, including 192 in intensive care units.

Over 7,700 people have recovered so far and roughly 241,000 tests have been conducted throughout OC, which is home to about 3.2 million people.

A slew of state regulatory agencies will be deployed to six regions throughout California.

Newsom said the “strike teams” will first work with businesses and counties that are flaunting the rules, but won’t hesitate to take enforcement action if people don’t comply.

“I think we have a responsibility at the same time to go after people who are thumbing their noses,” Newsom said. “To not only protect you as a customer of a bar/restaurant or any other facility, but protecting their workers.”

“This is not just talking about mask compliance. This is talking about compliance in our health and safety in our meat packing facilities. One should not put their lives at risk to go to work as an essential worker.”

Mark Ghilarducci, the Office of Emergency Services director, said his office will work with the regulatory agencies to gain compliance.

“As we’ve seen noncompliance … we will have these agencies and departments the governor mentioned leverage their regulatory authorities and enforcement authorities to enforce public health orders that are in place throughout the state,” Ghilarducci said.

Meanwhile, there’s been a raging debate over masks in OC, with many residents showing up to lobby the county Board of Supervisors to toss out state orders at the body’s Tuesday meetings.

Chau walked back a countywide mask order last month after constant pushback from some residents and questions from supervisors.

When the previous mask order was in effect, OC Sheriff Don Barnes said his deputies wouldn’t enforce it, but take an educational approach.

Newsom also has a monetary prong to his enforcement approach, which could mean some counties will miss out on $2.5 billion in state funding for much-needed programs like food stamps if county officials fail to enforce state health order.

“There’s $2.5 billion contingent on good behavior. So we wanna reward good behavior … we want to get fiscal consideration at the county level and then at the business level we wanna encourage good behavior,”  the governor said.

Dr. Daniel Chow, an associate professor at UC Irvine, created a YouTube video to address the common misconceptions about masks.

“I feel like this anti-masking phenomenon started in Orange County at the Board of Supervisors,” Chow told Voice of OC.

Chow, who’s also co-director for UCI’s Center for Artificial Intelligence in Diagnostic Medicine, said he noticed an increase in anti-mask residents showing up to supervisors meetings.

Before the statewide mask order came down from Newsom June 18, the anti-mask crowd shut down a news conference by a coalition of unions, who were trying to lobby to get the countywide mask orders reinstated.

Chow said he fears OC hospitals will soon run out of beds if the virus keeps spreading at the current rate.

“If that continues, like right now we still have beds in Orange County, but as people come in they’re going to occupy those beds and be there for a few weeks. What happens when those beds are full and someone has a car accident, or a stroke or someone else has COVID — that’s a nightmare situation,” he said.

“That’s one of those unimaginable things in America — that someone could die because we don’t have the resources to take care of them.”

“I don’t know when covid became political because it’s not — it’s all races, genders, economic backgrounds,” Chow said. “It’s affecting the entire community and the only way we can beat it is to act like a community.”