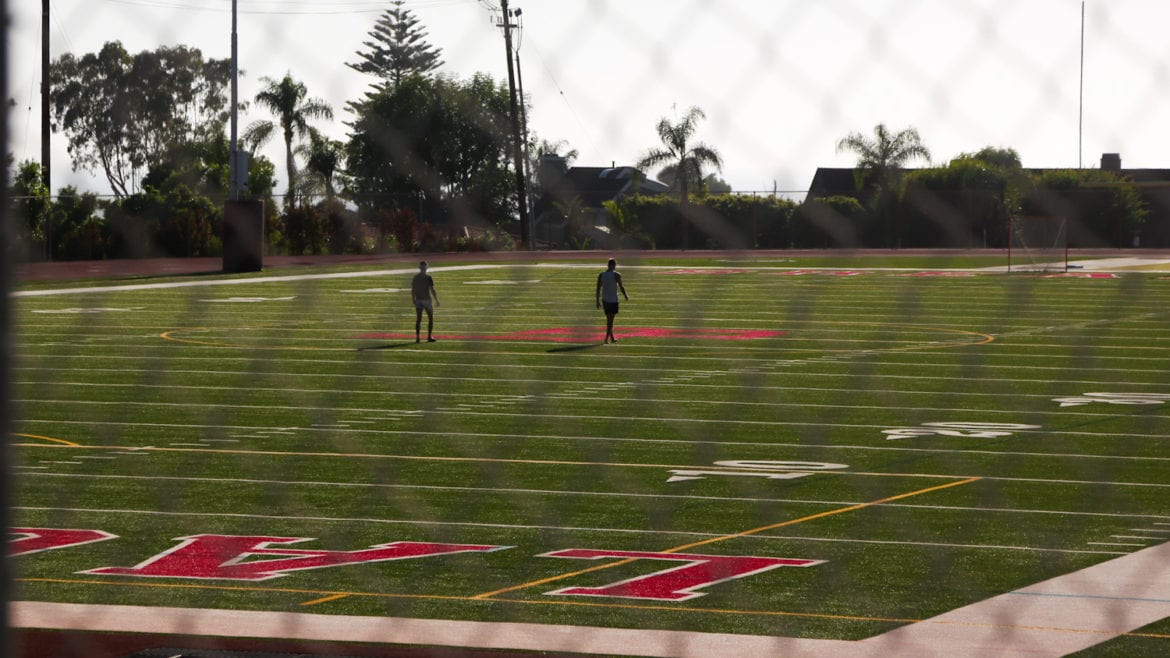 The football field at Laguna Beach High School on July 10, 2020.

There’s a lot of confusion in Orange County about youth sports right now, prompted in part by unclear reopening guidelines in June followed by an abrupt suspension by the County of Orange a few days ago, with no real public guidance, in a late afternoon press release.

Orange County officials announced the suspension of youth sports practices across the county Wednesday after allowing them to resume on June 15.

The county’s decision to postpone youth sports comes on the heels of the Voice of OC reporting on an advisory sent Monday to school district superintendents across the county by Jeffrey J. Riel, general counsel for the Orange County Department of Education, clarifying state orders regarding youth sports, including high school athletics conditioning activities.

Frank Kim, the County Executive Officer, said in a press conference Thursday that he had been in communication with the Department of Education before the letter was sent in response to a question from the Voice of OC.

All that has created confusion among parents and coaches.

Danita Chamaa, the general manager of Team OC, has criticized the County’s press release as “vague and poorly written.” She said in an email that it seemed the Voice of OC had more information than the county public information manager Molly Nichelson.

“I reached out to Molly Nichelson who told me she’s still waiting for information from the state and directed me to the state guidance on youth sports – it’s nowhere to be found, nor could I find any state announcements or orders regarding this,” Chamaa said in an email.

Team OC is a privately owned children’s multi-activity center in Costa Mesa that offers gymnastics and dance programs as well as day camps. Chamaa added she spoke with the County Department of Health and got some clarification but that they seemed unsure themselves.

“It’s just very frustrating and I’m sure we’re not the only business or only industry feeling this way. We’re all dealing with an uncertainty of a pandemic but it doesn’t help that our county department of health isn’t giving us clear and concise information,” Chamaa said in an interview.

Chamaa said that customers have called and emailed concerned about their kid’s fitness levels and emotional well being and facilities like hers have gone months without any kind of revenue.

The county’s Wednesday press release cited the state Department of Public Health’s guidelines on day camps and fitness facilities as the basis for allowing counties all across the state to resume such activities and notes that California had recently amended guidelines on youth sports practices, team drills and training.

The state guidance on day camps does not define what a day camp is.

The state guidance on fitness facilities clarifies that it does not apply to day care or child care services, youth camps, team or contact sports, schools and educational activities.

“Most organized activities and sports such as basketball, baseball, soccer, and football that are held on park fields, open areas, and courts are not permitted to the extent that they require coaches and athletes who are not from the same household or living unit to be in close proximity,” reads the guidance.

Team OC closed on Thursday but Chamaa said they hope to reopen again on Monday after clarifying with the County that they could if they meet the guidance on day camps, gyms and childcare centers because they don’t offer team sports.

“But we really don’t know for sure because we’re waiting for information from the state,” Chamaa said.

In an email to the Voice of OC, the California Department of Public Health Office of Public Affairs claims that youth sports were never allowed to reopen under the stay at home order.

“Youth sports and recreational team sports have not been allowed at any point under California’s stay-at-home order, which was issued on March 19 and continues to be in effect,” reads the email. “No guidance has been issued for these activities and they are therefore still not allowed.”

A subsequent email from them did not address questions from the Voice of OC as to why day camps can resume and youth sports can’t, what youth sports entails specifically or if they would clarify the confusion regarding the issue for the public online.

Molly Nichelson, the public information manager for the County of Orange, has yet to respond to questions from the Voice of OC regarding youth sports.

The article states that several counties were initially given permission by the state to allow distanced drills and conditioning before.

“As you can imagine, when the state provides that guidance and authority to one particular county – all the Health Officers, all the county executive officers, we all speak to each other regularly – So many of us began opening that program that was consistent with the guidance that some counties had received directly from the state,” Kim said at this week’s press conference in response to questions from Voice of OC.

The CDC has issued guidelines for youth sports.

The California Department of Public Health has yet to issue guidelines or a date on reopening youth sports activities and has indicated that guidance would be released in the future.