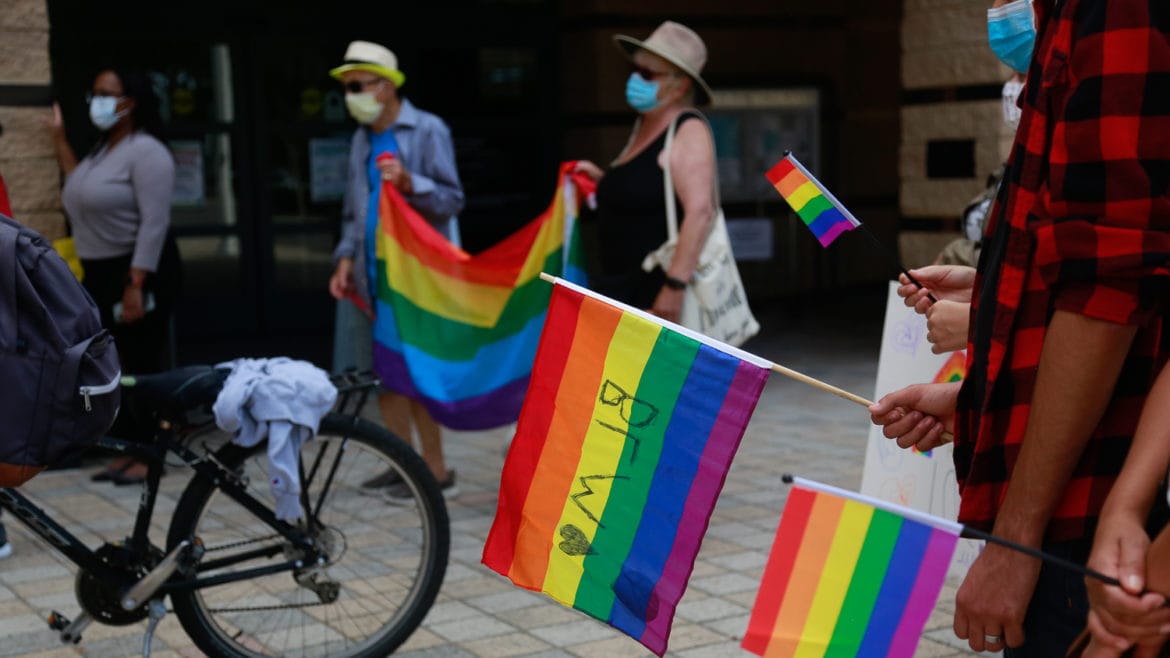 Protesters gather in front of Irvine City Hall June 23, 2020, to rally for flying the pride flag over the building.

The Irvine City Council unanimously repealed a portion of the municipal code against the LGBTQ+ community on Tuesday night, even as the city attorney brought up questions over whether the body had the power to do so.

The motion, brought forward by council members Melissa Fox and Farrah Khan, called for the portion that stopped the city from recognizing sexual orientation as a human right and prevented harassment over orientation being defined as illegal to be stricken.

“We’re living in a time where our future sustainability relies on inclusion,” Khan said. “Put an end to discrimination in our city.”

But the council’s decision may not hold up if challenged in court, according to City Attorney Jeff Melching.

The laws the panel sought to remove were put in place by a referendum, and under California law, even outdated legislation has to go back to the voters to be removed,  Melching said.

He also pointed out the council would need an ordinance to remove the code instead of a motion, which would require additional time to prepare.

Mayor Christina Shea, who was one of the initiative’s supporters when it was put forward in 1989, said she was opposed to sending it back to the voters.

“It’s been null and void since the early ‘90s,” Shea said, referencing several federal and state laws that overruled the piece of city code. “It’s like going out to the voters, digging up a dead dog, shooting it in the head again and burying it again.”

Fox and Councilman Mike Carroll, both of whom are also lawyers, disagreed with Melching’s interpretation, with Fox saying she would not settle for a note in the city code that the law was now outdated.

Melching said his only role was to advise the council of his legal opinion, and that any actions that were taken were their decisions.

“I’m not for or against anyone’s point, I’m just telling you what the law is,” Melching said.

Over the last year, Irvine has seen a dramatic shift in its recognition of the LGBTQ+ community after widespread calls from the public for renewed action to acknowledge the community.

In June 2019, the panel voted against flying the pride flag during pride month, with Carroll referring to the flag as a “spectacle of divisiveness.”

“As city leaders, we should not be inciting unnecessary and corrosive divisions in our community,” Carroll said then. “There’s no good reason for the city of Irvine to become involved. There’s absolutely nothing that Irvine can add to either side of the debate.”

But last month, the council reversed its position, voting 4-1 to fly the flag over City Hall for the remainder of June and to make it an annual occurrence, flying from Harvey Milk Day (May 22) to the end of pride month.

The city also officially recognized pride month for the first time this June two weeks ahead of the flag vote.

The council decided to move forward with the vote Tuesday after Fox brought up the point that the only challenges that could potentially come to their decision would be a lawsuit calling for the legislation to be restored to the old city code.

“Who in their right mind is going to come sue us to put this racist POS language back in our code?” Fox said. “Lets clean this up and move on.”