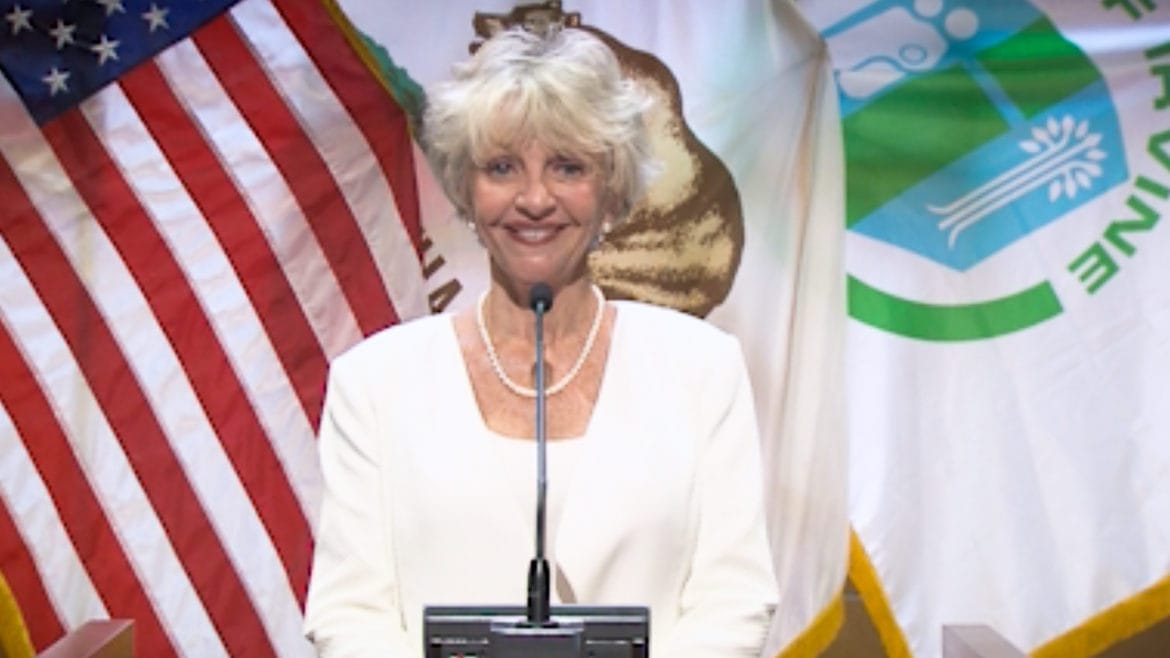 Mayor of Irvine, Christina Shea, holds a online press conference with updates on Coronavirus on July 15, 2020.

Irvine Mayor Christina Shea is being sued for a violation of her constituents’ First Amendment rights after blocking several residents on her FaceBook page who criticized her posted opinions on the Black Lives Matter movement and defunding the police force last month.

In a since-deleted post, Shea said that she had received emails from members of Black Lives Matter asking to reduce police funding and move the money to help support homeless programs and other community issues, but that she would not support that move.

“We have been named one of the Safest Cities in America for 15 years in a row and I will not agree to reduce our public safety funding especially after seeing the violence we have endured as a nation this past week,” Shea said.

Later that day, Shea also posted another comment that criticized a peaceful protest outside city hall, saying they were yelling “very rude comments,” and that a resident’s car was hit by one of the protestors.

“Protesters in the street blocking traffic and we are being asked to lessen public safety?” Shea said.

The posts received over 150 comments with a variety of opinions, but Shea blocked several that disagreed with her post.

One of the blocked commenters was Lamar West, an Irvine resident and software designer, who has called attention to the issue from both the Thurgood Marshall Bar Association, Orange County’s only Black bar, and the law firm Baum, Hedlund, Aristei & Goldman who are representing him in the suit against Shea.

“Like other educated people have mentioned it’s okay for you to support the movement and not defund the police but you don’t want to do either,” West said in his comments. “I can hear the racist ancestors of yours in this post and it’s sickening. Enjoy your position while it lasts.”

The primary argument in the case is over whether elected official’s social media pages function as a public forum, and multiple legal organizations have said that if it is open to the public and used by a politician to discuss policy then it cannot be censored.

One of the cases frequently referenced by legal experts is Knight First Amendment Institute v. Trump, a case from 2018 that saw the President sued for attempting to block commenters on his personal Twitter page that he regularly uses to discuss public policy.

The ruling in the case found that Trump’s decision to make the page public and use it as an official mouthpiece of his administration meant that commenters were entitled to voice their opinions in the comments.

The Knight First Amendment Institute was also one of the groups who asked Shea to unblock commenters.

Shea declined to comment, saying she had not reviewed the filing yet.

In the past, Shea has repeatedly defended her actions on the page, saying that it is her personal Facebook page and that she has a right to control what content is there, and that many of the accounts she blocked were fake.

“My family goes on that page, my grandchildren do and they’re not going to be reading that stuff,” Shea said in a phone call with Voice of OC last month. “They were calling me racist, using obscenities, they were threatening me, and I took the post down and I was told I have every right to do that on my private page.”

Karl Olson, a First Amendment and media lawyer from San Francisco, said that while social media functions as a bit of a “grey area,” Shea’s page does follow the guidelines of a public forum.

“Part of it’s an issue with what you can do with Facebook, and part of it’s a legal area, and that’s why it is a grey area,” Olson said. “For someone to call her a racist, that’s generally opinion. I think if you want to be the mayor of a city that kind of comes with the territory.”

Other politicians in Orange County, including congressional candidate Greg Raths, have faced similar criticism from commenters, with renewed calls for open access to their pages.

The case is set to move to court on Aug. 24, with West filing a preliminary injunction against Shea that would force her to unblock him and other constituents for the duration of the case if approved by a judge.