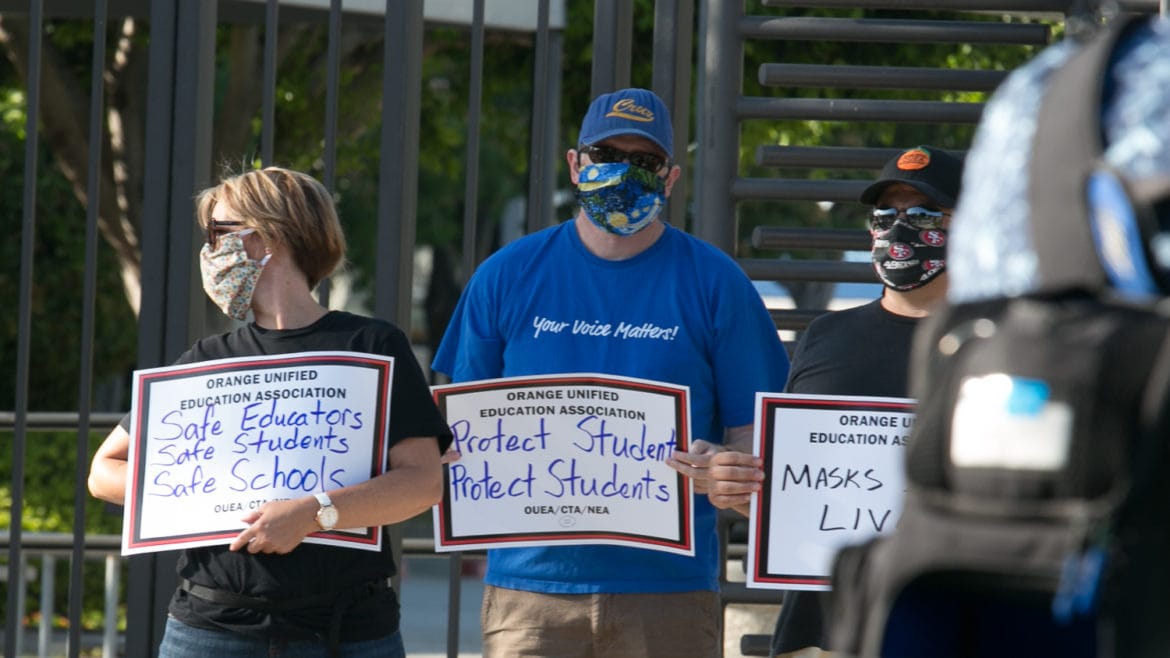 Protestors hold signs outside the Board of Education building in Costa Mesa during the board meeting on July 13, 2020.

Gov. Gavin Newsom ordered most large counties to implement online learning, ending a raging debate in Orange County over whether or not children should physically go back to school during the coronavirus pandemic.

“We are now putting out guidelines that schools can open for in-person learning when the county is off our monitoring list for 14 days,” Newsom said at a Friday news conference.

OC has been on the watchlist for roughly three weeks, along with most other large counties in the state, because of the rising number of cases and hospitalizations. Because of that, no OC schools can physically reopen, unless the county gets off the monitoring list and stays off for two weeks.

“We are now putting forth guidelines that say based on the data, based upon the background spread, the community spread of the virus, that if you are not on that monitoring list, you can move forward as a county, if you choose, physically open your campus,” Newsom said.

Newsom said he wants online interaction to mirror in-person learning as much as possible.

“We want daily live interaction with teachers and other students,” he said.

Newsom warned that once counties like Orange are off the monitoring list and local schools are permitted for in-person learning, they still won’t be in the clear. If multiple classroom “cohorts” in the future were to have positive cases, he said it “would trigger criteria to consider or mandate the closure of that school site” again.

It’s unclear when Orange County will be able to get off the watchlist because OC has been exceeding the 8% testing positivity rate and less than 25 cases per 100,000 people thresholds.

“It’s a mess, we’re in a mess,” Boden-Albala said in a Thursday Voice of OC virtual panel.

“Our hospitals are filling up,” she said. “We’re in a bad situation.”

Meanwhile, the Coronavirus has now killed 469 people out of 28,309 confirmed cases as of Friday, according to the OC Health Care Agency.

There are also 682 people hospitalized, including 245 people in intensive care units, as of Friday — down 29 overall from Thursday.

Just over 341,000 tests have been conducted throughout the county, which is home to roughly 3.2 million people.

The Orange County Board of Education recommended children go back to school without masks or social distancing, renewing the heated mask debate in OC.

The recommendations kicked off a hailstorm of national media coverage and the panel of experts walked away from the report board members pointed to when voting on the suggestions.

Voice of OC reporting found the report was instead prepared by the board president and an outside writer with nearly no input from the panel.

The controversial guidelines ran against the county department of education’s own guidance, and multiple school districts have already announced they will not be following any of the board’s recommendations, choosing to implement strict safeguards on campus or start the school year with online learning.

School districts in Santa Ana and Anaheim decided this week to start the school year with online learning.

Other districts have rolled out plans to offer both virtual learning as well as a hybrid option that would put students in the classroom on some days and on others they would learn from home.

The California Teachers Association, a statewide union with over 300,000 members, sent a letter last week to state legislators expressing its concerns.

“The recent surge in the infection rate and the closure of indoor activities in 26 counties gives us pause around the state’s preparedness for safe in-person school instruction in a short six- to eight-week time frame,” reads the letter.

“We are deeply concerned that politics are being played with the lives of children and the educators who serve them,” states the letter.

The union also calls for more funding to help schools prepare for the return to classrooms and get the necessary personal protective equipment and other resources needed.

Brandon Pho is a Voice of OC staff writer and corps member at Report for America, a GroundTruth initiative. Contact him at bpho@voiceofoc.org or on Twitter @photherecord.